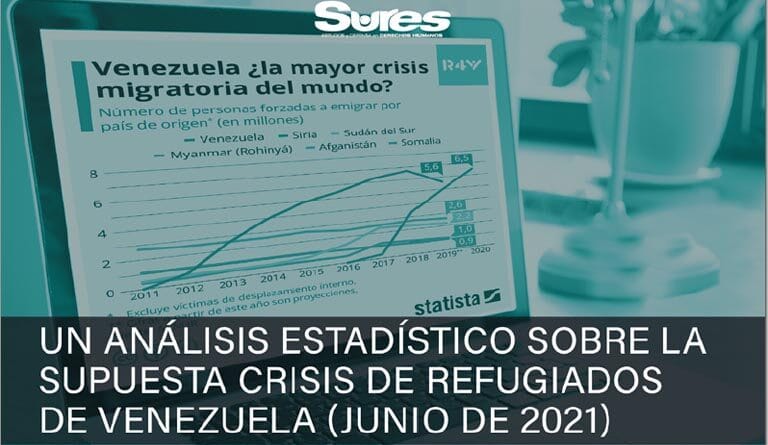 There is no Venezuelan refugee crisis, states a research report published by Sures, a Venezuelan NGO dedicated to research and defense of human rights. The study is based on data published by the Department of Economic and Social Affairs, which was updated in 2019, as well as data published in May 2021 by the Refugees and Migrants of Venezuela Coordination Platform (R4V).

Sures published in its Twitter account that “based on data from the Refugees and Migrants of Venezuela Coordination Platform (R4V), only 2.81% of the Venezuelan population abroad is under refugee status. Therefore, it is not possible to speak of a ‘refugee crisis’ in Venezuela. Our statistical analysis demonstrates this.”

RELATED CONTENT: Venezuela Labels Migrants Donor Conference in Canada as a Media Farce: Where is the Money?

The Sures study titled A Statistical Analysis of the Alleged Refugee Crisis in Venezuela reveals that the exaggeration of a supposed refugee crisis ”is based on exclusively political reasons, and has been maintained through pressure exerted by political actors with little interest in contributing to a resolution or the management of the circumstances of human movement that the country is experiencing.”

The Sures research revealed that ”the proportion of refugees among the numbers of Venezuelans abroad is clearly irrelevant from a statistical point of view.”

The report points out that ”even if it is assumed that the total number of Venezuelan migrants is 3,648,206, which is the sum total of all legal residents, asylum seekers and refugees in foreign countries, according to the numbers provided by Refugees and Migrants of Venezuela Coordination Platform, the percentage of refugees in that sum total would be 4.35%.”

”If a larger figure is taken into account, like 5,643,665 people, which also includes the estimate of irregular or unregistered migrants, then the percentage of refugees would drop to 2.81%,” continues the report.

And if from both figures ”we subtract the people benefited with protection in Spain, who cannot be considered refugees according to international laws regarding refugee status, we obtain percentages of 2.29% and 1.48% respectively.”

In contrast, the Sures research considers that there is a refugee crisis in Colombia, “because over 220,000 Colombians with refugee status are recognized only among those who currently reside in Venezuela and Ecuador, which clearly surpasses the number of Venezuelan refugees, who are less than 160,000 persons in total.”

The study highlights that “Venezuela is home to more refugees than any other Latin American and Caribbean country as well as Spain, with the sole exception of Peru, where there seem to exist particular reasons for preferring to declare expatriates as refugees, as a strategy to regularize migrants.”

The Sures report emphasizes that the international community cannot continue to sustain the Venezuelan refugee crisis narrative, because “many of the Venezuelans abroad who could opt to request refugee status, for some reason or other, prefer not to, and opt for other forms of legal residence instead.”