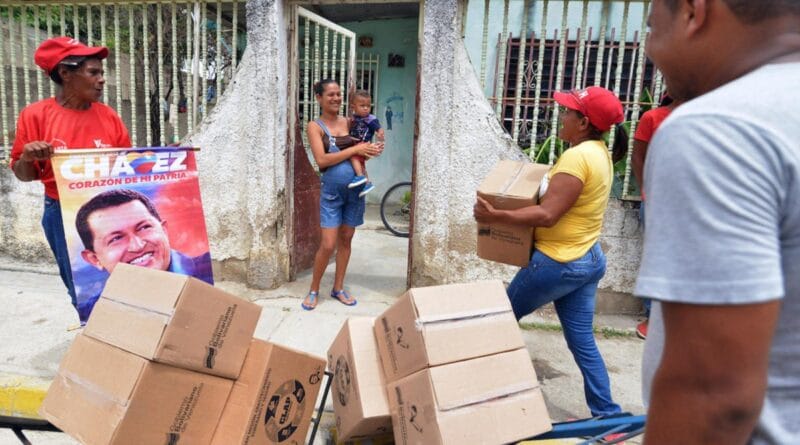 Last week I had the unforgivable impudence to celebrate the strength and conviction of my colleagues from CLAP and the ways that we have found and shared to resist and overcome the bomb blasts, in the form of sanctions and blockade, of this war that the gringos have imposed on us. I affirmed and I reaffirm myself, that with every little thing that we invent to replace something that they have taken from us, we are defeating them and we are strengthening ourselves. We are conquering fear.

I tell these things from my middle-class amazement, because I was born by the side of those of us who go through life with little work. Those of us who believe that the greatest sacrifice in the world is “burning the midnight oil” in a university, as it is also the greatest of our achievements.

The first time I ran out of gas, I found myself facing the abyss. Going from the four burners in my kitchen to a borrowed electric stove that started to smell like burned plastic as soon as I tried to boil the spaghetti water, made my day bitter. My middle class head in shock, in crisis, with a lump in my throat irritated by the smell of plastic from the main cable of the stove that finally melted, leaving my spaghetti adrift in a water that didn’t finish cooking it.

It has been gas, water, it has been electricity, the most terrifying version of which we all lived last year with the mega blackout. It has been the economic war, the bachaqueros, leaving the supermarket crying with my daughter’s hand clenched in mine when an avalanche of people passed over us because they were selling out the rice. Now it is also gasoline . . .

With gasoline and gas, as with everything else, denying the blockade is to not understand anything. When one sees Pompeo, Abrams, General Kelly, Brownfield, Bolton and his lap dogs, Borges, Ledezma, Guaidó, Vecchio, Lorenzo Mendoza . . . they promise us suffocation, war, promise to paralyze the country, when we see the SouthCom block our coasts so that not a drop of anything gets to Venezuela, do you seriously believe that the problem is corruption?

When the price of oil was at $100, when the war was not even from afar the desperate plan of demolition by suffocation, when it was easy to be a revolutionary because good living was subsidized by the abundance of resources and by the new distribution that Chávez lovingly arranged. When the famous oil droplet, more than a drop, it was a cataract and gave to living at such a gallop that sometimes it was a bit of opulence: twenty-somethings just hatched, middle-class professionals, people who found themselves touring Europe twice a year, convinced that this was not an extraordinary moment, but an acquired right, that this was THE revolution. State-of-the-art technology, exotic food, craft beer, single malt whiskey, others over a hundred years old. They were all foodies, all sommeliers, all gourmet. I say it without irony, I say it because that is what their Facebook walls presented, interspersing photos and phrases of Lenin and El Che.

People who did not imagine that reality is always different: that revolutions are not that, that this “well-being” has to be punished, that the redistribution of wealth, whether by lax hand or with austerity, is punished, that for that moment of abundance that made us the happiest country in the world, Chávez earned a death sentence. That all the countries that have dared to do what we are trying to do have been blocked, crushed, destroyed until they become lumps of bloodied dust . . . That the revolution is also, and very much, receiving and giving blows, and that we are fighting against a murderous and ruthless system. The compañeros do not like that part very much, and it is logical, it is very scary and it is normal, nobody condemns them for that.

The smaller evil is being with an empty gas cylinder and an electric stove shorting out, but that is an indication of what may come. It is there when what we took for granted is no longer so settled, when we have to begin to imagine — and face — the hazardous daily life of a rebellious country on the battlefield. That is when the greater fear covers us. It is when all the bombastic and inspired declarations glorifying the resistance of the Cuban people against the vile imperialist blockade, melt in the mouth. Now the glorious resistance is up to us, and that is very hard because we know what the Cuban people and other blockaded peoples lived through and are experiencing. I have felt that cold sweat that paralyzes.

I celebrated last week from my middle class amazement that life has solutions to problems and that you have to look for them. Today I continue speaking from there because I know exactly what I am talking about, because I am middle class and because I know, and every day I verify it, that some of us came to believe that the revolution was to make us middle class under the nefarious slogan of having “quality of life” , which has nothing to do with “the good living” (buen vivir) of which Chávez spoke.

So, among those of us who knew no more sacrifice from this revolution than being erased by family and friends from their Facebook, there were those who saw that the revolution was not that linear thing that supposed a continuous, safe ascent, an evolution without brakes or shocks towards the desired “quality of life”; Today, in front of the empty gas cylinder, they turn to social networks to show theeir discontent, to explain to everyone who wants to give them likes and retweets, that this is not what Chávez wanted. “Of course that is not what he wanted!” But it is what he would also have had if he had not left us so soon. They went from support in joy, to support in hatred, harassment, gossip, in the projection of all their frustrated dreams.

The arrogance of all life sprouts: they proclaim themselves in “the voice of those who have no voice.” Someone tweets from an apartment in Caracas, with direct gas, his fury against those of us who soften beans with firewood. They even call us ecocides. They guard their fear on behalf of a people that is not afraid, nor disgusted, when it comes to seeking solutions. They tweet on behalf of Isaura, my CLAP colleague who was left without a job in this pandemic along with her husband, and with three children to raise. They tweet the anger that Isaura does not have and they do it on her behalf and on behalf of all those who like her are receiving the worst part of this pain they are giving us. They are outraged by Isaura and her wood stove, and her planting of aubergines and Margarita Island peppers. They are outraged and have already done their part. Her revolutionary militancy is called “criticism” and now “empathy”, and it is expressed by insulting anyone who celebrates the combative spirit and the level of consciousness of millions of Isauras who do not break. She not only cooks with firewood and sows in her yard, but also delivers the gas — when there are gas days –, she delivers the CLAP bags to her neighbors, and collects the food containers of the community children every morning to take them to school, where she will go to look for them later, filled with lunches from the PAE food program. “Open your eyes, Carola”, “get out of Caracas and walk the street”, “look at your window and look at the people on foot, everything is justifiable from the sweetness of power”, they tweet.

I would like to see them in front of Isaura, disarmed by her sweet smile, by her oriental spark, by her joy, by her strength, by her conviction that whatever it is, she, her family, her community, are not going to resign themselves. That if it is with firewood, then it will be with firewood, that if it is raw, well it will be raw, that the sardine does not bore them, that the pumpkin from the yard always tastes good. Damn, you have to tweet for Isaura, to make her understand that this is not quality of life, so that she becomes discontent and does not vote, so that she begins to militate for defeat!

*The Kiki that I was, sometimes brings me tachycardia and many anguishes and fears, but my antidote, my ground wire, are my colleagues from CLAP: simple, strong, convinced, hard-working and loyal people who pulverize any vestige of city pride, of middle class fear that could remain in me.

They accuse me of not having empathy and I certainly don’t. Not with the demoralizers who speak for those who are not demoralized. Not with those who complain from a distance imagining distant problems and projecting their inability to deal with them. Not with those who pretend to be “the voice of those who have no voice,” to deny them, to invent a weakness and fatigue that they do not have. Not for those who deny the war, or for those equidistant between the blockade and “inefficiency”, for them no empathy.

For those who fight, for those who do swallow wood smoke, for those who assume their difficulties as battles to win and are winning, for those who fall and get up a thousand times, for those who not only solve for themselves, but for their community; for them my empathy, all my love, all the respect in the world and this gratitude, which does not fit in my chest, for letting me fight this fight, side by side, with them.

Featured image: Photo: Ministry of Communication and Information of Venezuela