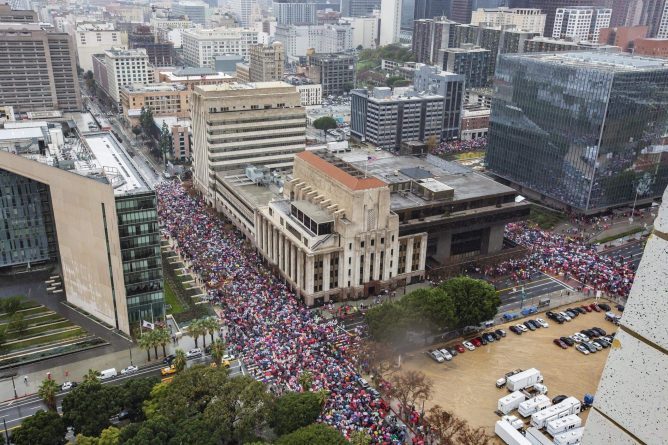 Only about a third of Los Angeles Unified students showed up to school Monday, the first day of a teachers’ strike, with many staying away despite assurance from district officials that all campuses would be in full operation.

The school district said 141,631 students came to campus, based on preliminary data. Officials said 54 of the district’s 1,240 schools had not yet provided attendance figures.

The low attendance numbers capped a day of disruption across the city. But it also helped the skeletal staff that managed many of the schools.

About 31,000 members of the teachers union had agreed to walk out to try to win smaller class sizes, more support staff at schools and better pay.

Thousands of picketing teachers and other union members — many of whom had arrived at their schools before sunrise — joined the mid-morning downtown rally in the chilly rain along with some students and parents. Police estimated the turnout at 20,000. The massive group then marched roughly a mile to school district headquarters on Beaudry Avenue.

“We’re marching for the future of public education,” he said. “No one’s doing this for fun. We’re missing our kids. It’s raining. We’re not going to get paid.”

The strike became inevitable when negotiations broke off late Friday afternoon between the L.A. Unified School District and United Teachers Los Angeles after more than 20 months of bargaining. Supt. Austin Beutner called for an end to the strike during a news conference Monday morning and said the district remains “committed to resolve the contract negotiations as soon as possible.”

Gov. Gavin Newsom called on both sides to find a deal.

“This impasse is disrupting the lives of too many kids and their families,” Newsom said in a statement. “I strongly urge all parties to go back to the negotiating table and find an immediate path forward that puts kids back into classrooms and provides parents certainty.”

L.A. Mayor Eric Garcetti said that enough progress has been made in negotiations to put a deal within reach.

“This is the time to make an agreement,” he said. “There is not much that separates the two sides. And there has been movement toward what the teachers have demanded and what the district can afford.”

In an effort to avert the strike, district officials sweetened their previous contract offer Friday based on improved funding for all school districts in Newsom’s state budget proposal unveiled last week. The district also hopes for a boost from Los Angeles County supervisors, who could vote Tuesday on a plan to give L.A. Unified up to $10 million for nursing and mental health services.

The latest district offer included lower class sizes by about two students in middle schools, a librarian for every secondary school, an extra academic counselor for high schools and a full-time nurse for every elementary school. The district now pays for one day of nursing per week, although many schools use discretionary funds to provide additional days.

The increased staffing, however, would be guaranteed for only one year. District officials said this was necessary because the funds are coming out of a one-time reserve.

“We made our last proposal to UTLA on Friday, which was rejected,” Beutner said. “They walked away from bargaining. We would encourage them, we urge them to resume bargaining with us, anytime, anywhere, 24/7.”

For UTLA President Alex Caputo-Pearl, the temporary nature of the increased staffing made the proposal a nonstarter. The two sides are so far behind in negotiations that even if they reached a new three-year deal this week, it would be in effect for only 18 months. The previous contract expired in June 2017.

During the last teachers’ strike, about half the district’s students went to school. The plan at many schools for this strike is to gather students into large groups in common areas like gyms, auditoriums and multipurpose rooms so they can be supervised by fewer adults. It’s not clear how much learning will be going on outside of the real-time civics lessons happening on the sidewalks.

The day did not follow normal routines as volunteers, an estimated 400 substitutes and 2,000 staffers from central and regional offices filled in for 31,000 teachers, nurses, librarians and counselors. At 10 schools, nonteaching employees are taking part in a sympathy strike, which created additional headaches as administrators struggled to manage such tasks as preparing and serving meals.

Some students and parents opted to join teachers on the picket line. Cherie Sanchez, 48, huddled with her son and daughter — in raincoats— outside El Sereno Middle School as the protest reached boisterous levels around them.

Sanchez, an account manager for a software company, said she will take time off work to care for her children at home while the strike continues. They plan to picket with the teachers in the morning and read at home the rest of the day. She said she’s advocating for more funds for the education of students with disabilities because her husband is a special ed teacher.

“Public schools are expected to support special needs students but without the resources to do so,” she said. “For me, the problem is the privatization of charter schools and the large class sizes. I want smaller class sizes for my kids.”

For Laleda Hines, 31, a food service worker, it was awkward to walk into 93rd Street Elementary School with her 11-year-old daughter, Naomi, past teachers who had gathered in front of the campus, she said.

Hines said she doesn’t have anyone to watch Naomi while she’s at work, so she leans on the school not just to educate her daughter, but also to watch her during the day. While she supports the teachers and said they deserve more pay and smaller class sizes, she said, she was conflicted by some of their other demands because the school district has said the high costs would lead to insolvency.

“If the district has no money, then there’s no job for me,” she said.

Some students who had intended to go to school were torn when they saw their teachers picketing outside. Two Los Angeles school police officers who stood inside the doors at Marshall High told a student who approached the exit to watch the teachers that she should remain on campus. If she wanted to leave, one of the officers said, she shouldn’t come back. Officers said they wouldn’t stop students who left, but students were not supposed to flow in and out of the school.

At Venice High School, senior Salvador Molina and six other students gathered at the front entrance to brainstorm how to get more of their classmates off the campus. They had opted to attend school, but decided to leave when their principal directed them to the gym.

“I’m trying to plan a trip to the museum,” Molina said, adding that he could take the Metro to the Natural History Museum, where he could “learn something.” A few hours later, the entire group made it to the museum, which has offered free admission to LAUSD students during the strike.

The teachers union continues to push for more hiring to make class sizes smaller and give schools needed support services — such as full-time nurses and librarians at every middle and high school. The union and district are not that far apart on salary. L.A. Unified is offering 6% spread out over the first two years of a three-year deal. The union wants 6.5% all at once, retroactive to a year earlier.

Kevin Alfaro, a social studies teacher at Kennedy High School in Granada Hills, said his classes are just too big and students end up being the victims. His four advanced placement government classes have 40 to 41 students each, he said.

“That’s a lot for an AP class,” Alfaro said. “Class sizes have gone up a lot. Everyone thinks it’s the pay increase [at the heart of the strike]. That has a lot to do with it, but class size is the main thing.”

Union officials on Monday called on federal and state leaders to increase school funding, and on the Los Angeles Unified School District to spend its reserve as well as new funding identified in the governor’s proposed budget.

“The eyes of the nation are watching, and educators and nurses … all over the country have the backs of the educators in L.A.,” American Federation of Teachers President Randi Weingarten said. “We need the conditions to ensure that every child … gets the opportunity he or she or they deserve.”

Physical education teacher Lin Joy Hom pulled up to the gate that leads to the Marshall High parking lot before sunrise with “UTLA strong” emblazoned in red letters on her car windows. While class sizes are her No. 1 concern, she said, she also wants every campus to have a school nurse every day. Marshall High doesn’t have a full-time nurse, she said.

“I can’t tell a kid, ‘Don’t get hurt on Tuesday because there’s no nurse,'” she said. “We need a nurse every single day.”

The chilly morning and steady showers did little to dampen the resolve of the group gathered outside the Ramon C. Cortines School of Visual and Performing Arts at the start of the school day. Survivor’s “Eye of the Tiger” blared from a speaker as a picketer thumped on a drum. A passing car honked to the beat. Another motorist pressed on his car horn and held his fist out the window as he passed.

At Wilshire Crest Elementary — a small school of about 150 students in Mid-Wilshire — more than 20 teachers and some parents braved the rain to send a message.

“We have to let people know that we mean business,” said special education teacher Lynette Bickham-Tilley. “We’re in the trenches and we don’t even have supplies all the time. All we want is a fair shot.”

Although attendance across L.A. Unified schools was sparse, there were many parents who sent their children to school with little hesitation.

“I think it’s important, strike or no strike, that our kids continue their routine,” said Stephanie Lee, 45, who waited for the final bell at John Burroughs Middle School as rain pelted the windshield of her minivan.

Lee supports the teachers, but also thought it would be a mistake to shield her 11-year-old daughter, Erin, from a strike, which could itself be educational.

“My daughter told me her teachers have shared information about the strike in class, and I think it’s great she’s aware,” Lee said. “I like that she knows the bigger picture of what’s happening.”

A social worker who lives in Koreatown, Lee said it helped that the school’s administration continuously kept her updated the week before the strike through texts, phone calls and emails.

“I trusted they would have the right plan in place.”

In the afternoon, the school day like no other was done.

One by one, the children ran to their parents at at 99th Street Elementary School. As the families walked away together, parents wanted to know if their children’s teachers had been at school. They had not.

Joel and Ilcia Martinez asked Rebecca, 7, what she had done in class.

“Did you color?” Ilcia Martinez asked.

“We watched a movie too,” she said.