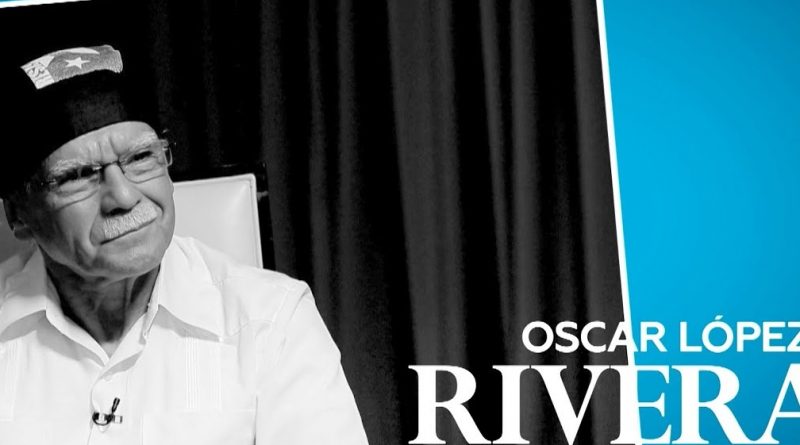 In this new edition of ‘Talking with Correa’, the former president of Ecuador talks with Oscar López Rivera, a controversial icon of the struggle for the independence of Puerto Rico. His prolonged imprisonment, the ethical implications of the armed struggle in the anti-colonial context and the validity of the Puerto Rican independence cause will be centered in this conversation.

Oscar López Rivera was one of the main leaders of the National Liberation Armed Forces (FALN) of Puerto Rico. He was jailed in the US from 1981 to 2017, for more than 35 years, sentenced for seditious conspiracy, interstate transportation of firearms and conspiracy to transport explosives with the intention of destroying government property, among other crimes.
During the first part of this talk, the activist explains that his independence spirit was forged after participating, as a soldier in the US army ( a country he had reached as an immigrant at the age of 14) in the intervention in Vietnam. He then discovered similarities between the Vietnamese people and their native Puerto Rico, and gained a vivid experience of the true character of American foreign policy. “Then I began, little by little, to fight for the independence of Puerto Rico,” López Rivera adds.

The end justifies the means?

At this point in the conversation, Rafael Correa openly questioned López Rivera about the violent means used in his struggle for independence. The activist then evoked the bloody attack carried out by the FALN in the ‘Tavern Fraunces” in New York (USA), in which four people died and several dozen were injured.

The former FALN leader indicates that this attack, in which he did not participate in any way – since, as he insists, each cell of the organization was completely autonomous – was in any case a response to an FBI operation in Puerto Rico, in which a 28-year-old boy and an 11-year-old boy were killed. López Rivera further emphasizes that, in relation to the colonial struggle, it must be understood that “the colonizer has no right to colonize, and that the colonized has the right to fight for his independence using all means at his disposal, including armed struggle.”
“The double standards of the hegemonic countries are clear,” Correa replies, noting that “there have been many attacks, not only in Latin America, but throughout the world, there has been terrorism and violence to destabilize governments and create fear and uncertainty, but we cannot fall into their same practices. “

RELATED CONTENT: Puerto Rico: Who is the Corrupt One?
The Ecuadorian ex-president also affirms that ” armed struggle is a legitimate resource in a colonized, exploited and repressed country”, but instead questions the justification of “random violence amid civilians” exercised in attacks such as that of the FALN in NY.

López Rivera then admits that such violence lacks “absolute” justification. In any case, he concludes this matter with a personal statement about the terrorist acts that were committed in the context of his struggle: “My hands are clean, no one’s blood is on them. But I did belong to an organization that carried out activities by which human lives were truly lost.”

The low popular support for the cause and its motives

Later, Correa will put on the table another uncomfortable truth: among the options that the Puerto Rican population has been consulted about their relationship with the US. – that of becoming part of the country as one more state, that of remaining an associated free state, or that of becoming completely independent – “this last option is always in last place, that is, there is no popular support for independence“, the former Ecuadorian president indicates.

López Rivera replied that this has “a reason,” and refers to “the repression that the US has practiced in Puerto Rico against the independence workers.” “From 1898 until today there are Puerto Ricans who are imprisoned for political reasons,” says the activist. In addition, when Correa insists on the results of these democratic processes, the interviewee replies that ” in no colony is there democracy ” and ensures that “democracy in Puerto Rico does not exist”.
In that same sense, López Rivera indicates that “the United States instilled in Puerto Rico the fear of independence” and extended a mentality of obedient colonization among its population. “Removing from the human brain that colonized mentality is very difficult,” concludes the activist.
To know all the details of the dialogue between Rafael Correa and this historic leader of the FALN, we recommend that you see the last chapter of ‘Conversing with Correa’ in the video above.