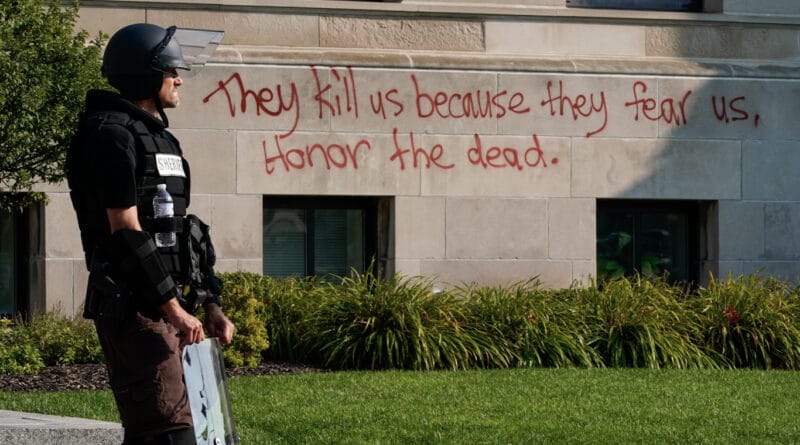 Being in the midst a summer of unprecedented racial and political unrest was apparently not enough to stop Kenosha police from emptying seven rounds into the back of yet another unarmed black man.

The police officers responsible for shooting unarmed black man Jacob “Jake” Blake yesterday have been placed on administrative leave, Wisconsin Attorney General Josh Kaul confirmed today. The officers involved in what Kaul terms an “officer involved shooting” were said to be cooperating with investigations, according to police. This, for many, was not an adequate response. “Kenosha cops who shot Jacob Blake 7 times in the back are given a paid vacation,” reacted writer Arun Gupta on Twitter, reflecting the mood of many in the small Wisconsin city.

Blake was reportedly acting as a peacemaker at an incident yesterday, trying to break up a fight between two women. However, after police arrived, they tased him and proceeded to draw their firearms on him. Video of the incident shows Blake walking towards his car pursued by police. As he opens the door, an officer grabs his shoulder, at which point at least one officer begins repeatedly emptying rounds into his back from point blank range, to the screams of the many bystanders watching. Blake falls forward into the car, activating the horn. Remarkably, he did not die immediately and was taken for emergency treatment to a hospital in nearby Milwaukee.

Civil rights attorney Benjamin Crump, the lawyer representing George Floyd, claimed that Blake’s three young children were in the car at the time police shot seven rounds into it. “They saw a cop shoot their father. They will be traumatized forever. We cannot let officers violate their duty to protect us. Our kids deserve better,” he said. The extremely graphic video of the event is included below.

Jacob Blake was shot in the back 7 times. This is what they’re doing in Kenosha.

Unarmed. And was breaking up a fight. But he gets shot.

This was a shoot to kill. And yet, people will still try to justify this.

Wisconsin Governor Tony Evers condemned the police actions, stating that Blake is “not the first Black man or person to have been shot or injured or mercilessly killed at the hands of individuals in law enforcement in our state or our country.” “I have said all along that although we must offer our empathy, equally important is our action,” he added. “In the coming days, we will demand just that of elected officials in our state who have failed to recognize the racism in our state and our country for far too long.”

The afternoon’s shooting sparked spontaneous protests in the city’s center that evening, with hundreds of people converging, chanting, “Whose streets? Our streets,” and, “No justice. No peace. No crooked police.” While most of the demonstrators were peaceful, riots also began to flare, with businesses destroyed and police cars vandalized. Large dump trucks were also set on fire during the evening and one police officer was struck in the head in a protester involved incident. Riot police and SWAT teams were called in around the city’s courthouse and a curfew was declared, with authorities shooting tear gas at protesters.

I took this video while passing the #Kenosha County Courthouse just before 1 a.m.

Yesterday’s Kenosha shooting immediately drew parallels with the killing of George Floyd in May, an event which sparked a summer of protest and discussion across the United States, changing the national conversation around policing. But in the previous case, Minneapolis officer Derek Chauvin was quickly fired, as police officials sensed they had little other option, given the scale of the response. The officers involved in yesterday’s shooting, however, have been given what effectively amounts to paid leave, suggesting that authorities do not expect as much of a public pushback as in the George Floyd case.

#BREAKING: Large crowd has formed outside the scene of an officer-involved shooting in #Kenosha. @KenoshaPolice say they a man is seriously hurt. People are now breaking the windows of cop cars. Warning – expletives @tmj4 pic.twitter.com/pKqbSKrZQY

Police kill, on average, about 1,000 people every year across the United States, more than all other developed countries combined. In many European countries, police shootings are virtually unheard of because they do not carry guns. This year, however, American law enforcement officers have already killed 731 people, meaning they are well above average. Being shot by police is a leading cause of death for young black men in the United States, who are three times more likely to be victims of police violence than white men. In 99 percent of all police shootings between 2013 and 2019, officers involved were not charged. Far fewer were convicted. Judging by the initial response from the Wisconsin Attorney General, it does not appear particularly likely that the unnamed officers involved in yesterday’s violence will be among the one percent.