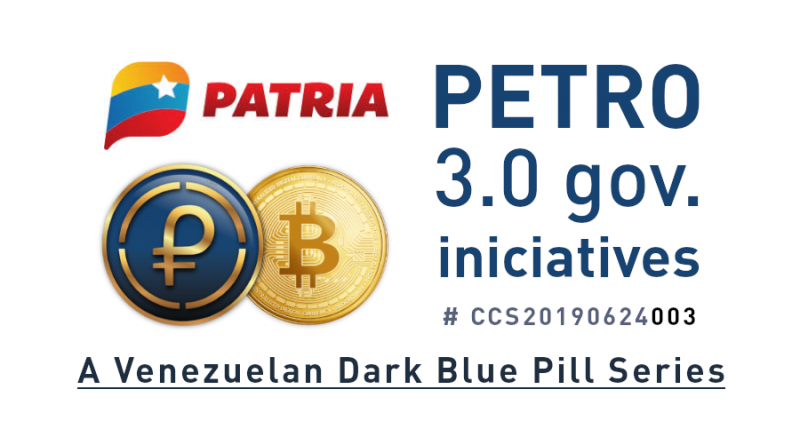 Venezuelan Dark Blue Pill #003
Since the Europeans invaded and colonized the “Americas” over 500 years ago, the native and all of those who came later, or brought here in chains, have been struggling to understand their true identity.

Amidst such uncertainties, Simón Bolivar triumphantly led 200 years ago a patriotic movement which delivered “political independence” from Spain. Nonetheless, greedy criollos y caudillos were effective at highlighting our few differences and minimizing our commonalities, making foes among fellow americanos, leaving us even more confused.

Since then, the imperial agenda of older and newer global players and the stupidity of our local elite perpetuated our mining-and-port-economy, forbidding an “economic independence” and denying our own heritage, industrial development, culture and identity.

In order to pay a long-and-past-due-identity-debt, the former president Hugo Chávez launched in 2004 a program called Misión Identidad, as a first step to visualize and recognize the poorest, the natives indígenas and the fellow Latin Americans who for years had been living underground within this land of grace, as Venezuelans.

After much political debate as to whether or not modernize our identity instrument named Cédula de Identidad, specially since other intrepid and agile governments have adopted state-of-the-art identity solutions, which have been successfully tested and used by the private sector for years, on December 18th 2016, current president Nicolás Maduro finally launched an additional identification document called Carnét de la Patria (homeland card).

For the following months, more than 18 million Venezuelans from all social classes and different political convictions lined up at the Bolivar Plazas across the nation to sign up to this new and highly controversial instrument. Although Venezuelans were not certain what such novelty would be used for, they did not want to miss out either. Eventually the following set of Web 3.0 applications were launched: veMONEDERO (wallet) veQR (QR reader), and vePATRIA (survey platform).

Little did we know that the PATRIA platform would be the most effective instrument for the government to understand the social needs of each household, and from which all governmental social-aid programs would be funneled through, due to its interactive nature.

Amid an unprecedented economic crisis, bolstered by an international financial blockade led by a depraved imperial power, president Maduro leveraged the PATRIA system to periodically distribute bonuses in order to alleviate some of the burden of his fellow citizens.

When the PETRO was finally launched on November 5th 2018 as a stable coin, given that its $60 price is anchored on a basket of Venezuelan commodities (petroleum, gold, iron and diamonds), its most natural feature, PETRO as a Savings Plan, was rightly use to promote its adoption since our national fiat currency, the Bolivar, has suffered a severe devaluation not seen anywhere in history.

Initially, the PETRO could only be acquired in person at the SUNACRIPheadquarters via a debit card. A few weeks later it was integrated and enabled for purchasing within the PATRIA platform by anyone who received a bonus.

Although empirical evidence makes me believe that most elderly nationals are not keen at using the PATRIA web platform by themselves, casual observation at the SUNACRIP headquarters suggests that, ironically, the Venezuelan elder believe, trust and use the PETRO as a Savings Plan the most.

PATRIA and PETRO are not the only initiatives that the Venezuelan government has done to construct a new social system with an economic model that puts all humans before and above corporate profits and personal interests. Nonetheless, most Venezuelans have suffered the inevitably painful cost of having been born in a country with the proven largest of oil reserve in the world, facing up a decaying and thirsty empire that cannot survive without fossil fuels.

The Bolivarian Government, admired by the humble and hated by the arrogant and ignorant alike, has been fiercely vilified by having the relentless commitment and the dignity to rescue our identify, ratify our sovereignty and complete the mission of our most visionary founding fathers: Francisco de Miranda, Simón Bolivar and his brilliant tutor Simón Rodríguez. This would be only possible with wisdom, effective management and by cleverly leveraging the latest technological innovations at hand; PATRIA and PETROare certainly on the right path.