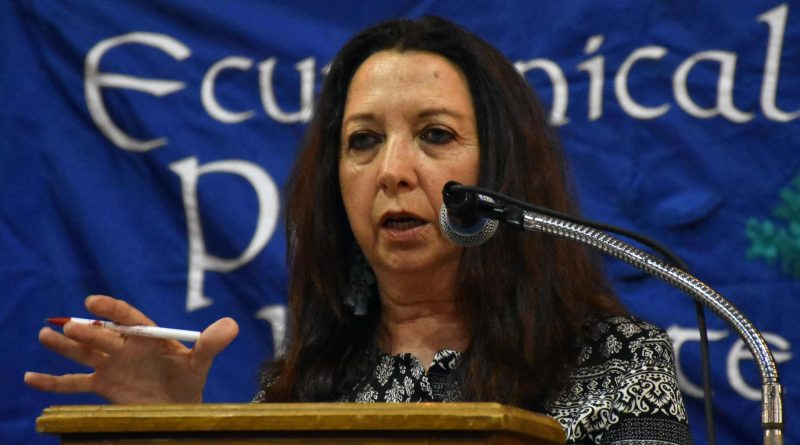 As we are gathering today, in my country Argentina, there is a very important presidential election taking place. If there is no fraud, it appears that the progressive formula of Alberto Fernandez for President and Cristina Fernandez for Vice-president have won.

This is a good sign and very close to my heart. I left Argentina in the seventies at the time of bloody military dictatorship in South America, I was one of the lucky ones that was able to survive to tell the story.

This election is one example of the push back against the imperial advances in Latin America, in virtually every country of the region that has subservient governments who have tied their cart to the neoliberal model there are major struggles breaking out; each one with their own social and historic characteristic.

In the case of Argentina, it is an electoral face-off with the people, who are burdened with a $45 billion dollar debt to the International Monetary Fund that generations of workers and poor will be obligated to pay off for generations, responding. While the form of resistance is different in each country the war is not that complicated when you think about it.

On one side you have the Political/ Military hegemony of Washington with the IMF, the multinational corporations with their scripted media, the local Oligarchies and the compliant Organization of American States with their puppet General Secretary Luis Almargo.

On the other side are the workers, the unions, the campesinos, the students, the impoverished, the retired trying to maintain their pensions and the Indigenous communities protecting to the death their lands against the voracious appetite of the Empire.

This formula is not new it has been going on for 200 years ever since the Monroe Doctrine of 1823 when the US declared that Latin America was its back yard and it would not tolerate competition there from European capitalist countries nor uprisings from the populations. This mindset from Washington of “the Americas are for the Americans” has not changed one bit and with the decline of the capitalist system they are acting with open and desperate impunity.

I am sure many of you remember that 20 years ago there was a progressive wave that was ushered into Latin America that brought hope to the poor. It was a time of integration among countries, with Hugo Chavez’s Bolivarian Revolution in Venezuela partnering with Fidel and socialist Cuba being the impetus, and it included others Nestor Kirchner in Argentina, Lula Da Silva in Brazil, Evo Morales in Bolivia, Rafael Correa in Ecuador and some others. There were progressive regional coalitions formed like CELAC, the Community of Latin American and Caribbean States, ALBA, Bolivarian Alliance for the Peoples of Our America and Mercosur were born. All of these were collaborative coalitions designed to develop regional cooperation that had mutual benefit based on respect and trust with the goal of raising the quality of life for all.

What made this all possible has to be traced back to the Cuban Revolution of 1959 when the US lost a prime colony that Washington has never forgotten or forgiven. This was a revolution that took a qualitative leap on April 16, 1961, after US planes had bombarded Havana, Fidel declared, “Because what the imperialists cannot forgive us for is that we are here”… “and that we have made a socialist revolution right under the very noses of the United States”.

Cuba’s human principles, vision and direction took hold in the entire region and it remains today despite the setbacks. Cuba chose to organize society in a different way, something the US could not tolerate. The loss of Cuba as a market was one thing but what was even worse was the example that it set for Latin America and the struggling colonies around the world.

Now we are seeing hopeful signs that the tide is turning again towards humanity and away from the system of profits before all else.

I hope you have heard about what is taking place now in Chile. While you could not find a word about it in the US corporate media, on Friday there were 1 million Chileans, out of a population of 18 million, in the streets calling for the resignation of the hated billionaire president Sebastian Pinera.

This comes after a week of severe repression from the military and the police who are a throwback from the time of the Pinochet dictatorship. Indigenous communities are now blocking the tin mines and a general strike continues. Ironically two weeks ago Chile was the darling of Wall Street and the model IMF nation.

This uprising was started by young students jumping the turnstiles of the subways because of a fare increase. It is a historical example about what a spark can bring. It was the straw that broke the camel’s back and now Chile is burning.

The US is speechless about Chile but meanwhile, in Bolivia the US is trying to target and undermine the legitimate first round of voting victory of Evo Morales by organizing and financing a campaign of violence and preparing a parallel government to Washington’s liking. The opposition refuses to recognize the triumph of Evo.

This is the same failed strategy they used in Venezuela, where in clean elections the people elected Nicolas Maduro as their president, and the US refused to accept it and picked self-proclaimed President, Juan Guaido that few Venezuelans knew until Washington discovered and promoted him.

I should mention that since 2006 when Evo arrived, Bolivia has the fastest-growing economy in South America that has allowed Bolivia to reduce poverty by 42 percent and extreme poverty by 60.

Similarly 2 weeks ago in Ecuador massive spontaneous demonstrations broke out when the President Lenin Moreno tried to eliminate fuel subsidies. Thousands of members of Indigenous communities marched from the countryside to Quito forcing him to back down. Moreno, once a progressive from the same tendency as former President Correa, has completely capitulated to the side of the imperialists including saddling the country with a $4.5 billion IMF debt.

I don’t have time here to go over each example but it is not too hard to understand the imperialists “Doctrine of Humanitarian Intervention”, and who are the targets of US imperialism.

The first set back started 2009 in Honduras, with the Obama Administration backed the ouster of progressive Manuel Zelaya a landowner who became President and then turned to the left. He went even further by first signing up Honduras for Petrocaribe, —an oil alliance of many Caribbean states with Venezuela to purchase oil on conditions of preferential payment—and then he supported the ALBA trade agreement.

The legacy of that coup is that today thousands of Hondurans are forced to immigrate north out of lack of fear and opportunity while thousands more protest regularly against the regime of the narco-dictator Juan Hernandez who stole the election in 2017.

This coup started a trend of conservative restoration throughout Latin America, followed by the parliamentary coups in Paraguay against Fernando Lugo, in Brazil against Dilma Rousseff, at the same time the lawfare—a judicial war—was triggered against progressive leaders like Brazil’s Lula da Silva, Argentina’s Cristina Fernandez de Kirchner and Ecuador’s Rafael Correa. In Brazil the right-wing managed with lies, the use of social media and corrupt lawyers to put Lula in jail, with no proof of wrongdoing preventing him from running again. Polls were showing that Lula would be elected with 65% of support. As a result far-right Jair Bolsonaro is now the president of that country, but people are resisting there too. In August Hundreds of thousands of Brazilians took to the streets of 211 cities to protest austerity cuts and privatization plans for the public university system.

The crime of the progressive wave of countries was to insist on controlling their own foreign policy and being able to trade and have close relations with countries of their own choosing.

So what is the current situation? We never put our hope in the US government or congress, but definitely Trump has gone beyond anything imaginable….

During his time in office, there was a State Department attempt to undermine the popular government of Nicaragua. But no other country has faced the intensity, of what can only be described as economic warfare quite like Cuba and Venezuela.

The Trump administration has been regularly and consistently tightening the six-decade-old embargo on Cuba in recent months with the stated purpose of cutting off income to Cuba and demanding it cuts ties with Venezuela. Washington has barred U.S cruise ships visiting Cuba, sanctioned oil tankers moving petroleum from Venezuela to Cuba and permitted lawsuits against foreign companies profiting from their use of properties confiscated from Americans or from Cubans who later obtained American citizenship right after the revolution.

Last week the US Commerce Department ended licenses to any country leasing planes to Cuba and just 2 days ago the State Department said that it would stop all flights from going to cities in Cuba sparing Havana.

I would be remiss in closing without mentioning the courageous struggle of the Haitian people who have been in the streets in perpetual protests for months against poverty and the corrupt government of Jovenel Moïse.

In understanding what is going on in Latin America it is important to follow the progressive independent news sources to stay informed about the behind the scenes operations the US and its allies are conducting to undermine and snuff out countries pursuing independent and co-operative directions. We can see that the real key is solidarity with those in motion in the street who have had enough.

They have had enough of the model of inequality and repression. They know it doesn’t work and they reject it and we should too.

Our role in the United States is to stand in solidarity with all the countries in Latin America that are fighting for their sovereignty.