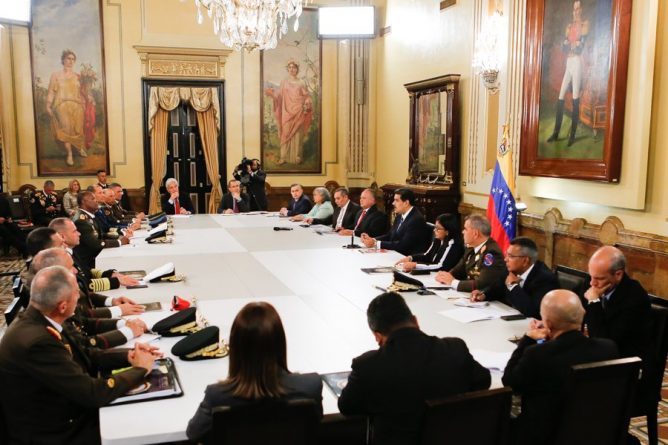 On Tuesday from Miraflores Palace, Venezuelan President Nicolas Maduro led a meeting of the Council of National Defense, which was installed in permanent session to discuss issues related to national stability. This special organ is defined by the Venezuelan Constitution according to Art 323.

The Council of Defense integrates the five Public Powers, the National Constituent Assembly and the Military Staff. “The National Defense Council has the task of evaluating the strengths of the State, the victories obtained and the tasks we have to consolidate the political stability of the country, social happiness and economic recovery,” said the head of state in a transmission on national radio and television network.

Maduro exhorted the meeting of the representatives of the Public Powers to redouble its efforts to move the country forward.

“I ask the Security and Defense Council of the Nation that as a State we promote a great process of change, renewal and deep rectification of all the Powers to improve everything, to improve the country!”, Said the president.

In this regard, the National Head of State indicated that the Defense and Security Council should work to develop a joint plan to promote the renewal plan. “Improve everything to improve the homeland. Fight corruption, bureaucratism, minimalism. Let’s be an example of an air of renewal, of good breezee of renewal to our people,” he said.

In this regard, he urged the Venezuelan people to support the measures that will be taken in the Defense and Security Council of the Nation for the stability of the country.

He added that it is an obligation to the country to fight against the evils that weaken the morality of society. “Improve everything for the country, fight corruption, bureaucracy in all instances (…) and give an example of fresh air to our people,” he said.

He also stressed the importance of remaining alert to the constant threats of the United States Government and its allies in Venezuela. “US imperialism every day seeks to harm Venezuela from outside and from within (…) The Venezuelan State must react in time with revolutionary strength and serenity in defense of our country, our Constitution and the right to peace”, he said.

In this regard, he urged the Venezuelan people and the authorities to remain vigilant and work for the defense of the nation, which for 20 years – with the arrival of the Bolivarian Revolution with commander Hugo Chávez – became the target of the imperial axes.

“It is a very special issue of this Defense and Security Council, it is an issue that we are taking as a priority to the talks and dialogues in Oslo, Norway, and all instances of political dialogue in the country,” the National President added.

On May 20, President Maduro proposed to the National Constituent Assembly early parliamentary elections. “I want elections, elections already (…) We are going to elections of the National Assembly to see who has the votes. We assume the challenge, we are going to look for a peaceful, democratic and electoral solution”, he said at that time.