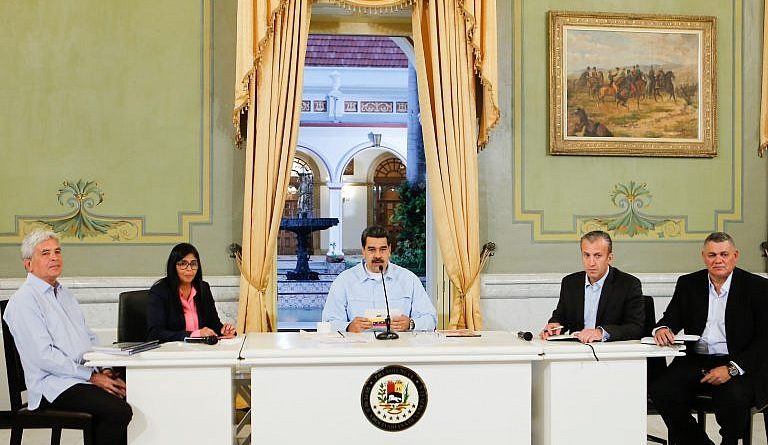 “Imperialist gentlemen: prepare for new defeats, because the CLAPs in Venezuela continue. They won’t stop it with a million unilateral measures!” This is how the President of Venezuela, Nicolás Maduro, responded to the coercive unilateral measures (misnamed “sanctions”) that the US Department of the Treasury announced Thursday against the Local Committees of Food and Production (CLAP), a program launched by Maduro’s government to deliver subsidized food to more than six million families every month.

The “sanctions” (which the Venezuelan government does not consider as such, claiming that no one has designated the US government as an entity with powers to judge and sanction other countries) involve the incorporation, in a list of the Office of Foreign Assets Control (OFAC), of 10 people and 13 entities in different countries.

The list includes Colombian businessman Alex Saab Morán and his children Isham Ali and Shadi Naím, along with other individuals from that country: Álvaro Pulido Vargas and Emmanuel Rubio. Walter, Yoswal and Yosser Gavidia Flores, children of Cilia Flores, wife of the Venezuelan President, as well as Mariana Staudinger and José Gregorio Vielma Mora, former governor of the Venezuelan state of Táchira, were also sanctioned.

The US government justifies the “sanctions” on the grounds that there is supposedly a “vast network of corruption” that, according to them, has allowed the administration of President Nicolás Maduro “to benefit significantly from the importation and distribution of food in Venezuela.”

However, on other occasions President Maduro has denounced the persecution and sanctions that the US government implements against foreign companies that sell products for CLAPs, including the freezing of funds and the rejection of transfers for payments, which has forced them to seek alternate ways to acquire food.

This Thursday, Maduro said that the new Trump administration measures “will not stop the distribution of food to the Venezuelan people”. From the Miraflores Palace, on a Productive Thursday, the national president indicated that “the food committees, the Carnet de la Patria and the Misiones y Grandes Misiones exist only in Venezuela, and we must continue working for the well-being of the people”. “Economic Terrorism”
On the other hand, the Venezuelan Ministry of Foreign Affairs issued a statement denouncing to the international community the repeated practice of economic terrorism by the US management to sanction the food program.

The text says that “the Trump Administration has blocked bank transactions, purchases of food and medicine, and has carried out countless actions in order to ignore the sovereign will of the Venezuelan people and force a change of government through non-constitutional means”.

RELATED CONTENT: US Evaluates Sanctions on Russia and Cuba for supporting Maduro

They also denounce “the perverse campaign of slander against the family of the Constitutional President, Nicolás Maduro Moros, in another unsuccessful attempt to affect the untouched morale of the Head of State”.

On the other hand, Alberto Ravell, director of the National Communications Center of Juan Guaidó, acknowledged this Friday in a tweet that “the sanctions to the CLAP program are the result of a joint effort between the US and the National Assembly”. You can read below the full statement:

The Government of the Bolivarian Republic of Venezuela denounces once again before the international community the repeated aggression of the government of the United States of America against the Venezuelan people, by announcing illegal unilateral coercive measures, whose criminal purpose, on this occasion, is no other that of depriving the Venezuelan people of their right to food.

The Trump Administration has blocked bank transactions, purchases of food and medicine, and has carried out countless actions in order to ignore the sovereign will of the Venezuelan people and force a change of government through non-constitutional channels. Such practices can only be described as economic terrorism and have the rejection of the international community, given the notable violation of the principles and purposes of the Charter of the United Nations and other norms of international law.

In an open demonstration of political and geopolitical despair and given the inability of the United States government to achieve its interfering objectives in Venezuela, the decisions announced today, add to the perverse campaign of slander against the family of the Constitutional President, Nicolás Maduro Moros, in another unsuccessful attempt to affect the untouched morale of the Head of State.

The Bolivarian Government of Venezuela, accompanied by the Venezuelan people, will not yield today, tomorrow, or ever, to blackmails of arrogant imperialist powers. On the contrary, it will face them with courage, dignity and democratic conviction, as it has always done, to assert his rights to freedom, self-determination and independence.