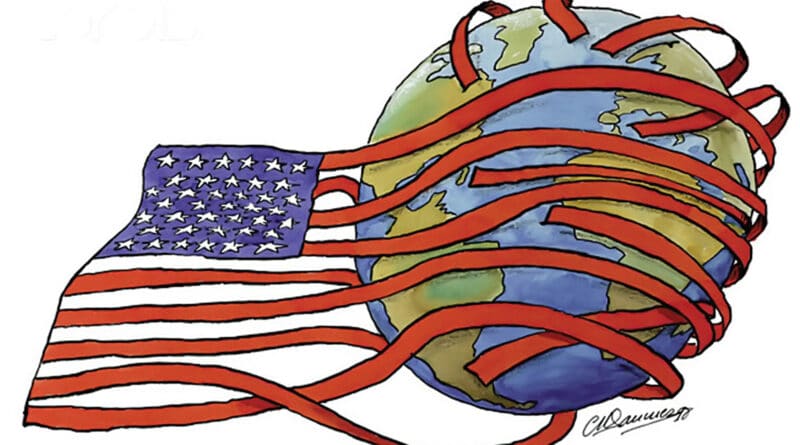 It would be regrettable if the people of the world did not take advantage of the new cracks that the COVID-19 pandemic has left not only in the capitalist system, and in imperialism—understood as its highest phase—but above all in the US empire.

For decades now, the US has been losing space and power in at least four strategic areas: economic, military, technological and energy, a situation that the hegemonic media has hidden but which the coronavirus has been making very visible and even accelerating. We have been writing about this issue and its details in recent months, but it is worth repeating as many times as necessary that the US is in a precarious economic situation with an unpayable debt, with gold reserves that do not even cover 2 percent of that debt, with a trade balance in deficit since the 1970s and increasingly dependent on China, and with a currency, the dollar, that has not ceased to lose value.

This situation has unleashed a global reordering and a confrontation between powers—we’re referring to the US and China—in which the northern country finds itself at a clear disadvantage and losing more and more space, power and hegemony. China is moving forward with its new Silk Road Economic Belt Initiative, which is not just a trade project, but has great implications. It is a proposal that has monetary and financial aspects, constituting a threat to one of the main muscles that imperialism and the US empire have used to dominate and extort the people of the world.

Since the end of World War II, the US has had at least two great powers: military (NATO being its main instrument) and monetary power, which in turn has had two very powerful instruments: 1) the dollar, due to an imperial agreement at Breton Woods through which it was granted the exclusive right of functioning as the world reference currency, later in 1973, by detaching it from the gold standard, basing it on the “confidence” of the US economy and turning it into the only currency with which one could buy oil. 2) The monopoly of the world payment system, the SWIFT, which is nothing more than a great world-wide “caper” through which literally everyone has to pass every time they want to carry out a financial transaction and whose decisions are watched over by the owners of the US Federal Reserve.

This global re-ordering that COVID-19 has been accelerating, and which implies the increasing loss of military and economic hegemony of the US empire, will not necessarily translate into an automatic change of the mode of production based on the exploitation of the worker, much less into the immediate end of the capitalist system, even though the pandemic has also revealed the crisis and failure of this system. However, this loss of space, power and hegemony of the US empire is a great opportunity for the people who decide to move towards a system of equality, justice and humanity to do so without so many obstacles-upon-obstacles imposed by the US.

Since Truman in 1947 established his Doctrine of Containment of Communism, which was added to the Iron Curtain that Winston Churchill brought down on Europe in 1946, we have observed how every time that the people have initiated socialist revolutions, the US government, in the framework of total and unconventional wars, have sought to impose and contain them through financial blockades, made possible by the fact that they have a monopoly on the world’s financial seizure with SWIFT. We have also observed how they have attacked the people by attacking their currencies in an attempt to break them by hunger, which has been possible for the gringo empire because of the power granted to it at Bretton Woods, which was later strengthened in 1973 by Nixon and Kissinger when they eliminated the gold standard and created fiat currencies and petrodollars.

The reordering of the world and the move towards multilateralism and a monetary system that does not depend exclusively on the dollar, and does not have a single clearing-system for payments, represents not only a loss of US power but also a golden opportunity for revolutionary movements seeking to move towards a just and humane system. This opportunity should be seized to gain time and space and consolidate an alternate egalitarian and humane system, to showcase its achievements in order to undermine the foundations that still sustain this exploitative mode of production that creates inequality, poverty, hunger and misery.

RELATED CONTENT: China Announces Sanctions Against Mike Pompeo and Other US Nationals

In this context, we propose some tasks in the framework of the post-pandemic anti-imperialist agenda. These tasks aim at the strategic objective of joining the acceleration of the reordering of a world that is multipolar and multicentric, and that implies the loss of US hegemony and therefore its power to contain socialist revolutions. To this end we consider it necessary:

To expose, in every corner of the planet, the precarious economic, commercial, monetary, financial, technological, military, and cultural situation of the USA.

To amplify with giant magnifying glasses what has already been made visible in a pandemic: the failure of the capitalist system to respond to the needs of the people, which is not only limited to the provision of health services but also to its capacity to generate inequalities, poverty, and hunger in the world.

To unmask the economic weapons that the US empire has used to subdue the peoples. And on this point, the proposal is not only to denounce the economic and financial blockade or the attack on currencies. It is necessary to denounce the structures and tools that give it the power to blockade and manipulate currencies. We propose to campaign against the monetary system based on a single global reference currency, in this case, the dollar, as well as campaigns against the global financial system based exclusively on SWIFT.

Related to the previous point, to promote world economic reorganization based on new trade rules not imposed by the USA, based on a monetary system in which many currencies serve as a reference so as not to give power to any one nation and not to make the same mistake of Breton Woods, and based on a financial system with infinite systems of payment compensation to avoid financial monopolies in the world.

Faced with the empire and imperialism’s strategy of depoliticizing peoples through depolarization—a phenomenon that we have been observing in Our America under the cloak of a discourse of “Unity”—we call for the strengthening and deepening of class consciousness and the organization and mobilization of the people.

Let us seize the opportunity provided by the decline of the US empire to move towards socialism. There is no time to lose, especially since, in the meantime, big capital, in a wave of reinvention, is drawing new lines on the playing field.