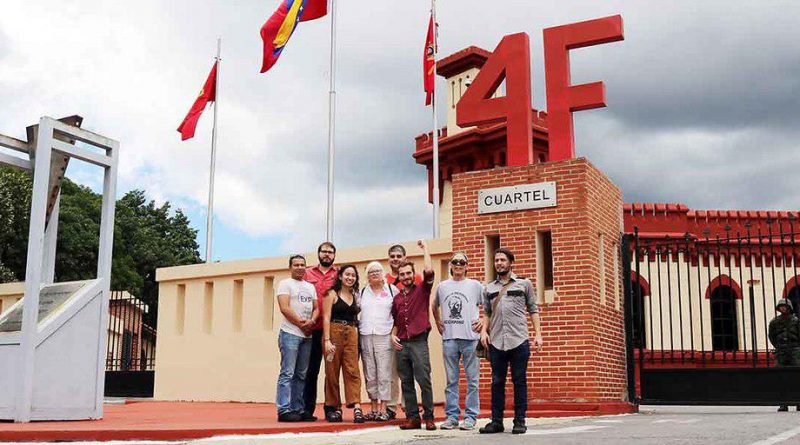 The Collective of Protection of the Embassy of Venezuela in Washington visited on Tuesday the Mountain Barracks in Caracas, where the mortal remains of commander Hugo Chávez rest. During this tour the members of the Collective had an approach to the historical legacy of the Commander.

It should be noted that this tour was attended by the Vice Minister for North America of the Ministry of Popular Power for Foreign Affairs, Carlos Ron. In addition to the Collective, a delegation of the Nationalist Party of Puerto Rico Liberating Movement also attended.

RELATED CONTENT: US Activists Fought for Respect of International Law

For his part, Wyatt Reed, a member of the Collective said that “my visit to the Mountain Barracks is something that I will never forget, because what Chavez did for the Venezuelan people cannot be lost, nor can those achievements of the Bolivarian Revolution be lost”.

Reed commented that since his arrival in Caracas, he has known a completely different Venezuela than the one shown by the Western media.

He also said that he has been with the Venezuelans of the popular sectors of Caracas, thus being able to verify the dignity of the people, this in contrast to the Venezuelan opposition that violently besieged the Embassy in Washington, whom he described as fascists.

Also, Jordan Wall, a member of the Party of Socialism and Liberation and organizer of Answer Coalition, said that his visit to this country has inspired him a lot, because he has been able to see how the people face economic warfare. “I have enjoyed being with the people of Venezuela, I want to return to my city and tell my colleagues about the struggle that is taking place here, because they are the same forces that oppress us there and at the same time cause so much damage to the Venezuelan people”.

On behalf of Code Pink, the first organization to defend the Venezuelan Embassy in Washington, Patricia “Paki” Weland said that “I went to the Embassy at the invitation of the Venezuelan people and government to protect it, this was an opportunity to show Venezuela our solidarity and to defend and maintain international law. We were there to tell the United States government: ‘Hands off Venezuela”‘.

Finally, Weland expressed his impressions on this tour of the Mountain Barracks. “I loved hearing the story of the life of Commander Chavez, he is certainly a great hero and leader of the 21st century”.