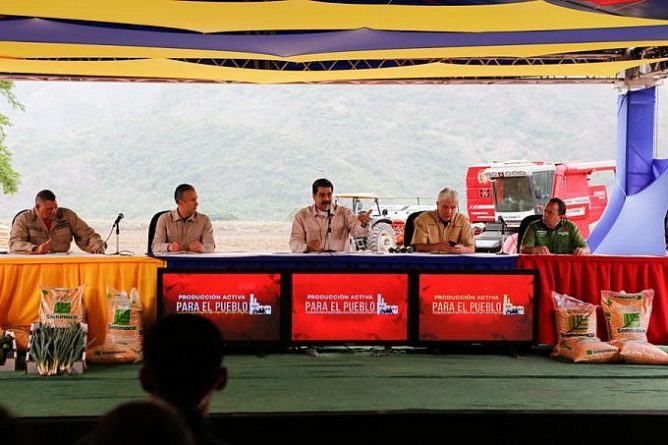 On May 11 and 12, community assemblies will be held throughout the country, in order to create a plan for renewal and rectification of the national government, the President of the Bolivarian Republic of Venezuela, Nicolás Maduro, said on Wednesday. “It is time for a great rectification of the Bolivarian Revolution, it is time for a great dialogue and action for our people. The strength of the revolution must be achieved by overcoming errors,” said the President during his visit to the Agricultural Production Unit “Gran Cacique Yare”, located in the La Placera sector, Girardot municipality, of Aragua state.

“I started a process of dialogue with the people to make a Plan for Renewal, Rectification and Change within the Bolivarian Revolution. This weekend the days should go to the communities. Let’s listen and attend to the people”, he said.

He urged the entire executive cabinet to listen to the demands of the people to rectify the management of the country. “There are many things pending to rectify and improve in the country. It is time for a great rectification of the Bolivarian Revolution.” And he added “(I want) to hear the people, their proposals, claims for rectification in the community,” he said.

In this line, the President ordered the United Socialist Party of Venezuela (PSUV), the leadership of the Bolivarian Congress of Peoples, governors and mayors throughout the country to organize days in each community, to listen to criticism and proposals of the Venezuelan people.

The Head of State explained that the great strength of the Revolution is the constant renewal of ideas that comes from popular power. “The people know what should be done,” he said. He also acknowledged that the Revolution has remained firm because “on the one hand, civilians and military are defending the homeland and on the other side we are sowing, renewing, to open the way to a prosperous stage for the Nation”.

Maduro also highlighted the democratic attitude of the Revolution over the course of these 20 years, in which it has triumphed in 23 of the 25 elections in the country. “We have a renewed and legitimate leadership,” he said. In cases where it has occurred, “we have recognized our defeats,” he said. On the other hand, the opposition, when they were not favored in elections, has taken the road of sabotage.

It is worth remembering that the Head of State initiated a plan of action, renewal, rectification and change in the structure of the country, to recover the productive areas of the nation, “an intense, aggressive plan of all the political, social and economic life of the country, of the Bolivarian Government,” he said. These days have been held since May 4 and ideas are heard, criticisms and successes that the Venezuelan people believe should be raised with the Government led by President Nicolás Maduro.

“Another world is born of the battle that Venezuela is waging,” the Venezuelan president assured, since the ideas of popular power are what have maintained this democracy for 20 years.

“We have the most just cause that has existed in Venezuela, the cause of Bolivar, of Chavez, we are on the right side of history,” he said.