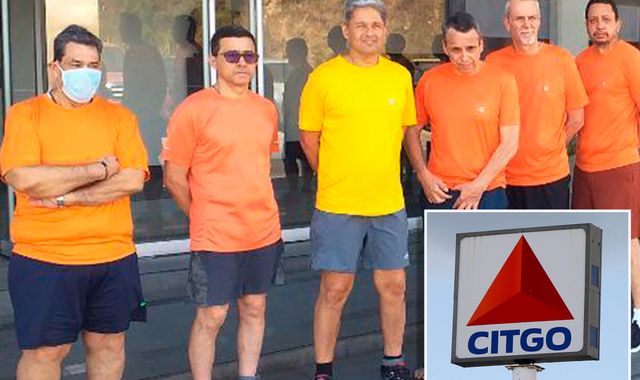 According to information released by controversial AP journalist, Joshua Goodman, the Venezuelan justice has granted an alternative measure of deprivation of liberty to the six Venezuelan former CITGO executives who are imprisoned for being involved in crimes of corruption.

Through a message on his Twitter account, Goodman noted: “Venezuela has just released from jail and gave house arrest to six US oil executives jailed in 2017 on corruption charges. Seems to be a show of goodwill towards Joe Biden as he reviews the sanctions-heavy policy he inherited from the Trump administration.” The journalist forgets to mention that former executives are Venezuelan citizens, born and raised in Venezuela, who happened to acquire US citizenship due to their naturalization while working for the Venezuelan government at CITGO in the US.

The former executives had been granted house arrest in December 2019, but were moved back to prison at the headquarters of the Venezuelan intelligence agency SEBIN just months later, in February 2020, hours after President Donald Trump met with Venezuelan former deputy Juan Guaidó, and under suspicion of an escape attempt.

NEW: Venezuela has just released from jail and gave house arrest to six U.S. oil executives jailed in 2017 on corruption charges. Seems to be a show of goodwill toward @JoeBiden as he reviews the sanctions-heavy policy it inherited from the Trump administration @AP story upcoming

These six men were convicted of the crimes of embezzlement of funds and criminal association with a contractor.

At that time, the prosecutor Tarek William Saab explained that they “requested loans of up to $4 billion under unfavorable conditions for the Venezuelan oil industry and without any discretion, meaning, behind the back of the President of the Republic, Nicolás Maduro, offering CITGO assets as a guarantee against the loans.”

We are relieved to hear that Tomeu Vadell, Alirio Zambrano, Jose Luis Zambrano, Gustavo Cárdenas, Jorge Toledo and Jose Pereira, known as the CITGO-6, have been released from prison and granted house arrest in Venezuela. (1/3)

He also detailed that “the board of directors exposed the PDVSA subsidiary to a possible criminal liability for breach of the different contracts signed.”

It is worth noting that five of these six former executives have US citizenship due to naturalization though they are all Venezuelan by birth, and the other is a Venezuelan citizen with legal US residence, so during Donald Trump’s administration, Venezuelan government was pressured to release them.

My team @RichardsonCNTR and I have been working tirelessly on behalf of the families, and will continue to do so until all six men are back home with their families, along with Luke Denman, Airan Berry and Matthew Heath, who remain imprisoned in Venezuela. (3/3)

US politician and former governor of New Mexico, Bill Richardson, expressed his satisfaction last December when the six former executives of CITGO received house arrest benefits for the first time. This time also, he posted a celebratory tweet as they received the benefit again.

Many analysts in the United States have criticized that while Trump prioritized the release of these non-US-born oil executives clearly involved in a corruption scheme, he did not pay much attention to US-born citizens in prison in Venezuela for their notorious and evident involvement in espionage and terrorist plots, like Luke Denman and Airan Berry who were protagonists of Operation Gideón, and Matthew Heath, captured near an oil refinery with explosives and accused of espionage for the CIA.

In his tweets today, Richardson also referred to these three US citizens accused of terrorism and espionage in Venezuela. “My team @RichardsonCNTR and I have been working tirelessly on behalf of the families, and will continue to do so until all six men are back home with their families, along with Luke Denman, Airan Berry and Matthew Heath, who remain imprisoned in Venezuela,” he wrote.