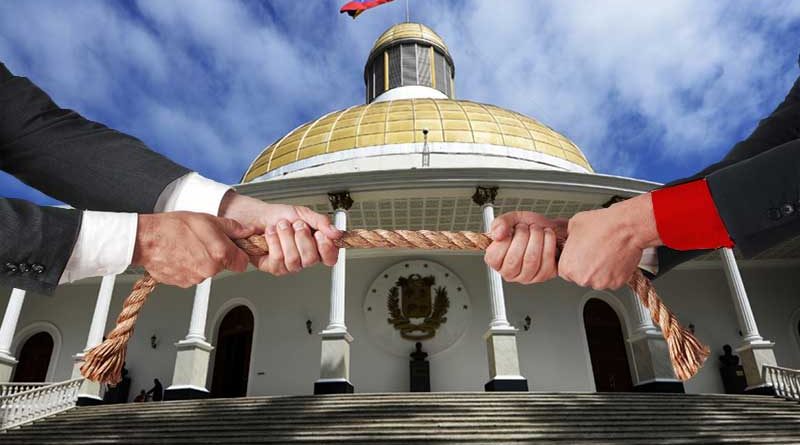 Returning to the National Assembly (AN) is a net concession of Chavismo in the Dialogue Table, a step to recognize the only public authority that is controlled by the opposition. The Chavismo does not expect with this return to have a majority in the national parliament, because the numbers for that are not there.

But the small migration of votes in the House could take away any possibility that the opposition will make decisions that require the support of two thirds of the deputies. That could pave the way towards the lifting of the state of contempt that vitiates currently all decisions of the AN.

The return of Chavismo does not mean that the government recognizes the legitimacy of the AN’s actions as long as it remains in that situation of contempt in which it was declared for repeatedly breaching the Supreme Court’s rulings.

These are the preliminary conclusions that can be drawn, around the issue of the AN, of the agreement signed by a group of opposition parties with the government forces, and of the reactions that this beginning of political understanding has generated so far.

The status quo is maintained
The pro-governmental forces cannot obtain control of the AN just for the fact of returning to it (as some critics argue), since the non-signatory opposition continues to have a large majority and have already rushed to declare that they do not consider the pact valid.

One of the decisions they could not take, due to lack of sufficient votes, is to prevent Juan Guaidó from being ratified in office in January 2020 for another year. They will not get those votes unless there is a rupture within the non-signatory opposition of the pact and one of the other three parties of the so-called G-4 (Democratic Action, Justice First and A New Time) decides distance themselves from Popular Will.

In fact, ahead of any play in that regard, the first reaction of the non-signatory opponents after the scramble generated by the signing of the agreement, was to ratify Guaidó as president of the AN and “as president in charge of the Republic until the end of the usurpation”. The annual period of the parliamentary authorities ends on January 5, 2020, so extemporaneous ratification can only be considered as an attempt to rush the decision.

The G-4 parties added to the agreement of the Yellow House do not count, not even distantly, on enough votes to affect the current balance of forces with respect to simple majorities (half plus one of the votes) of the AN. Certainly they are very small with respect to the correlation out of the December 2015, when the last parliamentary elections were held.

Another would be the picture if you compare numbers with the results of the presidential elections of May 2018, since the parties that make a majority in the AN (those of the former MUD) opted for abstention, while the signatories of the agreement obtained, together, more than three million votes (out of 10 million votes).

The journalist and electoral expert Eugenio Martínez said on his Twitter account that the parties that signed the agreement of the Yellow House, which he describes as “opposition dissidents,” bring together only 9 of the 112 deputies, elected with the card the Bureau of the Democratic Unit in 2015. He also warns that of those 9 deputies, two have rejected the agreement. That means, only seven votes would change sides in a possible vote.

Now, the loss of those seven seats would place the total of the non-signatory opposition at 105 votes, a notable simple majority, but not enough for decisions requiring a two-thirds majority.

At a defining moment, other factors should also be put on the table, such as the dissent within Chavismo and the absence of numerous opposition deputies who are subject to judicial proceedings, outside the country or asylum seekers in embassies. All of them have substitutes, but it would be necessary to see what the position of these people is at present and about the cases that would eventually be decided.

Epicenter of the conflict
This is not a minor detail. The question of a two thirds majority has been the epicenter of the conflict between the Executive and the AN controlled by the opposition since it was installed in January 2016, and its then president, the Democratic Action politician Henry Ramos Allup, promised that in six months they would have removed Nicolás Maduro out of power.

The legal actions against the electoral result of Amazonas State stoked the fire of this controversy and added to the permanent tests of strength between Executive and Legislative branch regarding laws and appointments of officials. Those controversies were resolved by the Judiciary. The refusal of the AN to comply with the decisions of the Constitutional Chamber of the Supreme Court of Justice caused it to be declared contempt just in its second year of the five year term.

Substantially improving the result will be a challenge for the United Socialist Party of Venezuela (PSUV), which suffered the worst of its historical defeats in 2015. But the task for anti-Chavismo is not simple either. That great victory was achieved because, for the first time in years, they managed to unify their electoral offer with the MUD card (the famous little hand), but four years and more of errors, omissions, disagreements, appeals to violent outings, invocations to external forces and another long string of questionable behaviors makes the opponents’ work an uphill undertaking.

It will be in this environment of complicated electoral campaign in which the already agonizing AN will have to resume the role that it has not been able to fulfill in the previous years, now with the Chavismo incorporated, according to the letter of the agreements.