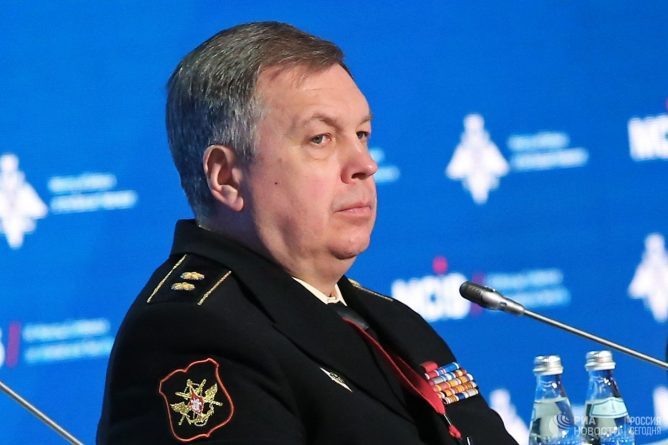 The United States intends to carry out a “change of power” in Venezuela by force using “the hands of Colombia,” said the deputy head of the Central Intelligence Department of Russia (GRU). in Russian), Vice Admiral Igor Kostiukov .

“The subversive activities of the US continue against the Bolivarian Republic. Several options are being carried out to change the Chavista government, ranging from the creation of conditions for an increase in the feeling of dissatisfaction in the population and its subsequent transformation into a social explosion, going to the implementation of force scenarios against Caracas. ” Kostiukov said Thursday during his speech at the 8th Moscow Conference on International Security.

Washington wants to organize an invasion of Venezuelan territory “with the hands of its allies, mainly Colombia,” he added.

RELATED CONTENT: “We Have Means to Trick it”: Russia Warns the US on Anti-Missile System

According to Kostiukov, currently illegal armed groups are being formed by Venezuelan deserters, members of criminal organizations of Central American countries and Colombian rebel groups, which are already operating to sabotage the infrastructure of the Bolivarian nation.

However, to the USA “it does not matter” that the first victim to suffer the consequences of their actions is the civilian population, whose interests Washington allegedly claims to defend, added the deputy head of the GRU.

Earlier, US President Donald Trump said that the military intervention in Venezuela is an “option” to resolve the situation facing the South American nation.

In addition, he indicated that the North American country spends annually 1,500 million dollars in the “intensification of its influence” in Latin America. In this regard, he said Washington’s “American-centric foreign policy” in the Western Hemisphere is the “main threat” to security in the Latin American region. “The results of such destabilizing activities are in view in Afghanistan, Iraq, Syria and Libya,” the vice admiral added.

“Washington is practically ready to declare the Venezuelan government ‘sponsor of international terrorism’, on this pretext, resort to force and sanctions against Caracas,” said Igor Kostiukov.

On the other hand, the deputy head of the GRU warned that the “color revolution” that the US is  implementing in the Bolivarian Republic, could be applied in “the near future” also in Nicaragua and Cuba.

For its part, the spokeswoman of the Ministry of Foreign Affairs of Russia, Maria Zakharova, declared on Thursday that the US continues to increase the likelihood of the use of force in Venezuela, despite the fact that the “overwhelming majority” of countries “clearly oppose” an armed intervention in this Latin American country.