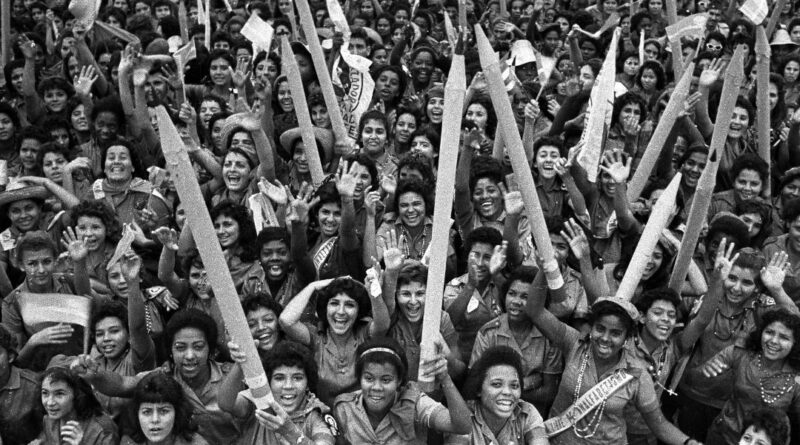 US documentary film director Catherine Murphy’s new film project Silvio Rodríguez: My First Calling, is based on the great Cuban singer-songwriter where he explains in moving detail his experience as a young teacher in the 1961 literacy campaign. The film premiered this past Sunday and was followed by a tribute concert, produced by HotHouse Global, of his songs performed by a number of international artists including Lila Downs, Kelvis Ochoa and Quetzal, and many others.

If you add to the music, the poetry and the commitment his will, those qualities make Silvio Rodriguez more than an artist of solidarity but a human being of great integrity. This can be seen in the 30-minute documentary which weaves together archive images of the Literacy Campaign with Murphy’s exclusive interview with the iconic Cuban troubadour and artist that reveals his contribution to the, monumental effort that took place soon after the revolution.

Silvio tells how at age 14 he volunteered to be part of the brigade with more than 100,000 urban teenagers who went out to the mountains and the countryside to teach the island’s farmers to read and write. In his direct and humble way, Silvio shares his memories of how this experience impacted him and shaped his life, declaring: “For the first time in my life I left my family and assumed a social cause as an active member of society. The author of “Ojalá” admits: “Maybe this first adventure is what put me on the path of adventure and the social consciousness that defines me as a man”.

Catherine Murphy is the founder and director of The Literacy Project, a non-profit organization, born in 2005. It is a documentary oral history project that collects personal testimonies about literacy. “Our work elevates the stories of those who teach literacy or are struggling with literacy,” Murphy says. The Literacy Project operates on the belief that literacy is a fundamental issue of social justice and human rights, essential for a healthy and dignified society and a fully functioning democracy. Of particular concern is the intersection of race and gender in relation to literacy. Through various media and documentation methodologies, an archive of personal stories related to literacy and social justice movements throughout the Americas is being created. The Literacy Project’s documentaries include, in addition to the one on Silvio are: They Say I’m Your Teacher (2019); Maestra (2012), Crusade (in production), and Paulo Freire’s Lxs Hijxs (in development).

RELATED CONTENT: Silvio Rodriguez Finally Responds to Ruben Blades: “You Think They Have Two Presidents, I Only See One”

The filmmaker carried out a project on the historical memory of the 1961 Literacy Campaign in Cuba, through a collection of testimonies from the island’s citizens, who were among the youngest literacy educators. She spent part of her studies in Havana in the 1990s and met several Cuban women. “I met them because of their activities in their country. They do interesting work in various fields. They repeated several times that, in addition to everything they have done in their lives, they feel that the greatest human contribution was to have become literate as teenagers. This aroused my curiosity. I began to conduct interviews with these same Cuban women and their testimonies were really spectacular. Through them I learned about the macro phenomenon that is almost impossible to believe and that seems to be fiction. It’s like I fell in love or became obsessed with continuing to record these testimonies,” says the director.

One of the photographers on Murphy’s filmmaking team was Roberto Chile, a leading Cuban documentary filmmaker. “He and others knew that one of the literacy workers was Silvio Rodriguez. We requested the interview and Silvio generously granted it. It’s more like a recorded testimony than an interview. It is his memories, his testimony of his experiences as a literacy worker and the meaning that this had throughout his life in his development as a human being, as a creator,” the director explains about the documentary.

“There are many people in the world who love Silvio, his work, the person that he is, artist and citizen artist, poet, voice of the Latin American conscience but few people know of that moment in his life, that he was an alphabetizer at a very young age. That is not very well known. He speaks in such an emotional, poetic way and says that this experience marked him for his life and that, perhaps, it was like the beginning, that he was born there as a social being. He remembers that it was the first time he left his home, that he was able to face the world (“pure and hard”, he says), to start to stand on his own two feet. He explains that, maybe that’s where his love of adventure was born and his subsequent journey when he left on the boat Playa Giron for six months. That’s where he fell in love with those actions: helping, and serving,” Murphy says of Silvio’s little-known story.

The troubadour also has several anthological phrases that he expresses in the documentary. One of the most significant is: “Possibly, we teachers learned more than the students”. For Murphy “that’s very nice, very poetic and very true”. And he argues it like this: They taught elementary things, but Silvio says in his interview that they all learned more than they were able to teach. The young literacy educators taught many of their students to write their first and last names, to sign. Many of the illiterate peasants had signed with their thumb or with an “x” for such elementary things as land titles, or anything else. The young literacy workers taught them to apply their names, to sign, to know the alphabet and basic words. Silvio says that, in one of the classes, those who were illiterate did not know that the Earth is round.

The singer-songwriter describes the experience as very beautiful but at the same time very dramatic. The director explains the meaning of that phrase: “Silvio was located in an area of southern Cuba, which is the Ciénaga de Zapata. It’s a very wild place, where people used to hunt -and still do- by boat. People cut the stems from the trees and cook them so they can be used for firewood. There, people lived on the edge of permanent survival. Silvio had two locations as a teacher and one was there. The first location was near Playa Giron, on the outskirts of Cienfuegos. And he was teaching literacy in a community, where the people who lived there were the first to collide with the invading troops of Playa Giron. “These people were still very traumatized by the loss of family and friends and by the whole experience of the invasion. That’s very strong and dramatic. He was there for a while. Then he was placed in the Ciénaga de Zapata, in a community where he lived and taught literacy to people whose primary work is making charcoal.” So, there were many beautiful aspects that he mentions, but life there was very dramatic,” Murphy emphasizes.

In that experience, the teenager Silvio Rodriguez let himself be guided more by intuition than by knowledge. This is how he describes how being a literacy teacher at the age of 14 in 1961 was his first of many adventures that went on to joining a commercial fishing boat between 1969 and 1970, to volunteering in the war in Angola in 1977, in addition to a five-decade professional career promoting protest, love, patriotism and social responsibility through song.

“I don’t want to speak on behalf of anyone, least of all Silvio, or take his positions, but the collective voice that remained with me from so many people that I talked to, recorded and interviewed, is that it was a profoundly transformative moment. All those who speak that way believe that it was the moment they learned about life, their country, the world and themselves,” says the filmmaker. “In some way, many really fell in love with some fundamental aspect of what teaching, education, pedagogy is, but beyond that, like service, the beauty of truly serving another human being, giving of oneself to others and for collective advancement, because it’s not that charity thing. I think it also has to do with the fact that the whole campaign was conceptualized as a horizontal alliance between those who had the opportunity to study and those who did not. And they united in an emancipatory alliance for a collective feat and for a country, for an improvement of a national problem, a collective problem. It was a collective solution too, and everyone says that participating in it was deeply transformative in the personal and collective sense too,” adds Murphy.

The Hot House Cultural Center, in Chicago, was founded in 1987 and has since become a cultural reference point for the performing arts, mainly international music “with a social justice and activism edge,” says Murphy. “It has to do with the protest song, the new song, and the artists coming out of Cuba. They invited me to present Silvio’s documentary and it’s a great pleasure for me to work with them. They came up with the idea of launching it with a concert; that is, Silvio’s testimony in literacy, which is almost 26 minutes, followed by an hour of music with performers and heirs to Silvio’s work. Each one interprets a theme of Silvio’s from their own selection”, concludes the director of the documentary that can be seen for free, as well as the concert.

The Literacy Campaign that Cuba launched in 1961 was a worldwide example. “I really see it as a watershed moment in the social history of the Americas,” Murphy believes.

“And I think it’s a lesson for all nations and societies because illiteracy is still a major global problem in developing countries but also in countries like the United States, which has a functional illiteracy rate of one in five. One in five people do not read or write well. And it is a rather invisible problem. We are surrounded all the time by people who do not know how to read and write well, who are illiterate, semi-literate, functionally illiterate. Planet Earth is surrounded by the evil of illiteracy all the time and if it doesn’t touch you directly you probably won’t see it,” denounces the director of The Literacy Project.

“Illiteracy is a factor that causes, but also results from, social exclusion and marginalization. It is a national problem, we are going to overcome, we can overcome it, each citizen has a way to contribute and it is not an individual problem of those who suffer it but a problem for all of us. Those who have studied and those who have not, need to unite to overcome a national problem. That continues to be something wonderful and incredible, of which it does not matter what people think of Cuba. It is a model for the world and proves that it is possible,” Murphy concludes.

To watch the trailer go to: