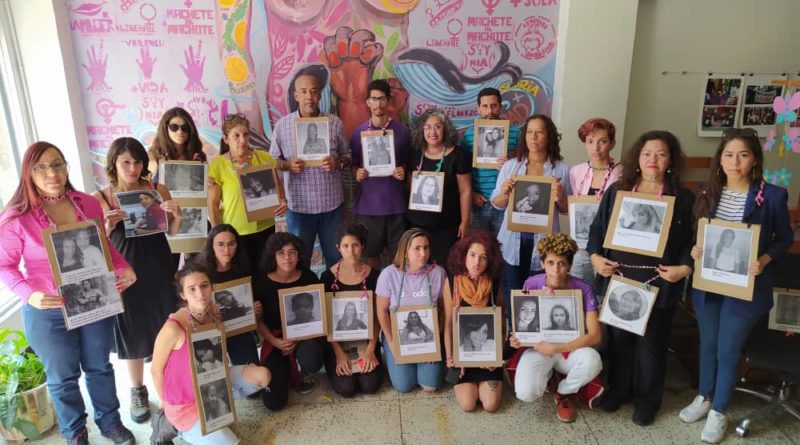 This Wednesday, January 29, from the headquarters of the Violent Ink group in Caracas, feminist and social movements and individuals denounced the increase in femicides and weaknesses in the justice system on this issue. During this meeting, Daniella Inojosa, belonging to the La Araña Feminista and Tinta Violeta Collective Network, emphasized that the Venezuelan State must declare a Feminist emergency in the country and in this regard approve a special budget to address cases of sexist violence.

Femicide, revictimization and “flipping” figures
According to the Organic Law for the Right of Women to a life free of Violence, in Venezuelan society, sexist violence is expressed at different levels: symbolic, psychological, labor, heritage and physical, to name a few cases. The greatest example of this type of violence is femicide, that is, the systematic killing of women for simply being women.

After justice was achieved for the femicide of the dancer and militant Mayell Hernández, which occurred on September 3, 2018, thanks to the social pressure of the feminist movements, the Public Ministry reported that between August 2017 and September 2018, 93 cases were received, 63 of them femicides consummated and 30 frustrated.

However, part of the denunciations of feminists, relatives of victims and individuals consists in the constant updating of these figures, from 2015 to this year, for the execution of relevant public policies and the proper attention of cases. According to a research carried out by Utopix , with a femicide monitor headed by the feminist Aimeé Zambrano, from January to December 2019, 171 young women, adults and girls were murdered because of their gender, [a number] recorded by collecting news and reports in digital media from all over the Venezuelan territory.

This 2020, this research indicates that to date 25 femicides have occurred in Venezuela. “In relation to January, we saw that December ended with extremely high figures, in which the measure of that report showed a woman murdered every two days. According to the monitor, the average is almost a dead woman per day, ” said Aimé Zambrano, while calling on the feminist and revolutionary women’s movements to go out and continue the fight.

On the other hand, as regards the different cases of sexist violence in the country, Isabel Gómez, a young militant of Tinta Violenta y Calistenia Cultural, highlighted the revictimization of the women who file the complaints, as well as “passing the buck” by officials of the justice system in processing these cases.

“There are failures in the judicial process of gender violence regarding the reception of complaints. Through the “Loving Attention Volunteering for Women Victims of Violence Mayell Hérnandez”, launched by Tinta Violeta, we have known cases of women where several officials and civil servants do not let them file complaints, do not receive their complaints first hand, revictimize them and persuade them not to accuse, claiming that their partners are in love with them and their family or marriage must be saved,” said Isabel Gomez.

In addition to this situation within the bodies of justices, the Venezuelan feminist and popular movement said that the operation of shelter houses for the care of women victims of violence is currently scarce. This is a policy, established in the Law, which must be carried out by the Ministry for Women and Gender Equality through the National Women’s Institute (Inamujer).

The popular feminist movement demands and also proposes
Other demands by the revolutionary feminists are based on the promotion of anti-patriarchy public policies, above all, given the increase in femicides and sexist violence, which have intensified with the blockade and the economic crisis.

“Measures must be taken by the State where social movements are called to the transformation of the system. That is why we demand the de- localization of the legal and legislative system, where we mainly demand official figures, authorization of shelter houses and elimination of special dress codes for access to the institutions receiving complaints”, said Niedlinger Briceño, journalist and member of the Weaving Women Collective. As part of the undoing of patriarchy and the special budget of feminist emergency, they propose the transformation of the educational system, public and private, with sexual education of children and adolescents, with regard to the 8,966 cases of crimes of sexual abuse against minors and youth in the last two years, announced by the Public Ministry.

In this sense, this Wednesday, January 29, in Caracas, feminist, popular and individual movements affirmed that violence against children, young women and adults are of the utmost importance and threaten society, so they said they will continue in assembly and on the streets, in preparation for the to March 8, International Day of Working Women.

You can read the original press release (in Spanish) clicking the source URL link.