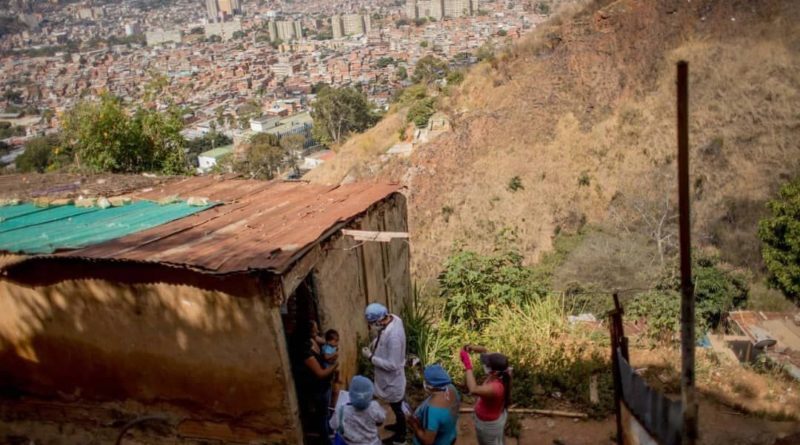 The coronavirus has exposed many things – like a tide that recedes and exposes the wrecks and debris on the bottom of the shore: starved hospitals, inadequate public health services, inept people in important political positions, stark inequality and a world economy disintegrating by its very own profiteering and imbalance.

Any illusion that the USA is a world leader has been laid to rest. No solidarity, not one gesture of aid or cooperation has come from the USA even when China, Italy and Spain have been gravely afflicted. On the contrary, President Trump showing his deep racism, has tried to blame the virus on others, calling it a “Chinese virus’”. The USA has stepped up its illegal sanctions against 10 countries especially Iran, China, Cuba, Nicaragua and Venezuela, despite pleas that they be suspended so that medicines can be bought. They have even now stopped ships travelling to take medicines to Venezuela. This is unbelievable inhumanity.

But the USA has done what it loves best: react militarily deploying troops to Europe, despite the pandemic, for military exercises that –ironically- are called “Defender 20”. USA citizens, true to their constitution, have reacted similarly with massive shopping sprees for guns. It has been widely reported that USA has offered $1billion to CureVac a German company, for the EXCLUSIVE right of the USA to a vaccine they are developing. It was met with a firm NO from the company and it prompted the German Minister of Foreign Affairs to state: “Germany is not for sale”.

But the truth is that the USA, the wealthiest country in the world, cannot even care for its own population. The pandemic has shown it has a seriously inadequate national public health system. It has appalling leadership from its mentally and morally challenged president and even its experts have delivered mixed, rather chaotic messages. So, 30 million of its citizens without medical coverage, without sick leave, and half a million living on the streets are bearing the brunt of this viral pandemic and the ad hoc flurry of social and political responses to it.

Canada has fared better as it has a strong health care system, more generic medicines available, public health experts that are listened to, and federal, provincial and municipal governments, although timidly at first, that are responding. However, fear of the erratic Trump is in evidence. Trudeau first closed the Canadian border to foreigners, except people from the USA who posed the greatest threat to Canada. That caused a strong negative reaction, and now the decision has been reversed “in agreement with the USA”, while still allowing trade between the two countries.

Europe has fared only slightly better than the USA, after most countries have laboured under years of ideological led austerity cuts that have weakened their social and medical systems. In the United Kingdom the leadership of Boris Johnson has been abysmal, and it is only at this late date – considering the virus’ horrifying capacity to spread- that stricter measures are being applied.

There will be political impacts in Europe when all this is over. They have shown very little solidarity, even sympathy, with each other and especially for the most afflicted, Italy. Who has Italy appealed to for help, asking for medical doctors? To three supposed “dictatorships”, three maligned international pariahs: China, Cuba and Venezuela. And they have stepped up to help all sending doctors to Italy.

Cuba was first on the spot in China in the midst of the Wuhan crisis bringing doctors and their anti-viral medicine Interferon Alfa 2, which has been very successful in saving the lives of the afflicted. Then after the peak had waned, China has sent help to Italy. Italians from their balconies played the national anthem of China in gratitude to them on their arrival. And the little island of Cuba has shown once again what socialist international solidarity is by giving refuge in its harbour to the MS. Braemen, a British cruise ship with coronavirus cases that no one wanted to receive.

A delegation of Cuban doctors arrived in Venezuela two days ago along with the Cuban Minister of Health and Dr. Luis Herrera, the creator of the Interferon Alfa 2. Cuba and Chinese experts are also helping Venezuela in this hour of need.

Venezuela, the supposed failed state, has an enlightened leader, President Nicolás Maduro, who started the preventive measures before even one case had been detected but warned the nation that it was only a matter of time when there would be cases. The President, who has two sisters who are medical doctors, a vice-president that is a doctor and several more medics in his inner circle, has understood full well the nature of the dangers. Venezuela has the great advantage of a government that takes its responsibility seriously, takes scientific advice, acted immediately and is now to be hailed for its prevention measures that have surely saved lives. And all this while suffering under illegal and inhuman USA sanctions that make medical supplies even more scarce. It is the first country in Latin America to implement collective quarantine and cancellation of all public events against the coronavirus. Venezuela has up to now, 42 cases of coronavirus and no deaths.

Venezuelans are kept informed regularly; communications of all sorts are used to teach them about the virus, how to make their own facemasks and what to do and not do. Most importantly, there is highly coordinated and consistent leadership of experts that has at its service a plethora of community organizations and movements, that have been mobilized along with police, military, militia, municipal authorities, to deliver food, medicine, vigilance, and assistance in all ways possible. The perverse economic war the USA has waged against the country has been met by Venezuelans with strong community infrastructure and solidarity which now is a great assent in dealing with the pandemic.

Venezuela, barred by the USA illegal sanctions from buying internationally medicine and food, stopped from selling its oil, having had its financial assets stolen by the USA and by European banks, having its oil company in the USA CITGO robbed by the Trump administration, is very much in need. The Venezuelan Foreign Affairs Minister requested a $5 billion loan from the IMF exclusively for buying medicines, a loan to which Venezuela is entitled, but was refused on the grounds that member countries disagreed on who the president of the country is, thus demonstrating clearly that the IMF is the subservient creature of USA imperialism.

Nicolás Maduro is recognized by the great majority of the United Nations as president, most of all, recognized by his own people as having won the transparent presidential elections of 2018 with 67% of the votes. And today, he is clearly the man who is leading Venezuela with intelligence and resolve in this frightful pandemic. Many powerful countries of the world can only wish they had a leader like him.

“It is the hour of solidarity, of love, of protecting each other and everyone,” Nicolás Maduro, President of Venezuela.

Featured image: Caracas – Venezuelan and Cuban doctors are going house by house (rancho by rancho too) to identify Covid-19 cases with the help of the Patria system.