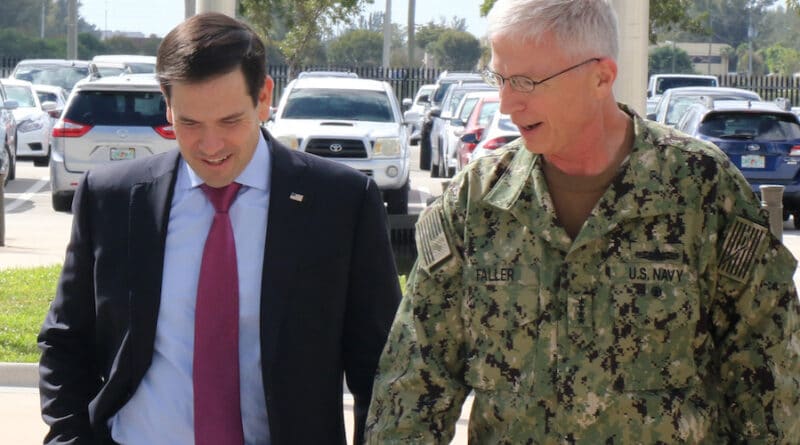 The head of the Southern Command of the United States Armed Forces, Craig Faller, declared that Russia and Cuba represents a threat to them due to the “fundamental” support they give to Venezuela, a country on which the Donald Trump regime has imposed a brutal total blockade and continually threatens military invasion.

In viralized statements on social networks, Faller says that they have had to set off the alarms because of “the size of the threat” represented by “Russian influence” and the support that the Eurasian country gives to the government presided over by Nicolás Maduro.

RELATED CONTENT: Open Letter to Progressives: The ADL is Not an Ally.

“I cannot describe the size of the threat. Russian influence is essential to sustain Nicolás Maduro in power, I look with alarm at what Russia is doing in Venezuela in terms of personnel,” said Faller during a forum called “Countering the global network of illicit activities of the Maduro regime,” a narrative used by Washington to attack Venezuela ignoring that the real support of the Bolivarian Revolution is civic-military union and the historical anti-imperialist project built by Hugo Chavez and continued by President Maduro.

The event, according to news agencies, was organized by the right wing think tank Atlantic Council, and has the participation of Carrie Filipetti , deputy undersecretary of the Trump regime for Cuba and Venezuela.

Faller also said that his command works together with “Colombia and the allies” to continue “carrying out (military) actions in Central America, supposedly” against drug trafficking and terrorism operations,” operations carried out for more than two decades with terrible results according to UN reports.

The results of these efforts “against drug trafficking and terrorism” only reflect a sustained increase in the massive traffic of cocaine, among other drugs, to the United States, a fact that has made Colombia the world’s leading drug exporter. United States is the largest consumer, something similar to what happened with the opium and heroin market in Afghanistan after the arrival of US troops.