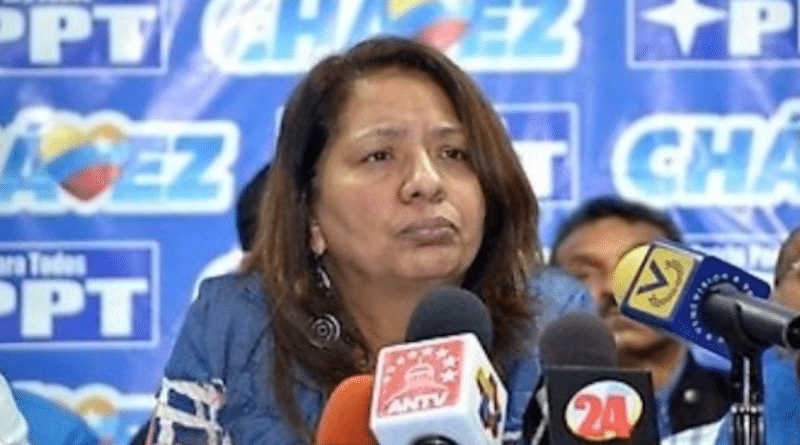 “For the PPT it is a constituent principle when in 2005 we declared ourselves militants of the revolutionary unity and the Great Patriotic Pole (GPP),” said the leader of the PPT, Ilenia Medina, referring to the decision of the Constitutional Chamber of the Supreme Court of Justice (TSJ), which suspended the current board of directors, headed by Rafael Uzcátegui, of the political party Patria Para Todos (PPT), after admitting the precautionary measure requested by members of the political organization, including Medina.

The leader pointed out that the party adheres to the unitary bloc to participate in the parliamentary elections, and that they will continue working on the construction of socialism.

She highlighted that they went to the highest court in view of the fact that, although within the party the establishment of an electoral commission had been approved by consensus to evaluate the alliances for parliamentary elections, “one sector unilaterally did not comply with what had been accepted by consensus,” she said in reference to Uzcategui and the recently announced alliance with the Venezuelan Communist Party (PCV) to run independently from the Chavista electoral alliance known as “Gran Polo Patriotico.”

She stressed that the decision to appeal to the Supreme Court was not easy, but added that “the governing bodies of Patria para Todos has been ignored.”

Medina added that “when we saw that the internal recourse for conciliation and rapprochement was not possible, we assumed the responsibility of going to create an Ad Hoc board, as indicated in the party’s statutes,” which, as she said, among its attributions, according to to the statute of the PPT, must address internal conflicts.

The ruling, published on the TSJ website, guarantees that the Ad-Hoc board will be able to use the party logo on the electoral ballot, as well as all the concepts and emblems of the political organization.

In this sense, she assured that the party will participate in the parliamentary elections on December 6.

“Patria Para Todos will be there with its identifying party ballot, with all the vitality and vibrant force that we have always placed in our political actions,” Medina said.

PCV seeks alliances with other left-wing parties
The general secretary of the Communist Party of Venezuela, Óscar Figuera, indicated that together with the PPT and Tupamaro they are on the way to the construction of what they have called the Popular Revolutionary Alternative, in the face of the parliamentary elections.

“We are building a force that will become a benchmark for the struggles of the Venezuelan people, in the face of the aggression of imperialism and in the face of the insurgency of the submissive reformism, which today dominates the leadership of the process.” Figuera said.