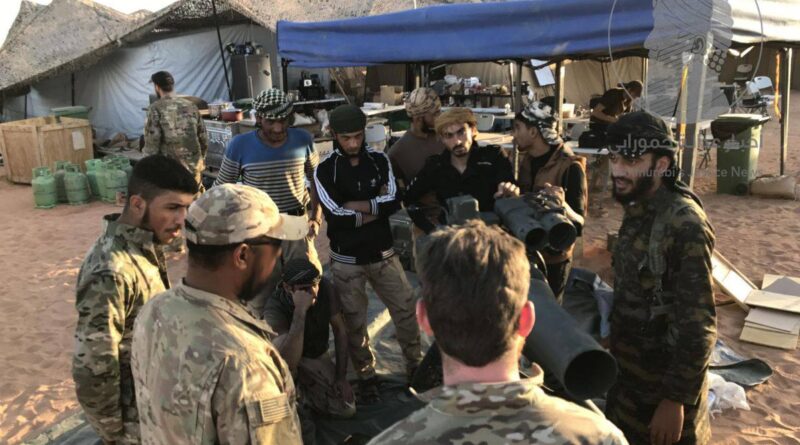 Many questions remain unanswered about the al-Tanf United States base in the Syrian desert, that is called illegal by the Syrian government and Russia. Why is al-Tanf so important to the US? What are the US soldiers still doing there? Who else are hosted in the al-Tanf pocket? Why is ISIS growing again? Is al-Tanf really a launching pad for ISIS attacks in the region?

Why is the al-Tanf base so important to the US?
The al-Tanf base is located in the al-Tanf pocket, at about 20km of the al-Tanf border crossing. It’s 55 km-deconfliction zone is located along the border with Iraq and Jordan, and cuts off the Baghdad-Damascus highway. By controlling this highway, the United States ensures that Iranian deliveries to the Syrian capital Damascus cannot take place by land. This is of high strategic importance to the US, because Iranian shipments and air deliveries are much easier intercepted, and form an easy target to Israeli airstrikes.

The US-led coalition forces use al-Tanf as an entrance point to launch operations into Syria. The base can be easily reached from both Baghdad and Jordan. Both the Syrian government and Russian officials have repeatedly stated that the al-Tanf zone are being used by terrorist groups active in the region, as a safe haven and a foothold to carry out attacks on government-held areas and Iranian proxy-groups in the Bukamal area. This ‘ISIS rear base’ has been actively protected by the forces stationed at al-Tanf, which threaten any deployment of the Syrian Arab Army, Iranian proxy-groups and Russian forces close to the al-Tanf zone. The formal justification given by the US surrounding these actions is that Syrian government troops as well as Iranian-backed forces in Syria pose a threat to US-backed ‘less-radical’ rebel groups and US troops deployed at the garrison.

Oil, Rebels, Iran, Chaos and Leverage
Many allegations exist surrounding the activities of the US soldiers present at al-Tanf, even though the Trump-administration claimed it wanted to pull back troops from Syria and victory had been announced over ISIS.

One of the reasons is the presence of US-backed ‘rebel’ groups such as Maghweer al-Thora. According to an OIR inspector general report released Aug. 4. 2020, OIR officials want to want to double the size of US-proxy forces in Syria and finish training a 2,200-man “oilfield guard” unit there.

The same report also mentions the oil revenues of the area. US-backed forces likely produced at least 30,000 barrels of oil per day, garnering nearly $3 million a day in revenue, until the recent price collapse. “Although US-backed Kurdish forces have “bolstered” their “security presence near major oil and gas fields in northeastern Syria,” they have “remained co-located with Coalition forces whose protection SDF leaders still depend on,” the IG report also reads, reminding us of the cooperation of a shady US oil company partnering up with the Kurdish-led SDF to refine and sell Syria’s oil. The Kurdish-led SDF occupies a great part of the country’s wheat fields and the majority of Syria’s oilfields, and thus actively threaten Syria’s economy. Another reason the US government might utter are ‘humanitarian reasons’ as there are 10,000 refugees and Bedouins living inside the deconfliction zone, which is heavily infiltrated by ISIS militants and said to be a launching pad for ISIS attacks by Syrian officials. US officials might claim these ‘refugees’ have been under US protection for years now, and leaving them behind might put them in danger, so they must stay.

Army Gen. Joseph Votel, the top U.S. commander for the Middle East, acknowledged the base’s strategic importance in countering the sway of Iran. He was quoted as saying following: “al-Tanf’s location is also central to its role in preventing the Iranians from gaining a firmer foothold in the region. The base sits in the heart of what Iran hopes will be part of a “Shia Crescent,” a continuous land bridge linking Iran through Iraq and Syria to Lebanon.” US officials have also said that their presence at al-Tanf could form leverage in the negotiations on the outcome of the conflict. As Syria, Russia, Turkey and Iran all want the United States to leave Syria, it might give them some leverage when Syria’s future will be formed.

Maghaweer al-Thowra, liberated ISIS prisoners, and the British SAS
As mentioned earlier, the rebel group Revolutionary Commando Army or Maghaweer al-Thowra is hosted in the al-Tanf pocket, they are called ‘less radical’ are trained by US soldiers to fight in anti-ISIS operations. Yet, defects of the group have claimed that ‘U.S. troops at Al-Tanf base sold weapons to ISIS in Syria’ and use the group to hinder operations of the Syrian Arab Army and Iranian proxies in the area instead.

“American instructors trained them to carry out sabotage at oil and transport infrastructure, as well as for terrorist acts in the Syrian government-controlled territories,” stated another group of defectors of Maghaweer al-Thowra. In addition to US-backed rebel groups, it is also stated that former ISIS militants are being hosted in the al-Tanf pocket. Though the US forces have not denied that ISIS militants may have infiltrated the refugees there, multiple reports state that ISIS prisoners released by Kurdish officials have been massively transported to the US military base. Western forces are also using the al-Tanf base. The British special forces SAS have been operating alongside US forces and Syrian ‘rebels’ since 2016 in operations hidden from the public. The British covert operation started as early as 2011, when the British were assisting the earliest Syrian ‘rebels’ and assessing their needs to overthrow Syrian president Assad. The SAS began actively training the ‘rebels’ fighting Assad from bases in Jordan in 2012. At the same time, the SAS also began “slipping into Syria on missions”. That the rebels they supported had strong affiliations with ISIS did not matter to them. The Free Syrian Army that was supported in the British operation, was in effect allied to IS until the end of 2013 and was collaborating with it on the battlefield until 2014, despite tensions between the groups. “We have good relations with our brothers in the FSA,” ISIS leader Abu Atheer said in 2013, having bought arms from the FSA.

In 2015, reports started to emerge of SAS fighters dressed as ISIS militants and waving the black flag, while at the same time continuing operations against the Syrian Arab Army.

Other reports show that the SAS has been actively training and fighting alongside the Kurdish-led SDF. British special forces continue to operate on the ground in Syria in 2019 and are reported to number at least 120 soldiers, as a new cyber unit was announced that ‘was created to take on Russian and Chinese battle tech’ and ‘also track down remaining ISIS commanders’. In 2020, the SAS has continued ‘secret maneuvers’ in Syria. They have also fought alongside the Kurdish-led SDF and were clad in Burkas during operations in the area. Reports by British media state that the forces will also be deployed to hinder Russia’s and Iran’s covert activities. SAS forces are stationed in Jordan and al-Tanf.

Why is ISIS growing again?
Attacks claimed by ISIS in both Iraq and Syria have increased significantly in 2020, demonstrating both a capacity and a willingness on ISIS’s part to continue attacks and retake territory, support in the area, and resources. ISIS has led a steady beat of assassinations, ambushes, and bombings in eastern Syria in 2020, and is responsible for the deaths of a number of Syrian and SDF forces. By August, 126 attacks by ISIS across Syria were reported for 2020—compared to 144 in all of 2019. Reasons mentioned for the ISIS resurgence in Syria are to be found in several complex situations. The Kurdish-led Syrian Democratic Forces have released more than 600 ISIS fighters and 15,000 ISIS supporters from al-Hol camp. In addition, 785 ISIS fighters escaped from Ayn Issa during Turkish shelling, and about 100 hardcore ISIS militants have reportedly escaped from ISIS prisons.

Another reason for ISIS’ opportunity to grow are the flaring tensions between the SDF and tribal forces in Deir ez-Zor, after the assassinations of several powerful Arab tribal leaders. The SDF blamed the Syrian government, Turkey, Iran and their respective local allies for using certain elements in Deir ez-Zor to cause instability. Though in 2019, victory over ISIS was declared after the last ISIS stronghold was retaken in the battle for Baghouz, the amount of ISIS attacks has seemed to have risen. Maps made by Gregory Waters show the exact location of the ISIS attacks, and how the location of the attacks suddenly spread from the al-Tanf/al-Bukamal axis to the Deir ez-Zor-Uqayribat axis (ISIS stronghold that was liberated by the Syrian Arab Army in 2017) in 2020, as well as multiplying and intensifying by orders of magnitude. 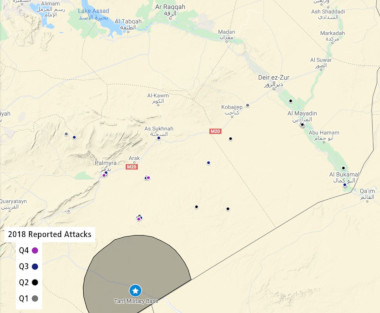 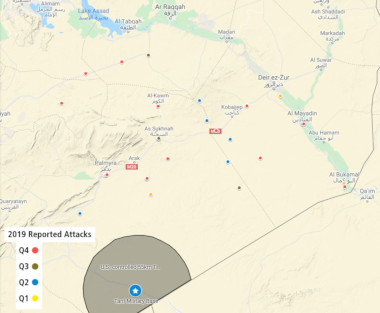 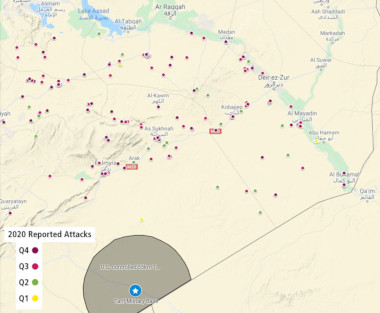 By analyzing these maps, an interesting trend can be seen. ISIS attacks seem to focus on areas that have been recaptured by the Syrian Arab Army, stretching deeply in SAA territory. Other ISIS attacks focus on Iranian proxies from al-Bukamal to Deir ez-Zor. An amount of ISIS attacks also occurred in SDF-held territories, focusing on the Deir ez-Zor region. These attacks conveniently seem to target tribal leaders that oppose the SDF-US oil deal.

The al-Tanf pocket hosts ISIS-affiliated refugees and militias like Maghaweer al-Thowra, that have cooperated with ISIS and use quite the same modus operandi. These groups still receive training by US soldiers today.

It is undeniable that escaped or released ISIS fighters may have rejoined the group. Released jihadists often return to ISIS or similar groups.

British SAS forces remain operative in the reason, and are stationed in Jordan and al-Tanf, from where they launch operations. Little is known about their activities in Syria, as the SAS is exempt from freedom of information laws and operates under a strict “no comment” policy. Secrecy around the corps is pervasive.

Statements of defectors, Russian government officials and Syrian government officials, and other signs explained in this article all point in the same direction; that al-Tanf has become the launching pad of dubious activities in the region. They allege US-sponsored ISIS factions, US-backed rebel groups, or secretive SAS operations are behind the attacks.

Proving these allegations or distinguishing the real perpetrator is very hard, yet all evidence points at al-Tanf. And even if proven, accusations will remain unheard by the larger public. Yet, when arguing about this growing threat, one must take the US military’s earlier actions in the Middle East in mind. The US has a long history of state-sponsored terrorism, and cooperation with terrorist and radical jihadist groups. Proof of these operations often only shows up years after. And I myself will not be surprised if— one day—news about a clandestine ISIS-US cooperation appears in the media through leaks or whistle blowers, and that books will be written, and documentaries will be made.