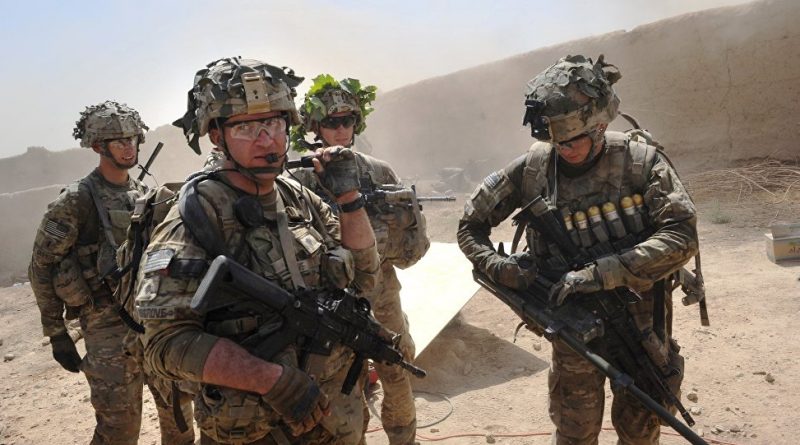 Earlier, US President Donald Trump lashed out at the group, confirming that he had cancelled planned secret meetings involving Afghan President Ashraf Ghani and Taliban leaders after the militants claimed responsibility for a recent deadly bombing attack in the Afghan capital.

The Taliban slammed the United States on Sunday, releasing a statement warning that Americans would “suffer” for cancelling planned inter-Afghan peace talks.

“The Americans will suffer more than anyone else for cancelling the talks,” Taliban spokesman Zabihullah Mujahid said, his comments cited by Reuters.

The spokesman warned the talks’ cancellation would lead to ‘further losses of US lives’ and other assets, and said the US would be forced to return to negotiations sooner or later. In the meantime, the Taliban promised to continue their war until foreign powers carry out a complete withdrawal from Afghanistan.

According to Mujahid, talks had been proceeding smoothly until Saturday, with the government and the militants agreeing to formal intra-Afghan peace talks on September 23.

Talks Collapsed For the Moment
Speaking to US media on Sunday, Secretary of State Mike Pompeo confirmed that the US-sponsored Afghan peace talks were dead “for the time being,” with Washington recalling special envoy to Afghanistan Zalmay Khalilzad to try to ‘chart the path forward’ following the talks’ collapse.

“If the Taliban don’t behave, if they don’t deliver on the commitments that they’ve made to us now for weeks, and in some cases months, the president is not going to reduce the pressure, we’re not going to reduce our support for the Afghan security forces that have fought so hard there in Afghanistan,” Pompeo told CNN’s State of the Union.

“I hope it’s the case the Taliban will change their behaviour and recommit to things we’ve [been] talking about. In the end this will be resolved through a series of conversations,” Pompeo noted, in a separate interview with ABC’s This Week.

Trump Halts Negotiations
On Saturday, President Donald Trump revealed that he planned to meet with Afghanistan’s president and, separately, with senior Taliban leaders in Camp David to discuss the prospects for peace.

However, Trump cancelled the meetings at the last minute, saying he made the decision after the Taliban claimed responsibility for a terror attack in Kabul on Thursday which killed twelve people, including a US soldier. Trump accused the Taliban of attempting to “build false leverage” to “strengthen their bargaining position,” and said that “if they cannot agree to a ceasefire during these very important peace talks, and would even kill 12 innocent people, then they probably don’t have the power to negotiate a meaningful agreement anyway.”

Later, US media reported that Trump had previously spoken to National Security Advisor John Bolton about the peace talks, with Bolton reportedly reminding him of the deal’s “potential pitfalls,” and the alleged ‘vague’ terms being offered by the Taliban.

A US-led coalition of countries has been waging a war in Afghanistan since 2001, with the US and its NATO allies invading the country after the Taliban refused to hand over Osama bin Laden and other senior al-Qaeda* leaders following the 9/11 terrorist attacks. Bin Laden was later killed in a compound in neighbouring Pakistan.

The war in Afghanistan has led to the deaths of over 2,400 US servicemen and women, with over 1,100 coalition troops and over 62,000 Afghan security forces personnel also killed. Tens of thousands of Taliban fighters and thousands of Afghan civilians have also been died, the latter as a result of terror attacks, coalition airstrikes gone awry and crossfire.

The Trump administration has attempted to negotiate a peace deal with the Taliban, reportedly offering the withdrawal of foreign troops from Afghanistan in exchange for a guarantee from the Taliban that it would cut any ties with terrorist organisations, and prevent the Central Asian country from becoming a safe haven for terrorists.

Afghanistan has been rife with violence since the early 1980s, when the USSR sent troops into the country to support a pro-Moscow government facing a growing Islamist insurgency backed by the CIA and other foreign intelligence services. Shortly after the USSR’s collapse, Moscow cut off fuel deliveries to the Afghan government, leading to its collapse, and turning the country into a failed state, with territorial control split between the Taliban and a collection of militias known as the Northern Alliance. The Taliban was overthrown in the 2001 coalition invasion, and has waged an insurgency against the US, its allies, and the Afghan government ever since.

US-Defined Peacekeeping Role ‘Incorrect’
Commenting on the tensions between President Trump and the Taliban negotiators, Afghanistan-based journalist and analyst Himat Khan told Sputnik that the way the US president has attempted to present his role in the crisis is fundamentally flawed.

Khan recalled that in addition to Taliban officials, “Trump also invited Afghan government head Ashraf Ghani to Camp David. I think Trump wanted to show to the world that he made both parties agree on negotiation with each other and that they will form a combined government, and thus [there will be] no more need for US troops [in Afghanistan], as he achieved the peace between them. Pretending that the main fight and problem of the Taliban was with the Ghani government, and that the US are playing the role of peacekeepers in Afghanistan, which is absolutely incorrect. The US-armed and invader forces in Afghanistan are the real problem, and the cause of this longest war in the history of the US.”

*A terrorist group outlawed in Russia and other countries.