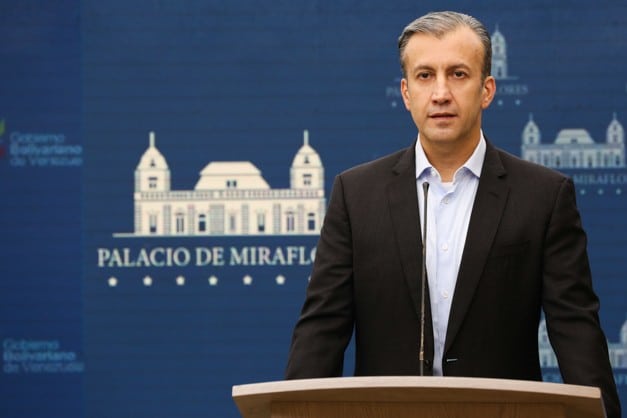 Venezuelan vice president for the Economy, Tareck El Aissami, announced this Friday the activation of a special plan for the distribution and supply of gasoline in the country for priority sectors, affected by the blockade that the United States has imposed on the Venezuelan people. He explained that the illegal sanctions or coercive measures of the United States against Venezuela impede the production of fuel, by hindering the supply of chemical inputs and additives for the production of gasoline.

“The working class of the oil industry together with the National Armed Forces work to restore the fuel supply in the country,” said El Aissami.

From the Miraflores Palace in Caracas, the vice president read a statement from the Presidential Commission Alí Rodríguez Araque, in which they denounced the United States for intending to carry out a naval blockade against Venezuela and that said blockade is further affecting the aquisition of raw materials that are required for the processing of fuel.

The text highlights that sanctions and the blockade against Venezuela are crimes against humanity, especially because they have worsened when the country fights against the coronavirus pandemic.

The Presidential Commissioner “Alí Rodríguez Araque”, faithful to his commitment to the interests of the Venezuelan Homeland, has been denouncing each of the attacks that have loomed against our oil industry in recent months; aggressions that come from the arbitrary and illegal unilateral and coercive measures imposed by the United States of America, and that constitute serious violations of the human rights of the Venezuelan people, which therefore turn them into crimes against humanity contrary in international law and Charter of the United Nations.

We denounce before national and international public opinion a series of threats recently made by the government of the United States of America against the territorial integrity and sovereignty of Venezuela, which seeks to materialize a naval blockade against our Homeland, to aggravate the situation of the Venezuelan people who today is waging an exemplary battle against the Covid-19 pandemic.

The Bolivarian government has designed and implemented strict epidemiological control and prevention measures in the spread of this terrible pandemic, which includes, among others, social, collective and voluntary quarantine, which has been highly complied with by our population.

Donald Trump’s administration has not only intensified the criminal blockade against Venezuela, preventing the legitimate availability of our financial resources to access medicines, food and essential services, but with this perverse plan of naval blockade and the recurrent intimidation it has been carrying out against potential suppliers in the country, it is preventing the supply of the chemical additives, supplies and spare parts necessary for the fuel production process that is distributed nationwide.

These extremist actions by the supremacist United States government seek to aggravate the difficulties of the Venezuelan people to face the Covid-19 pandemic, whose plan is to affect the heart of economic activity, industrial and productive development, as well as the public services of transportation, electrical energy, among others, designated as areas exempt from compliance in the quarantine to meet the vital needs of the population.

The working class of our oil industry and electricity sector, in conjunction with our Bolivarian National Armed Force, work tirelessly with deep patriotic devotion to overcome, in the shortest possible time, this situation and restore the regular supply of fuel for the entire country.

Faced with this new aggression, the activation of a Special Fuel Supply Plan has been ordered to guarantee the mobility of priority sectors within the framework of the state of alarm decreed by President Nicolás Maduro to counter the Coronavirus pandemic, and which are exempt from collective quarantine.

Likewise, we deplore the position of extremist sectors of the Venezuelan opposition, who collude with foreign governments, plan and execute these vile actions against the Venezuelan people.

History will mercilessly judge these traitors to the homeland. We are the people of Simón Bolívar, we overcome adversity, and we are certain that victory is on the future horizon, loaded with present sacrifices. It guides us and inspires the glorious and heroic victories that have marked our independence throughout our history of freedom.