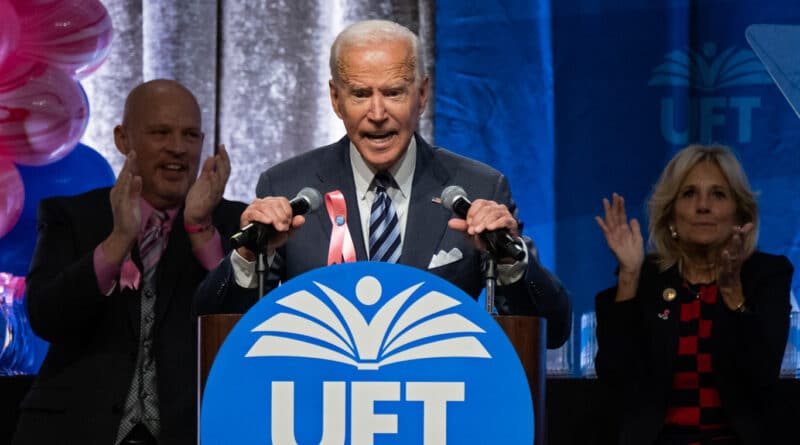 Biden has made the reopening of schools, colleges, and universities a key priority and made clear that his decision was based on the same “save the economy” logic as Trump’s.

The same teachers’ organization that roundly condemned Donald Trump’s attempts to prematurely reopen schools are now applauding Biden’s decision to do the same, even as the coronavirus pandemic reaches new levels.

Joe Biden has made the reopening of schools, colleges, and universities a key priority. On his first full day in office, he signed an executive order “to support the safe reopening and continued operation of schools, child care providers, Head Start programs, and institutions of higher education,” hoping to achieve a near full reopening within 100 days. The order states that the 78-year-old former Delaware senator considers it his duty to “ensure that students receive a high-quality education during the coronavirus.”

The country’s largest labor union, the National Education Association (NEA) came out in strong support of the move. “President Biden’s plan provides great reason for sorely-needed optimism” said the organization’s new president, Becky Pringle. “Educators are encouraged not only by President Biden’s leadership, but also by knowing that there is finally a true partner in the White House who will prioritize students by working with educators in the decision-making process,” she added in an official statement.

The NEA has a close relationship with the Democratic Party. Over 97% of NEA political donations in the last two years went to the Democrats, the organization endorsing Joe Biden for president and calling for Trump’s immediate removal from office earlier this month while putting out official statements mourning the death of liberal icons like Ruth Bader Ginsburg. Indeed, García was reported to be among the front runners for Biden’s pick as Secretary of Education.

This is quite the U-turn from the union, which boasts a membership of nearly 2.3 millioneducators nationwide. In April, as President Trump was attempting to do the same thing, the NEA offered blistering opposition. “Trump’s call to reopen school buildings is dangerous for students [and] staff,” it wrote, condemning the president’s attempts to sacrifice teachers for the sake of reopening the economy.

Similarly, in September, the organization was categorically against Trump’s renewed push to reopen. No one should listen to Trump or his Education Secretary Betsy DeVos, claimed then-NEA leader Lily Eskelsen García, accusing him of “creating more panic for stressed families” and “politicizing” the reopening of schools by linking it with the November election. Yet Biden has made clear that his decision was made on the same “save the economy” logic as Trump’s. When schools are open again, “Think of all the people who can get back to work,” he said, as he signed the order, “all the mothers and single fathers that are staying home taking care of their children.”

While we may know more about the virus now than last year, it seems clear that the pandemic is actually far more out of control now than previously. In late April, the U.S. was averaging 30,248 new cases per day and 2,010 deaths, per Worldometers data. In September, those numbers were 35,934 daily cases and 757 deaths. Today, however, the country can expect to see 193,758 new cases and around 3,176 new deaths. In fact, the ten deadliest coronavirus days have all occurred in the past four weeks. A new Washington Post-ABC News poll finds that the majority of Americans consider the pandemic to be completely out of control.

Biden’s decision also comes at a time when comparable nations are quickly moving in the opposite direction. Authorities in the United Kingdom, Germany, Ireland, Austria, Denmark and the Netherlands have all announced the closure of schools, despite lower rates of contagion than the U.S. in some cases.

“The problem is not that schools are unsafe for children,” said British Prime Minister Boris Johnson, who made the decision to close them for three months, despite previously being adamantly against the idea in principle. “The problem is schools may nonetheless act as vectors for transmission, causing the virus to spread between households.” European studies have shown that, although highly unlikely to be gravely affected by the virus themselves, children are as likely to contract and pass it on as adults, making schools potential superspreading potshots. British teachers are twice as likely to contract the coronavirus as the general population. COVID cases among American educators are also rising. While there are reasons to support reopening, particularly the psychological toll that isolation takes on children and the loss of valuable teaching time, other nations see the virus as a greater danger.

The union’s decision to support school reopening, even as the pandemic hits new heights, might suggest to some that leadership is putting its loyalties towards the party before its membership and giving Democrats a free pass.