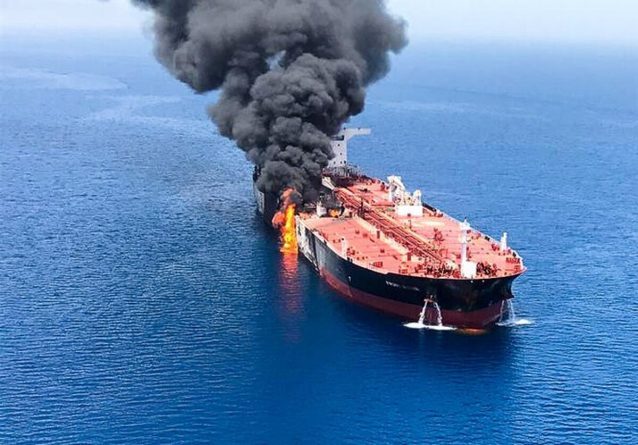 A Japanese shipping company has just confirmed its tanker was attacked in gulf. The public broadcaster NHK identified the ship as the Kokuka Courageous, one of two that were hit in suspected attacks in the Gulf of Oman on Thurdsay. Authorities are treating statements regarding this attack with caution, but terrorism is likely and has not been ruled out.

Such a pattern of recent attacks forces that larger questions of supply line security be raised, particularly as the U.S had previously announced its willingness to engage in such disruptive operations in order to contain Iran. The U.S has claimed that it aims to reduce Iran’s oil exports to ‘Zero’.

The president of the Japanese shipping company Kokuka Sangyo Ltd said one of its tankers had been attacked near the Strait of Hormuz, its president told reporters at a news conference.

Aerial footage shows one of the oil tankers targeted in the Sea of Oman#SeaofOman pic.twitter.com/mdvEPPT3J4

The public broadcaster NHK identified the ship as the Kokuka Courageous, one of two that were hit in suspected attacks in the Gulf of Oman on Thurdsay, according to shipping firms and industry sources.

Kokuka Sangyo President Yutaka Katada told reporters that the ship had been hit twice over a three-hour period before all the crew evacuated. The company first received reports of the attack around 0400 GMT, he told reporters.

All members of the crew were rescued, he told reporters. The operation was perform by Iranian rescue teams.

The Kokuka Courageous was carrying 25,000 tonnes of methanol, according to NHK.

Kokuka Sangyo declined to comment further when contacted by Reuters by phone.

Earlier Japanese Trade Minister Hiroshige Seko told reporters that the government was investigating reports that a ship carrying “Japan-related” cargo had been attacked.

The attack comes precisely as Japanese Prime Minister Shinzo Abe is in Tehran trying to help ease rising tensions between the United States and Iran. The timing of the terrorist attack therefore cannot be overlooked.

An oil tanker chartered by Taiwan’s state oil refiner CPC Corp to carry fuel from the Middle East was suspected to have been attacked earlier on Thursday, a senior company official said.

The attacks on the two tankers came a month after a similar incident in which four tankers in the region were attacked.

Benchmark oil prices surged by 4% after the attacks, which may stoke tensions in the region that have already been heightened by a dispute between Iran and the U.S. over Tehran’s nuclear programme.

The Gulf of Oman lies at the entrance to the Strait of Hormuz, a major strategic waterway through which a fifth of global oil consumption passes from Middle East producers.

There was no immediate confirmation from authorities in Oman or the United Arab Emirates, in whose territorial waters four tankers were hit last month. An investigation said limpet mines were used. U.S. and Saudi officials blamed Iran for the May attack, a charge Tehran has denied.

Saudi Arabia and the UAE have said the attacks on oil assets in the Gulf pose a risk to global oil supplies and regional security.