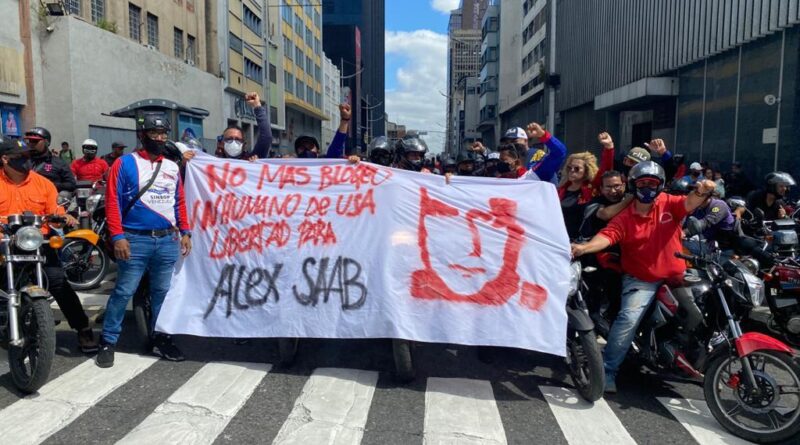 With the possible extradition of a Venezuelan diplomat to the US on bogus charges, an emergency human rights delegation organized by the International Campaign to Free Alex Saab was quickly dispatched to Cabo Verde, where he is imprisoned. This island archipelago nation off the west coast of Africa is one of the smallest, poorest, and geographically isolated countries in the world.

The international human rights delegation did not gain Alex Saab’s freedom. They were even denied a visit with him. But breakthroughs were made raising the visibility of the case, which involves enormous political, legal, and moral issues with long-term political consequences.

The case involves the abduction of a diplomat by the world’s sole superpower locked in an unequal struggle to destroy the formerly prosperous, oil rich country of Venezuela. The attack on Venezuela is not motivated on the US part by the imperfections in Venezuelan society, but on Venezuela’s past successes in fighting poverty, promoting regional integration, and acting like a sovereign nation. Otherwise, the US would be lavishing Venezuela with aid instead of the apartheid state of Israel, the narco-state of Colombia, and the absolute monarchy of Saudi Arabia.

The kidnapping of Alex Saab is a dramatic and far-reaching effort to enforce the illegal US-decreed policy of economic sanctions. The US is attempting to impose its will on a country by deliberately attacking the civilian population. Illegal sanctions are a conscious policy of imposing economic havoc to “make the economy scream.”

Saab, a Venezuelan diplomat abducted by the US government a year ago, was held under torturous conditions. The illegal denial of diplomatic immunity by the US is a violation of international law.

International Campaign to Free Alex Saab
The powerful corporate media, by omission, can render a news item invisible. The Saab case is virtually unknown in the US, even among progressive political journalists, left organizations, and solidarity activists. Washington’s demand for the extradition of Alex Saab is being covered more extensively in African and Latin American publications. In Venezuela, as expected, the case is well known.

Among some, who are aware of the case, there is an inordinate concentration on the Saab the individual, obscuring the larger issues of sovereignty and human rights.

Gathering information on what was involved was no easy task. The US charge of “money laundering” by a private businessman in a country wracked by extreme shortages hardly created sympathy for Mr. Saab’s case. It was only as the actual facts emerged that a support plan evolved for the international solidarity campaign.

The fact that Alex Saab has withstood a year-long arrest, torture, months of solitary confinement rather than comply with US demands to cooperate indicates that he is not just a businessman willing to sell to the highest bidder.

The four-person human rights delegation in Cabo Verde, knocked on government doors, conducted interviews, and spoke with the media. They were supported by an activist movement and a strong legal team. The delegation was led by a Cabo Verde citizen, Bishop Filipe Teixeira, OFSCJ, a religious leader living in the Boston area with congregation of Cabo Verdeans and a history of participation in social justice campaigns. Tweets, Facebook links, and news reports helped penetrate the wall of silence.

An international petition campaign building momentum, collecting thousands of signatures which are being forwarded the president and prime minister of Cabo Verde and to the US president. Several webinars were held, including one with Saab’s lawyers speaking from Cabo Verde and Nigeria.

Role of solidarity activists
Solidarity and people’s movements working together can become a powerful material force, breaking through silence, fear, and repression. The focus for international solidarity work in this period is to strongly defend movements and even countries under relentless US imperialist attack and destabilization without placing unrealistic expectations or creating unrealistic images of how wonderful the internal situation in the targeted country is. Solidarity is not a pass for interference, second guessing, criticism, or for euphoric idealism.

It is essential to focus full attention on the source of the problem—US imperialism—and not get lost in the weeds of the criticizing the victim. US sabotage, imposed shortages, mercenary attacks, and fueling national antagonism are intended to create and intensify internal divisions. Shortages are intended to increase corruption, side deals, privilege, and resentment. The targeted country may, thus, be wrongly blamed for the unfolding crisis created by the US actions.

Simply put, many progressive goals are thwarted under conditions of illegal sanctions, because that is the purpose of the sanctions. Self-defense by the victimized country is an obligation in the face of destabilization and constant sabotage.

At each step, keeping the focus on the crime of the US actions provides a grounding for progressive solidarity. This is true not only in defending attempts at revolutionary change, such as Cuba or Venezuela. But even in Cabo Verde, the focus on the role of the US was important. It was hardly a decision by the government of Cabo Verde to pull Alex Saab from his plane or to order him held. Cabo Verde’s isolation and strategic position simply made that country a convenient location for the long arm of US extraterritorial judicial overreach.

This case must become a global challenge to arrogant US lawlessness.

Sara Flounders of International Action Center and Roger D. Harris of Task Force on the Americas were in Cabo Verde during June 3 -10 on the emergency human rights delegation organized by the International Campaign to Free Alex Saab.