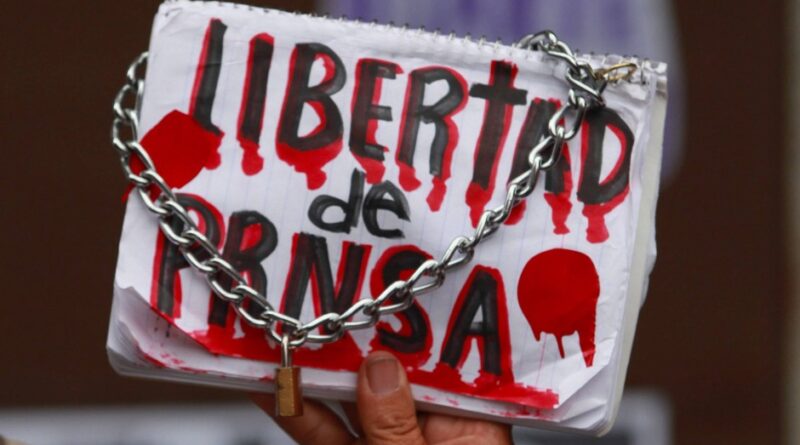 One of the main strategies of dictators – explicit, covered-up, or frankly evolving – is to attack the independent press in order to cut off with a single accurate stroke the abilities for reflection and analysis, and the call-outs to citizens about abuses by those who govern them.  A press correctly oriented toward unrestricted freedom of expression and the right of people to be informed is the indispensable instrument for strengthening democracy.  Those who aim to wield power without opposition in a controlled environment that is not exposed to public scrutiny know this well.

Attacks on reporters at protest demonstrations simply follow the “instructions manual” of absolutist regimes, as do the infiltration of criminal elements in the heart of peaceful actions with the goal of creating fear, doubt and desertions.  Physical attacks against members of the press are precisely directed toward avoiding the dissemination of true news and the revelations of police abuses against a defenseless population.  The examples of Guatemala, France, Hong Kong, Chile and other countries in full political turmoil show in a very explicit way how important it is for anti-democratic projects to silence independent journalists, while they grease the palms of the sold-out press with millions of dollars in publicity and bribes.

The price of not knowing is too high for us to ignore this danger.  The people should never be left out of the flow of information about the plans, actions, and implicit risks in the conduct of their institutions.  This is why we see repression and attacks against the press from governments allied with criminal organizations, as in Guatemala, or a government dedicated to completely plundering the natural resources, as in Chile, or a government involved in the destruction of humanistic values that are foundations of one of the strongest democracies, as in France.

The profession of journalism is under enormous pressure, and one of the riskiest aspects is the weakening of its sources of finance.  The traditional framework of newspapers and television news programs with large arrays of reporters, editors, photographers, and layout artists gradually began to disintegrate with easy access to information via social media and on-line sources, and today there are thousands of unemployed journalists.  Nevertheless, this reality that has strongly battered press professionals has also been a tremendous blow to the rights of a well-informed citizenship.

The danger of not knowing is real, and has, in fact, had great influence in the profound ignorance of some societies about the truth of their past, the dangers of their present and of their future.  This is the reality in many countries in the hands of powerful corrupt groups, but we can be on our guard against an almost infallible system of propaganda by means of which they deceive a people who have been subjected to disinformation and achieve their goal of consolidating power in each electoral process, raising the most corrupt individuals to power, thanks to their resources allowing them to sign contracts worth millions with their media allies. The right to public information is inalienable in any democratic system.  However, those who work daily to give citizens a true and complete report about the decisions that affect their lives, their economy and the future of their family, have to fight against the opposing forces and risk their lives in the process.  To “have their backs” and contribute to maintain their independence is an important task that societies today must carry out for the sake of their own survival.

To support a free press is a way of practicing citizenship.