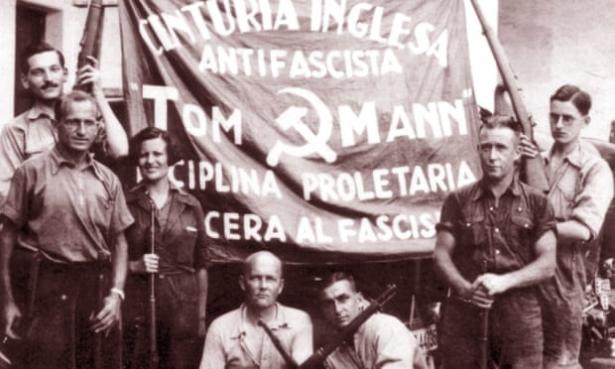 Hemingway, Orwell and a host of others have written gainfully on the International Brigades’ resistance to Spanish Fascism. The book under review, based on extensive interviews and deep research, is considered by the reviewer to be the masterwork.

“We shall not forget you,” promised the famous Spanish communist known as La Pasionaria, addressing the surviving International Brigades as they departed Barcelona in October 1938, with Franco’s victory in the Spanish civil war nearly complete: “And when the olive tree of peace is in flower … return!” In mid-September 2020, the Spanish cabinet made a remarkable gesture in the same spirit: approving a draft of a new “democratic memory” law, which would offer citizenship to the descendants of those same volunteers. “It is about time we said to these heroes and heroines of democracy: thank you for coming,” Deputy PM Pablo Iglesias wrote.

A government spokesperson later rowed back on this highly unusual idea, but its spirit speaks to a unique moment in 20th-century history, where the engine of political change was in overdrive across Europe, to the point that volunteers travelled in their thousands to fight fascism and defend democracy in a foreign land, in the face of their own government’s indifference. There exist few parallels either before or since, although the journey of some volunteers to help the Kurds fighting Islamic State is one notable exception. For the late academic and writer David Graeber, whose father volunteered to fight fascism in Spain, the resonance was especially painful; he argued in the Guardian that the west’s abandonment of the struggle in Rojava, Syria, was tantamount to letting history repeat itself.

The Spanish civil war has long been valorised by the European left, documented, debated and commemorated in incredible detail – in many thousands of books, but also in film, in song, in musical theatre, in poster exhibitions, badges and T-shirts. And while there are many tales of selfless sacrifice, solidarity and idealism, there is also much in the story that is inglorious – the boredom, unpreparedness and terrible equipment, the panic, internal arguments and betrayals, lice, accidental deaths and injuries and Franco’s eventual triumph.

Imposing order on a history that is both chaotic and contentious can be tricky, but like the volunteer army itself, Giles Tremlett’s epic new book is greater than the sum of its many parts. It comprises 52 time-specific chapters, discrete moments, battles, battalions and tales, building into a narrative of astonishing scope. Tremlett is known for his reporting and several books, among them the excellent Ghosts of Spain, which looks at the shadows cast by the “memory wars” in a country otherwise riding high, pre-financial crash. This latest study is a remarkable act of scholarship, as well as being captivatingly readable. The first overarching history of the brigades in English, it is alive with the testimonies of those who fought, and so much richer for stretching far beyond the obvious and famous Anglophone accounts of men of letters.

It is true the brigades drew an astonishing array of international literary figures – Orwell, Hemingway, Spender, Auden – and also great photographers, artists, and politicians in the making. But above all, it attracted working-class men and women from across Europe and beyond: many of them already refugees, those fleeing or fearing persecution, unemployment and degradation. There were French, Poles, Germans and Italians in their thousands, but also brigaders from Ethiopia, Argentina, Indonesia, Japan and Pakistan. A good half of those who volunteered were communists, and they did so alongside socialists, anarchists, liberals, democrats, people of all faiths and none, even a few conservatives and politically agnostic adventurers, from 65 countries, with only one thing uniting them: anti-fascism. Remarkable individual lives fly past in a single tantalising line: the three Jewish tailors from Stepney who had “arrived by bicycle”, for example.

In one of many unforgettable vignettes, a trainload of new volunteers from “all the nations in Europe, and some from outside Europe as well” crossing the border into Spain with no common language, join together to sing the “Internationale”, but each doing so in their own tongue. “I find it extremely difficult to explain how exhilarating this was,” recalls a British volunteer. “I don’t think I’ve ever felt the same feeling at any other time in my life.”

For too long the volunteers were fighting an amateur war in defence of the republic; they were a ragtag collection of militias in mismatched uniforms, who looked, in the words of artist Felicia Browne, “like pirates”. In October 1936, when the first official brigade departed from a base in Albacete for the front, the British writer John Sommerfield recalled that their uniforms and equipment had arrived that very afternoon. “Everyone got something and no one got everything. We marched off looking like a lot of scarecrows, and in filthy tempers.”

Bad weapons, lack of training, the urgency of the conflict and, in the minds of some brigaders, “absurd democratisation” weakened discipline in the ranks. Tremlett records the distrust and tensions, especially in the anarchist and Poum ranks, over the Soviet Union’s semi-professionalisation of the initial anti-fascist militias: “Discipline was something that the fascist army in front of them used to oppress its working-class soldiers,” Tremlett writes. These were internal suspicions that would last almost throughout the three-year conflict.

As recounted in one horrifying chapter, the Sans Nom, or “nameless” battalion of Poles, Serbs and other miscellaneous non-French volunteers, went to the southern front in Andalusia after just five days of training, having fired only six practice shots each, with only four of their 36 machine guns working. They were sent into battle on Christmas Eve without maps, mostly on foot, right into a Francoist assault. Abandoned by their commander to the fascists’ Moroccan cavalry, they fled chaotically – rather than beating an organised retreat – across the substantial Guadalquivir river, where some drowned, and others were picked off with ease on the other side. On Christmas Day, unarmed groups and individuals wandered the olive groves, lost, clothes in tatters, eating bitter olives and grass for sustenance; only half of the 700 Sans Nom volunteers made it back alive.

Betrayal is a thread that runs throughout the Spanish tragedy. The brigades were often let down by their Soviet and Spanish commanders, but also by their own governments, who left both their lives and that of Spanish democracy to the fate of the aerial assault of Hitler and Mussolini. On returning to their own countries – those who did make it home; one-fifth of British volunteers died in Spain – many were treated as dangerous dissidents, spied on and prevented from fighting fascism in the second world war. But they were not abandoned by the establishment in its entirety: it is notable that both Clement Attlee and the anti-appeasement Edward Heath were among the crowd at Victoria Station to welcome home the returning British volunteers.

The International Brigades arrives at a critical point in more ways than one. It would be useful for some contemporary pundits and politicians to be reminded that “horseshoe theory”, which places anti-fascist activity in the same category as the fascists they oppose, is dangerous nonsense. But it is also a critical point for the legacy of the brigaders: the last British veteran, Geoffrey Servante, died last year at the age of 99; there are at most a couple of other survivors left in the world.

Fortunately, Tremlett is a worthy custodian of their stories. He has created a dazzling mosaic of vignettes and sources, of lives lived and lost, of acts of heroism, solidarity, betrayal and futility, that builds to a grand picture of a conflict that drew idealists from across the world. The war left many of them in despair, injured or dead – but also hardened many more in their determination to defeat fascism. This book is as close to a definitive history as we are likely to get.

Book author Gilles Tremlett is a correspondent for the London Guardian based in Spain. Historian and journalist as well as a Fellow of the Cañada Blanch Centre at the London School of Economics, he is the author of Ghosts of Spain and biographies of Catherine of Aragon and Isabella of Castile.