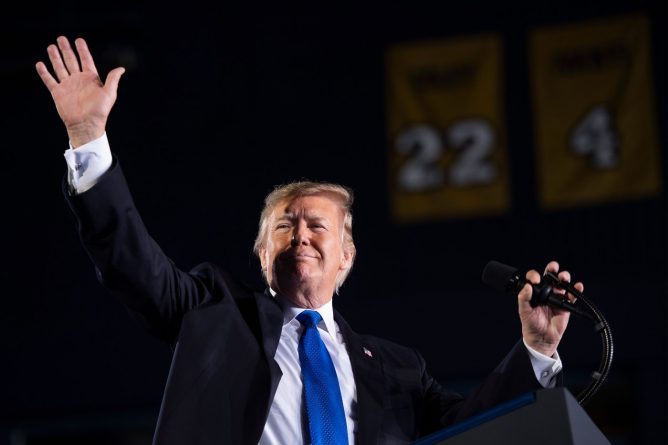 Some of the governments supporting Trump’s plan to starve Venezuela into submission are none too savory, themselves.

13/Mar/2019.- In the early 1970s, a handful of Sandinistas were in the mountains of Nicaragua fighting to overthrow the 40-year U.S.-backed, brutal dictatorship of the Somoza family. When a powerful volcanic eruption struck Nicaragua in 1971, Sandinista Omar Cabezas later recounted, they told the peasants whom they encountered that God was punishing them for not getting rid of Somoza.

After the Sandinistas triumphed in 1979, the U.S. waged a bloody war to take back the country with a terrorist paramilitary force called the contras, who regularly murdered civilians. President George H.W. Bush made it clear during the Sandinistas’ second election in 1990 that, although he was not God, he would continue to punish Nicaraguans with a trade embargo and war if they did not get rid of the Sandinistas. Weary of war, hyperinflation, and economic collapse, Nicaraguans voted for the opposition: The Sandinistas lost.

Today the Trump administration is repeating the collective punishment strategy in Venezuela with a crippling financial embargo since August 2017 and, since January, a trade embargo. The financial embargo has prevented any measures that the government might use to get rid of hyperinflation or bring about an economic recovery, while knocking out billions of dollars of oil production. The trade embargo is projected to cut off about 60 percent of the country’s remaining meager foreign exchange earnings, which are needed to buy medicine, food, medical supplies, and other goods essential to many Venezuelans’ survival.

Seeking to foment a military coup, a popular rebellion, or civil war, the Trump administration has made it clear that the punishment will continue until the current government is ousted. “Maduro must go,” said U.S. Vice President Mike Pence yet again in early March.

All of this is illegal under numerous treaties that the U.S. has signed, including the charter of the United Nations, the charter of the Organization of American States, and other international law and conventions. To legitimize this brutality, which has likely already killed thousands of Venezuelans by reducing access to life-saving goods and services, the Trump administration has presented the sanctions as a consensus of the “international community”—similar to what George W. Bush did when he put together a “coalition of the willing” of 48 countries to support his disastrous 2003 invasion of Iraq.

In this narrative, governments—mostly in the Americas and Europe—that have joined the U.S. in recognizing a parallel government in Venezuela are “democratic”; those who have not, or have declared against the attempt to overthrow the current government are “authoritarian,” with the examples of Russia, China, and Turkey most often listed in news reports.

Let’s look at some of the governments that have joined the Trump administration in this illegal regime change operation, and have joined the trade embargo by recognizing Juan Guaidó as “interim president.” The most important and solid ally of Trump in Latin America is Brazil’s far-right president Jair Bolsonaro, famous for telling a Brazilian congresswoman that he would not rape her because she “did not merit it,” for various racist and anti-gay remarks, and for glorifying political violence. Ironically, given that the Trump administration’s main justification for regime change in Venezuela is that Maduro’s election was illegitimate, Bolsonaro himself came to power in an election of questionable legitimacy. His leading opponent, former President Lula da Silva—at the time the most popular politician in the country—was jailed after a trial in which no material evidence of a crime was presented. The verdict rested on the coerced testimony of a witness who was convicted of corruption, and whose plea bargaining was suspended until he changed his story to match the prosecuting judge’s case. The prosecuting judge, Sérgio Moro, demonstrated strong animus against Lula on a number of occasions—including his release of illegally wiretapped conversations between Lula and then president Dilma Rousseff, his lawyer, and his wife and children. After these and other irregularities and illegalities secured Lula’s conviction, he was unconstitutionally imprisoned before the election. After the election that Judge Moro helped Bolsonaro win by these methods, he was appointed minister of justice.

Other Latin American governments in Trump’s Coalition of the Willing owe Washington some favors for helping them seize power. The government of Honduran president Juan Orlando Hernández is probably the most extreme example. His party came to power in 2009 with the overthrow of the democratically elected president Mel Zelaya in a military coup. The Obama administration, along with Republicans, helped legitimize the coup and the “elections” that followed. Hillary Clinton, then secretary of state, later described in her memoirs how she maneuvered to keep the democratically elected president from returning to office. In 2017, Hernández retained power by brazenly stealing an election—simply altering the vote totals. This was the inescapable conclusion of journalists and observers from across the political spectrum. Even one of the most fanatical leaders of Trump’s Coalition of the Willing, current OAS Secretary General Luis Almagro, rejected the results and called for new elections. Of course nothing happened because the Trump team accepted the results.

Colombia has perhaps the second-most bellicose leader in Trump’s coalition, after Bolsonaro. President Iván Duque is the protégé of former president, now kingmaker, Álvaro Uribe. U.S. diplomatic cables released last year showed widespread concerns among U.S. officials about Uribe’s ties to drug traffickers. In the 1990s, the U.S. Defense Intelligence Agency found that Uribe was “dedicated to collaboration with the Medellin [drug] cartel at high government levels.” Uribe is also believed to have long had ties to death squads. He resigned from the Colombian Senate last year in the midst of an ongoing criminal investigation. Uribe has long backed the U.S. regime-change effort against Venezuela. In 2009, numerous South American governments objected to and blocked his plans to expand the U.S. military presence in Colombia.

President Mauricio Macri of Argentina, another influential hard-right coalition member, also owes favors to Washington. In June, this relationship helped him score the biggest IMF loan in history, $50 billion dollars—subsequently upped to $56.3 billion when the economy did much worse than the IMF had forecast under the agreement. The United States blocked loans to the government of his predecessor and rival from multilateral lending institutions such as the Inter-American Development Bank. Since Argentina was running into balance of payments problems toward the end of President Cristina Fernández’s term, this was significant. An even bigger blow to her government came from an apparently politically motivated New York judge, who took more than 90 percent of Argentina’s creditors hostage in 2012 by ruling that they could not be paid until certain U.S.-based vulture funds were paid first. All of these problems with the U.S. were quickly resolved soon after Macri took office in 2015.

The media sometimes singles out President Lenín Moreno of Ecuador to show that there is a “center-left” presence in this illegal and somewhat barbaric enterprise. Moreno was indeed elected in 2017 with the support of former president Rafael Corea’s leftist Alianza PAIS party. But he quickly took a sharp turn away from his mandate, forming an alliance with right-wing oligarchs and using extra-constitutional means to consolidate power. He is now trying to put the former president in jail on what look like trumped-up charges. Moreno has been rewarded by Washington with $10 billion in loans from multilateral institutions, including $4.2 billion just scored from the IMF last week. If $10 billion doesn’t sound like a lot, consider that the loan, expressed as a percentage of the Ecuador’s economy, would be equivalent to the U.S. receiving $1.9 trillion. No surprise that Lenín Moreno has joined the Trump Coalition.

The president of Paraguay also has cause to thank the United States godfather. His party, the Colorado Party, ruled the country for 61 consecutive years, the majority of it under the dictatorship of Alfredo Stroessner. In 2008, a leftist bishop named Fernando Lugo won the presidency against heavy odds. However, he was toppled in a parliamentary coup in 2012, which was opposed by almost all of South America; once again, Washington worked with the OAS to help legitimize the coup. So, there’s another South American president happy to join the U.S.-led push for a right-wing leader in Venezuela. Yet one more is President Sebastián Piñera of Chile, a Pinochet sympathizer who appointed two former allies of the U.S.-backed dictator to his cabinet last year.

This is how we do it—today, at least. A few years ago—when most of the region was governed by left-of-center governments, Trump wouldn’t have gotten a single government in the region to support an illegal regime change operation. Obama’s secretary of state John Kerry discovered this in 2013 when violent opposition demonstrators were in the streets in Venezuela, trying to overturn Maduro’s first election. There was absolutely no doubt about the election results, and almost every government in the world recognized them. Kerry soon found himself completely isolated; Washington gave in and accepted Maduro’s election.

Then there is Europe, which for a number of historical reasons has only occasionally pursued a foreign policy independent of the United States. This is especially true for Latin America, where the Monroe Doctrine, shamelessly invoked in public by National Security Advisor John Bolton a few days ago, is generally respected. That said, some arm twisting was necessary to flip Prime Minister Pedro Sánchez of Spain, who had rather insubordinately opposed the Trump sanctions against Venezuela even prior to the trade embargo and recognition of Guaidó in January. His foreign minister, Josep Borell, told the press that the administration had received “pressure” from Washington. Sánchez’s PSOE socialist-led government was also under intense pressure from the big Spanish media, which has been in full regime-change mode for some time; they face elections at the end of April. Spain was particularly important in securing European support for this venture, since other countries, including Germany, often take Spain’s view seriously on policy in Latin America.

Even if the Trump team had a global majority—which it doesn’t, with only 50 out of 195 countries worldwide backing Venezuelan regime change—their deadly economic sanctions, theft of assets, military threats, and other actions to topple Venezuela’s government would be no more legal or legitimate than George W. Bush’s invasion of Iraq, or the many U.S.-led regime change efforts that have taken place in this hemisphere. That’s unsurprising, given who’s at the wheel: perennial regime-change advocate John Bolton, for example, or special envoy Elliott Abrams, who supported what the UN later found to be genocide in Guatemala, as well as the US-sponsored atrocities in El Salvador and Nicaragua in the 1980s. The cast of characters supporting this regime-change effort, whether in Washington or among some of its closest allies, should underline what is already obvious: The United States’ attempt to oust Maduro has nothing to do with democracy or human rights.

Mark Weisbrot is Co-Director of the Center for Economic and Policy Research in Washington, D.C. and a columnist for The Hill.