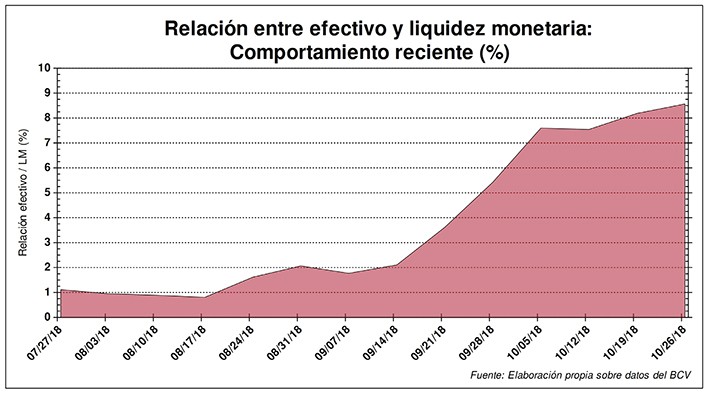 By Andres Villadiego. Special for TP

One of the major problems that have affected the Venezuelan population in recent years has been the shortage of so-called “cash”, that is, bills and coins as means of payment. This phenomenon generated in turn a series of distortions, such as the emergence of a black market for cash, the existence of a dual pricing system (a price when payment is made in cash and a different price when it is done with electronic means of payment). ) and an overload of digital payment platforms. The government insisted that this phenomenon was due to the existence of “mafias that traffic in cash” as part of the attacks on the Venezuelan economy.

From the pages of the Popular Tribune, it was pointed out that the emergence of the black market in cash is a consequence of this shortage, and not its cause (see TP Nº 2.992 and Nº 2.993 *). The real causes of the shortage of cash are found in the relationship between the amount of coins and bills in circulation and the total monetary liquidity (MM): this ratio must be adapted to the rhythm of growth of prices (inflation), and if the growth of the amount of cash in circulation is not in line with inflation, generates a shortage of means of payment.

The normalization in the availability of cash observed in the last weeks is due to the fact that the ratio cash / MM (monetary mass) grew from 0.8% in the week prior to the monetary reconversion (erasing 5 zeros to the Bolivar), to 8.6% in the penultimate week of October. If we observe that the average of this relation was of 2.7% during January-August of 2018, of 6.7% in 2017, and of 9.0% during 2016, we can verify that in the last few days the levels of 2016, although it is desirable that the ratio cash/ MM remain above 10%, as it usually did up to 2006.

Towards a new reconversion?

However, it must be noted that the correct functioning of the payment system depends on the control of inflation. Otherwise, any issue of notes and coins made by the Central Bank of Venezuela will be insufficient in the medium term to cover the needs of the population. So far there is no indication that the so-called “Recovery, Growth and Economic Prosperity Plan” implemented by the national government has managed to stop hyperinflation, and therefore, the relative improvement observed in the availability of cash runs the risk of being ephemeral .

If the hyper-inflationary dynamic continues, part of the current monetary cone will cease to be functional in a short time and larger denominations will have to be incorporated. In a matter of months, a new reconversion may be necessary, with the incorporation of a new monetary cone, which would entail high costs for the nation and additional disturbances to the already very weak economy. We insist: it is imperative to stop hyperinflation immediately as a starting point for a true economic recovery.