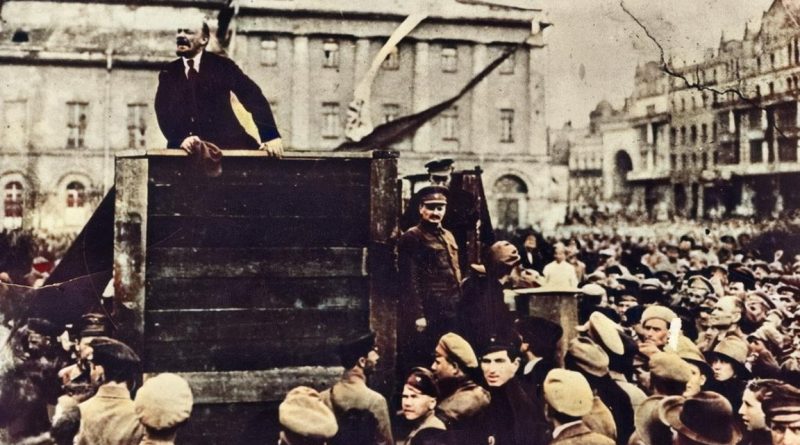 One-hundred-and-two years ago on Nov. 7, 1917, workers and peasants overthrew the capitalist government in Russia.

Two million soldiers in the Russian army had died in World War I. Russia was ruled by the cruel Czar Nicholas II.

Like the United States, the Russian Empire was a big prison of oppressed nationalities. Uzbeks, Kazakhs, Poles, Ukrainians, Georgians, Finns, Armenians and other peoples were denied self-determination.

Russian peasants and workers were also oppressed. Many had been serfs, a sort of land slavery. Serf families couldn’t be broken up and sold like cattle, as African slaves were in the U.S., but they could be worked to death. Thirty thousand serfs died building St. Petersburg, the former Russian capital.

Serfdom was abolished in 1861, two years after John Brown’s raid at Harper’s Ferry. The outbreak of the U.S. Civil War may have influenced the czar to get rid of serfdom before the serfs got rid of him.

Lenin and the Bolsheviks

By 1914, serfdom was gone, but 30,000 big landlords still ruled the countryside. The vast majority of people were peasants who couldn’t read or write. Women had no rights.

Foreign capital poured into Russia, grabbing huge profits from long workdays in the factories. Striking workers were shot down.

Oppression breeds revolution. V.I. Lenin was the greatest leader of Russia’s revolution. He built a communist party commonly known as the Bolsheviks.

Lenin studied the teachings of Karl Marx. Lenin taught that workers had to be imbued with Marx’s revolutionary knowledge and determination to win.

The first Russian Revolution broke out in 1905. Workers went on strike, shutting down factories and railroads. Peasants burned the gentry’s mansions. Czarism was on the ropes.

Workers formed councils called soviets. These councils had no formal legislative power, but they had great authority among the workers, peasants and soldiers.

European banks poured in loans to save czarist tyranny. The 1905 Revolution was defeated. The czar was able to pit peasant soldiers against workers and even other peasants, just as billionaires divide poor and working people in the U.S. today with racism and anti-immigrant bigotry.

The Bolsheviks fought pogroms with guns in hand. Lenin waged war on racism. He enriched Marxism by teaching that workers in the big capitalist countries had to support revolts in the colonies.

“What emotion, enthusiasm, clear- sightedness and confidence it instilled into me!” was how Vietnamese leader Ho Chi Minh described Lenin’s “Theses on the National and Colonial Questions.”

Five days later, czarism was overthrown. Workers, peasants and soldiers made that revolution, but capitalists controlled the new government.

For the next eight months Lenin’s Bolsheviks won millions of poor people to socialist revolution by demanding bread, peace and land. Despite Lenin and other leaders being forced underground, Bolsheviks won majorities in the soviets that sprung up everywhere.

These soviets overthrew capitalist politician Alexander Kerensky on Nov. 7 (Oct. 25 by the old Russian calendar). Many peoples, not just Russians, rose up to break their chains.

Peasants threw out their landlords. Bolsheviks exposed secret treaties among the imperialists that divided up colonies. This revolutionary energy helped overthrow Germany’s kaiser and end World War I in 1918.

Capitalist governments, including the U.S., then waged war against the Soviets on a dozen fronts. But the Red Army, organized and led by another Bolshevik leader, Leon Trotsky, was victorious.

Following Lenin’s death the enormous difficulties involved in trying to build socialism in a very underdeveloped country, encircled by imperialism, led to struggles in the party and then to backward steps. Soviet leader Joseph Stalin purged Bolshevik opponents while making concessions to careerists and increasing inequality.

Nevertheless, at the same time the Soviet Union launched the first and biggest affirmative action program in history. Every person had the right to education in their own language. The Soviet five-year plans created the world’s second-biggest economy. Everyone had a job.

But the Soviet Union remained the target of world capitalism. German big capital handed power to Adolph Hitler’s Nazi Party so the Nazis could crush the German working class. German imperialism invaded the Soviet Union in 1941.

With Stalin leading the government, the Soviet Union defeated Hitler, but nearly 26 million Soviet people died in World War II. The Red Army liberated all of Eastern Europe from Nazi rule, including the extermination camp at Auschwitz.

The Pentagon spent $5.5 trillion on nuclear weapons aimed at the Soviet Union. This relentless pressure undermined socialist solidarity and finally led to the downfall of the Soviet Union in 1991.

Despite this tremendous defeat, the lessons of the October Revolution will live forever.

Featured image: Vladimir Lenin giving a speech to the Red Army in Sverdlov Square, Moscow, May 5, 1920. On the right of the platform is Leon Trotsky, commander of the Red Army.