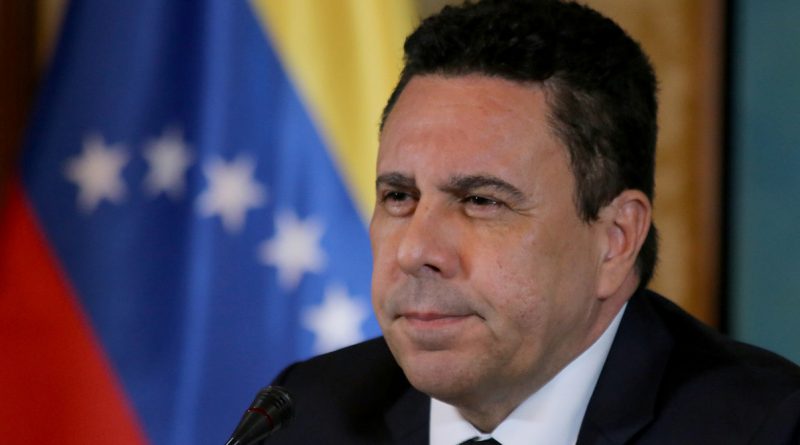 By Samuel Moncada
Nelson Bocarada was considered one of the cathedrals of Venezuelan journalism, what few knew was that he had a double life; at the same time that he was celebrated as a star journalist, he secretly served the British and American Embassy as an operator that promoted war propaganda and passed sensitive military information from his own country to the United States government. This very serious accusation has to be sustained with evidence, and not by the personal opinion of the accuser or the accused. It is not about what Moncada says or Bocaranda says, but about assessing whether the evidence presented is sufficient.
The rigorous analysis of the evidence indicates the following:
First. The source of the information:
a) The documents are real, the report of the British Ambassador in Caracas of 1982 is an official document that is in the National Archives of the United Kingdom, in London, and is available to the public. It was consulted in a transparent and legal way, just as anyone can do today. Denying the existence of this evidence is an act contrary to the professionalism that Bocaranda himself says he practices.
b) The report of the 2009 American Ambassador is another official document and is part of the thousands of confidential cables known as Wikileaks, for which Julian Assange, who simply published them, is now in prison unjustly accused of conspiring to access classified documents of the United States government. Assange’s detention is the confirmation of the veracity of the source.

RELATED CONTENT: Evidence Nelson Bocaranda Was Paid UK Propagandist During Malvinas (Falklands) War
Second. The authors of the document and their motivations:
a) The author of the British document is Hugh Carless, Ambassador to Caracas in 1982, and its editor is VJ Henderson, First Secretary. Their motive was to report the truth to their superiors in London in a safe and secret way, their interest was not to harm Nelson Bocaranda, on the contrary they clearly express that he is their ally and that they need to protect him to continue using him. The main reason was that the British could not [speak to the issue] in public directly since they knew the pro-Argentine disposition of the Venezuelan public on the Falklands War and they needed a local agent that was more convincing for their audience.
b) The author of the 2009 document, Patrick Duddy, United States Ambassador to Caracas, in the same way as in the British case, reports the truth to his superiors and considers Bocaranda a useful agent whose identity must be protected because if it was discovered, the fraud and betrayal of their local agent would be understood. We all know that if a journalist in the United States or the United Kingdom goes to the Russian or Chinese embassy, for example, with military secrets and offering himself as an instrument for war propaganda, he would be accused of serious crimes against national security. The diplomats of both countries were not writing for the year 2019 and the effect of their words changes when we read it today. This is how historical events work, the authors’ motivations in 1982 and 2009 are not the same as those of Venezuelan readers today, which is why the effects of the reading are different.
Third. The content of the documents:
a) In the British case of 1982, the Ambassador affirms that 1- Bocaranda is an Ally. 2- He handed him a film made by the British Government to be broadcast on his television program. 3- The Ambassador had no interest to appear defending his position and that is why he needed Bocaranda to play that role since it was more credible for his audience. 4- Bocaranda fulfilled the function. 5- That when fulfilling the instruction the reaction against [the material] endangered the operation. 6- Bocaranda was shocked by the result. 7- That they had almost exhausted Bocaranda’s credibility and that they should take care of him if they wanted to use him effectively next time. 8- That Bocaranda should be invited to London to do interviews and that the British Government should give all its support if it wanted the Embassy in Caracas to function more effectively.
Bocaranda purposely ignores all of the above, that has nothing to do with objectivity, professionalism, transparency or listening to both sides. He wants to throw dirt in our eyes talking about his travels to New York, or how much the ticket cost, in a typical act of manipulation. It’s not about Moncada against Bocaranda, it’s about Bocaranda against the British Ambassador; It is obvious that the British Ambassador in 1982 has more reason to tell the truth than Bocaranda in 2019.

RELATED CONTENT: New CNN Assange Smear Piece Is Amazingly Dishonest, Even For CNN
b) In the case of the United States of 2009, the Ambassador affirms that: 1- Bocaranda personally informed the Ambassador, on November 16, that Colombian guerrilla leaders were in Caracas to meet with senior Venezuelan government officials. 2- The objective was to plan a provocation on the border with Colombia, or within Colombia. 3- The operation was in response to the signing of a defense cooperation agreement between the United States and Colombia. 4- Guerrilla leaders traveled in Caracas with police protection. 5 – He did not know if they were guerrillas of the FARC or the ELN. 6- He did not know the names of the contacts in the Venezuelan Government. 7- He believed that the Venezuelan government sought to use the FARC Guerrilla or the ELN to cause an incident with Colombia. 8- He believed that Chavez did not want a war with Colombia. 9- Bocaranda had informed him reliably in the past. He informed the Ambassador personally that Venezuela had only 8 pilots for its 20 F16 planes. 11- The US Embassy shared Bocaranda’ S evaluation. 12- Bocaranda’s identity had to be strictly protected.
Bocaranda wants to escape from such an exact reality, claiming the following:
“My sin would then be that my column, my Runrunes, my writings, be so read that even the Ambassador of the United States reads them and from there he gets his data to share with his government. It is not my fault that I have credibility for the seriousness of my sources and for having earned myself respect not only from my countrymen but from other countries. I think here is the crux of this matter.”
The real crux of the matter is that Bocaranda on November 16 previously and personally informed the US Ambassador of National Security data of his own country. Nowhere does the ambassador say he was informed by reading the press releases published by Bocaranda, if that were the case: what was the need of the Ambassador to write in his secret report to Washington that Bocaranda’s identity had to be strictly protected?
The Ambassador abounds by stating that Bocaranda has been a reliable source in the past which implies that there was a continuity of relationship. It is obvious that the relationship is not equal, it is a subordinate relationship from Bocaranda to the Ambassador. This is Bocaranda secretly informing a foreign power and not the foreign power informing a national journalist, in this crux is his betrayal of his profession, his readers and his country.
We have said that in this information war against Venezuela, the aim is to control our minds by preventing us from using reason and evidence to arrive at the truth. What deprives us is insult, gossip, manipulation and concealment. Bocaranda lived too long with the lie of a star journalist, when in fact he was a pawn of foreign governments to deceive his own people. Already for history and justice it is clear who Bocaranda is and his disastrous legacy for Venezuelan and Latin American journalism; An example of what no journalist should be regardless of his political orientation. After 50 years, the truth has caught up with Bocaranda.