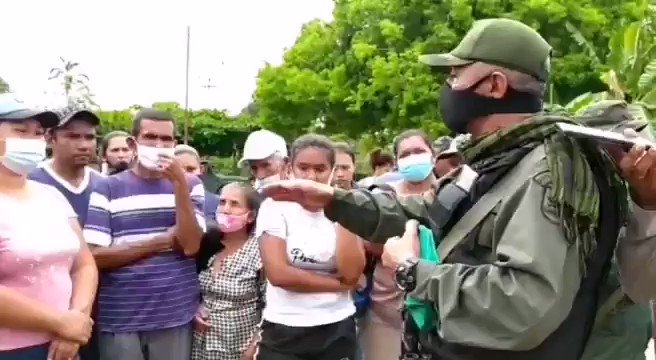 Faced with the media attacks that have generated fear and anxiety in the populations of Apure state, on the border between Venezuela and Colombia, the Bolivarian National Armed Force (FANB) has held people’s assemblies with the returnees from El Ripial. The intention is not only to accompany them after what they have experienced after fleeing the violence of Colombian paramilitary groups, but to clarify that the military body is positioned as a guarantor of the comprehensive protection of the inhabitants, and not the other way around.

It should be noted that these groups of displaced people have fled from clashes between Colombian narco paramilitary gangs trying to replicate in Venezuela the modus operandi they have long used in Colombia. These criminal gangs have tried to enter Venezuelan territory to establish illegal operations such as drug trafficking and paramilitary operations. In recent weeks, the FANB has been carrying out intense confrontations to neutralize and expel them.

Certain Colombian authorities and US financed “free press” have taken it upon themselves to demonize the Bolivarian military forces both locally and internationally, and make them seem to be as a band of heartless soldiers attacking civilian populations. But the facts show that the opposite is true.

In a video published on social networks, a member of the FANB can be heard explaining to returnees that both the media and politicians of Colombia are saying that they left Venezuelan territory “out of fear of the State.” But they avoid the fact that they were in fact escaping from the violence of groups from Colombia that have even planted antipersonnel mines and carried out drug-trafficking operations. However, the Colombian State continues with its silence regarding the practices of these terrorist groups and their attempt to disrupt Venezuelan society. The Colombian authorities’ strategy is to launch a smear campaign against the FANB, by insisting that it attacks civilians or that it acts as an accomplice of Colombian paramilitary gangs.

“We are not your enemies”
At the same time, a member of the Venezuelan military corps requested respect from the state authorities that are guaranteeing protection and care, as established in the constitution. Likewise, he reiterated to inhabitants of the sector that the same attention will be received by both foreigners and locals. All are victims of the violence unleashed from Colombia with the tacit consent of the government of that country.

In this border area live many Colombian citizens that are not discriminated against due to their nationality, as Colombian authorities like to do again Venezuelans living on the other side of the border.

Information is not naive
All these interviews, headlines and information must be understood in the context of an unconventional war that Venezuela is facing. It seeks to discredit the legitimate action of the Venezuelan military morally, politically and ethically. It aims to blur the success of the FANB operations to repel these criminal Colombian organizations, that can be used as useful drug-trafficking elements for the dark purposes of Bogotá and the US Southern Command.

What the Colombian media does not tell about the case of Venezuelans displaced to the neighboring country is that they are already returning to their homes. The situation reveals that propaganda is only interested in images that it can manipulate for the war against Venezuela, and that normality or peace are not news.

Analyst Wilfredo Cañizares , defender of human rights in the neighboring country and director of the Progresar Foundation, said that Colombia is a great laboratory for smear campaigns that seemed to be already fabricated against Venezuela and, now, of violent military aggression.