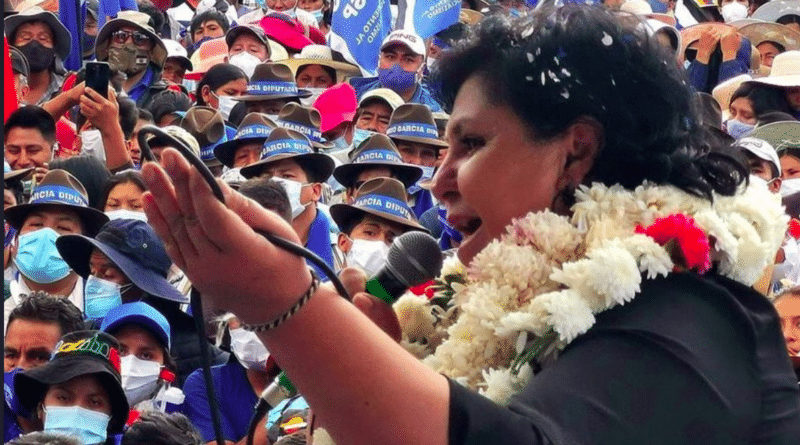 On November 6, 2019, María Patricia Arce Guzmán was viciously attacked by far-right misogynist groups which supported the coup against President Evo Morales Ayma that subsequent led to the  installation of the civic-military dictatorship of self-proclaimed “interim president” Jeanine Áñez.

That day Arce Guzmán was on the verge of being assassinated. She was intercepted and held for hours at the hands of these extremist groups, who also attacked, destroyed and burned the offices of the Vinto Mayor’s Office, which was in the hands of Arce Guzmán by popular mandate after being elected when its population voted for the Movement for Socialism party (MAS).

These extremist groups physically and verbally assaulted her for hours. They beat her, painted her red, cut off her long hair, synonymous with her ancestral beliefs as an indigenous person and her dignity as a woman, and held her hostage throughout this process.

A year ago in the midst of the coup in Bolivia, Mayor Patricia Arce was captured, beaten, had paint thrown on her and her hair chopped off, and was paraded through the streets by right wing thugs who wanted to intimidate MAS supporters.

Yesterday, she was elected Senator 🌹✊ pic.twitter.com/oTjdgqlJbX

After those acts of hatred and fascism, Arce Guzmán was taken to a hospital and later continued her mandate as mayor, as she assured that under no circumstances, and due to no threats, was she going to fail to fulfill the responsibility that her people had given her.

At that time, terrible images were spread of how these criminal groups harassed Arce; but this Sunday, October 18, justice was done for her because the people decided to elect her as senator and embrace her with all their affection in the streets, to show that the good people in Bolivia in the majority, as shown by the electoral result that ended a dictatorship promoted and practically institutionalized by the Organization of States Americans (OAS).

In this sense, Brazilian Workers’ Party Deputy Gleisi Hoffmann highlighted Arce’s victory and recalled the unfortunate acts perpetrated against her in 2019.

“Do you remember the left-wing mayor of the Bolivian city of Vinto, who made headlines around the world after being attacked on the street by far-right radicals during the 2019 fascist coup? Yesterday she was elected senator with an impressive vote! Congratulations colleague María Patricia Arce Guzmán!