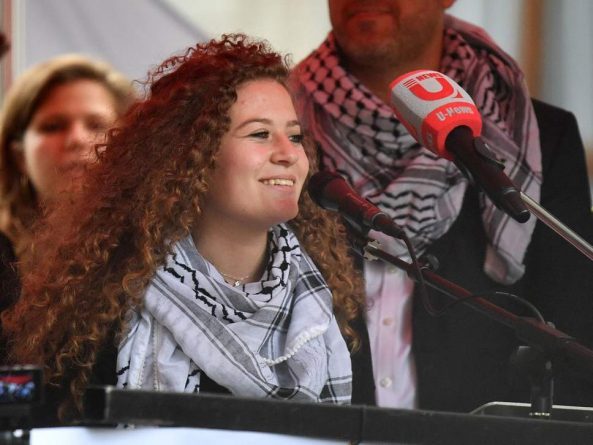 Thousands of people marched in central London to demand a right to determination for the Palestinian people and called for Israel to be held accountable for violations of international law.

The National Demonstration for Palestine followed a week-long exchange of air raids and rockets that killed at least 25 Palestinians and four Israelis.

Palestinian ambassador to the UK Dr Husam Zomlot stood on the stage next to Ahed Tamimi, the protester who became a globally known after slapping an Israeli soldier in the West Bank last year.

RELATED CONTENT: Trump’s “Deal of the Century” Will Use Sanctions, Military Threats to Force Palestinian Acceptance

Speaking to the crowd, he said: “I see British people from the left, from the right, from across the board. You know why? Because this is not a fight between left and right, it’s a fight between right and wrong.”

Ms Tamimi, who will study English in the UK before starting a course in International Law at Birzeit University in Ramallah, told the crowd: “I want to thank you all. It was your voice that kept me strong while being in the Israeli prison. I want to thank you for your support and solidarity, for everything that you are doing to advocate our cause.

“I don’t want to speak today about our suffering. We choose to suffer for freedom and justice. Injustice is everywhere. From the river to the sea, Palestine will be free.”

Ms Tamimi’s father, Bassem, later told The Independent: “It’s very important for us to celebrate the Nakba day to remind the world what the British and the Israelis did to the Palestinians in 1948. We are seeking peace and we will continue our struggle until we get our freedom and justice. We can see here that all the free people are with the Palestinian issue and against the colonization and occupation.”

The event was timed to coincide with a day commemorating the Nakba or “catastrophe” which led to the exodus of several hundred thousand Palestinians following declaration of the State of Israel on 15 May 1948.

Organisers including the Palestine Solidarity Campaign, Friends of Al-Aqsa and Muslim Association of Britain said they were protesting against “unprecedented attacks to the collective rights of the Palestinian people by the Israeli State in alliance with Donald Trump”.

Demonstrators said they believed Benjamin Netanyahu’s election promise to annex the West Bank and Mr Trump’s plans for peace in the region – which he has dubbed the “deal of the century” – were key obstacles to the realization of Palestinian rights.

Israel has repeatedly denied allegations it attacks Palestinians and recognizes settlement building as legal under its own laws. Its authorities have said that airstrikes are carried out to counter militant activity.

Tariq Ali told The Independent: “The UK government is not independent. Britain is effectively a stooge state of the United States. That’s why they’re so nervous about Corbyn, it’s because they know what his views are and they know some things will change if he’s elected prime minister.”

Speaking to The Independent before she went on stage, Diane Abbott said she believed in a two-state solution because it would “allow both Israelis and Palestinians to have freedom”, which she said would bring justice, “because without justice, there would be no peace”.

The crowd of protesters included members of ultra Orthodox Jewish community, the Haredi, who said they were there to show solidarity because they did not support the oppression of the Palestinian people.

Others in the crowd included the group, Football Against Apartheid.

Founder John Tymon said: “We’re trying to unite football fans against apartheid and expel apartheid Israel from Fifa, just like we expelled apartheid South Africa from Fifa. We call on football associations to vote at the Fifa conference on 5 June to expel Israel. It happened in 1976, so it can happen now too.”

There was also a mix of nationalities amongst the crowd of supporters, including 42 year old Indonesian housewife and mother Yumi. She said: “We are here because we want to support the Palestinians. Indonesia has one of the biggest populations of Muslims in the world, so the Indonesian people support the cause of the Palestinian people.”

While most people took a political stance, others were keen to express the humanitarian aspect of their support. Iranian artist and activist Marie Berry, from Bournemouth, said: “It’s crucial they know there are people behind them who care for humanity, who understand it is wrong to harm other human beings and that they are not alone.”