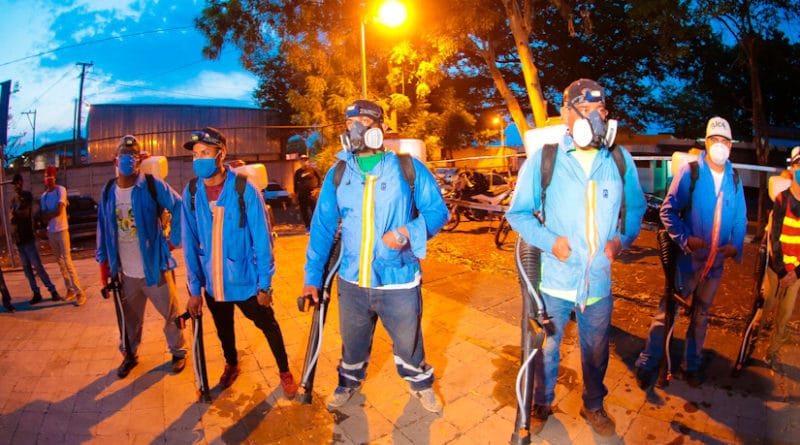 In the current pandemic, Nicaragua’s health workers are split in two. Most nurses and doctors in the public health system work every day, without rest, under tremendous stress, but with great love and commitment, safeguarding patients lives with ethics and total responsibility. But another group of doctors does the opposite and, since March 18, 2020, when the first case of COVID-19 occurred in Nicaragua, they have not rested either. They work not in the hospitals, but instead on a relentless propaganda campaign, led by medical professionals who may wear white coats, but harbor sinister intentions.

Enter stage right – “The government is doing nothing!”

The first stage of their campaign was to cry: THE GOVERNMENT IS DOING NOTHING. They resorted to fear using their status as medical professionals with specializations to give “expert opinion” to Nicaragua’s pro-regime change media and by making astute use of social networks. They repeatedly affirm that Nicaragua’s people are completely abandoned by the authorities and therefore unprotected in the face of this pandemic. Out of their shirt sleeves they slip pseudo-mathematical calculations serving to alarm the population. They predicted 23,000 dead and 238,000 infected by May 10th this year. In fact, the figures for June 9th, 2020 are 1,464 cases with only 55 deaths. The opposition used exactly this tactic of falsely inflating the death toll during their violent failed coup attempt of April 2018.

The second stage has been one of constant attempts to discredit the authorities of the Health Ministry (MINSA) and their own medical colleagues working in the public health system. To this end, they appear behind pompous names of organizations such as the Nicaraguan Medical Association (active since the 2018 coup attempt), a Multidisciplinary Scientific Committee (activated at the time COVID-19 began), the Esteli Medical Society and other more recent ones. All feed the upstart Citizen Observatory organization, which only became known in April 2020.

This organization of medical professionals has precisely one “specialization”, namely giving false numbers of deaths and illnesses, by hundreds and thousands. No sources or names are mentioned because they have no legitimate access to official statistics. Their numbers have a purely Machiavellian logic, claiming hundreds and thousands of sick, dead and buried people every day. They falsely accuse MINSA of not having prepared for the emergency, claiming that the health system has been dismantled, so that supposedly the best option for the population is to stay at home and die.

The most recent stage of their campaign strategy is to serve as birds of ill omen, constantly chattering, repeating death announcements until people are scared out of their wits. They publish lists they have obtained of deceased patients from public hospitals, but not mentioning those who die in their private hospitals. In addition, they have also published a list of doctors and nurses who they say have died up until the first week of June. With that list of their own ex-colleagues, they post photographs, but, as might be expected, doctors who have not fallen ill or died, for example Dr. Rubén Flores Villavicencio and Dr. Guadalupe Joya among others, have publicly denied their demise and brought legal action those behind the campaign of phony deaths. This is nothing new, the opposition did exactly the same in April 2018.

All of these actions are part of the insanity and hatred characterizing Nicaragua’s political opposition. Their strategy aims to convince the Nicaraguan population that these “medical professionals” really are concerned about and working for people’s health. So they pose as if they were legitimate authorities entitled to make public health recommendations, give orders and call for a general quarantine. This tactic aims to achieve what the attempted coup of April 2018 could not. They hope the pandemic will remove Nicaragua’s elected president before the next elections in 2021. For the opposition, the principal objective is to take advantage of the pandemic using the money they have received from the US authorities to “combat” COVID-19 in Nicaragua, more than US$16 million. With this agenda, a small group of doctors, organized and financed by Nicaragua’s political opposition repeat the same message in unison over and over again, amplified by local media coverage, social networks and international news agencies,.

Just as some students were very helpful in starting the failed coup in April 2018, now with the current pandemic, the political opposition has struck a perfect deal with this small group of doctors. All the doctors promoting this “health care coup” have a clear history of resentment and they are overcome with hatred. Lacking medical ethics, instead of giving medical care, they dedicate themselves to smear campaigns and political activism against the government.

In truth, if Nicaragua were indeed filled with so many sick people and suffering thousands of deaths, and if their concern for the health of the Nicaraguan people were genuine, they would offer to work in a coordinated manner with the Ministry of Health, giving their input to the problem in a responsible way. Many private doctors around the world do this. But the Nicaraguan opposition doctors prefer to preen themselves on television, in front of microphones and on social networks, spreading any number of lies so as to create panic in the population.

Why is there so much hatred?

Although Nicaragua’s constitution guarantees the right to public health, in the 16 years from 1990 to 2006, the three neoliberal governments of that period not only reduced the country’s health budget, but they also began privatizing the public health sector, in various stages. Even while dying patients were being laid out on corridor floors in public hospitals for lack of beds, they had to pay for much of the care they received. For some health professionals, especially doctors with specializations, it was a chance to learn how to make money from public sector hospitals.

In 2007 when the Sandinista government returned to office and the right to free, universal health care was restored, a number of doctors were dismissed for dishonestly taking advantage of public resources. That was the beginning of their discontent against the government, which later turned into hatred, even though they have generally done much better for themselves in private medicine and teaching in universities as professors. Some now manage luxury private hospitals and clinics whose services are paid for exclusively in US dollars. For them, health is no longer a human right but rather just another market commodity.

That generation of neoliberal doctors was followed by another smaller group as a result of the violent, failed coup attempt in April 2018. The opposition aligned doctors of 2007 were the teachers and mentors of this second group, who were working in public hospitals. During that failed 2018 coup attempt, they left their jobs in the MINSA hospitals of León, Jinotepe and Estelí and went out to march against MINSA and the government. In August 2018, after popular outcry, MINSA, as an employer in any country in the world has the right to do, dismissed more than 100 doctors in these hospitals.

Minsa did so because their actions prejudiced the health of patients for whom they were supposed be caring. However, even today some doctors who are opposition supporters still work in public sector hospitals and from their workplaces feed false information while also failing to fulfill their duties. This is another strategy the opposition aligned doctors are using, namely, giving sub-standard care to the population seeking help so as to continue to discredit Nicaragua’s public health service, one unique in Central America for investing 21% of its national budget in heath care.

These two successive waves of opposition aligned doctors are leading the current political campaign in Nicaragua. They gladly take advantage of the pandemic to discredit the government, spread alarm and lie to people. They are responsible for the mental and emotional health problems many people in Nicaragua are now suffering, because from the very start of the the pandemic they have been spreading regular doses of insanity every single day. As a result, a great many people in the country have experienced a kind of collective paranoia with all the ensuing negative consequences for people’s health. The opposition doctors’ unrealistic, scaremongering statements are shamelessly taken up by international news media.

Feigning concern for the health of Nicaraguans, in fact the campaign attacking MINSA is an unscrupulous hoax by doctors colluding with Nicaragua’s political opposition, who have never had the least concern for the health of the country’s people. Although obscene, it is a fact that the country’s private clinics and hospitals have benefited greatly from the campaign against the public health system, because it has been a new opportunity to promise health and sell treatment for profit. But once patients with COVID-19 reach a critical state and run out of money, the private clinics and hospitals seek their transfer to public sector hospitals.

It is unethical and illegal from every point of view. In the midst of the pandemic, private sector doctors supporting the country’s political opposition are manipulating people, lying and sowing hatred. No government, no health authority and no doctor in the world was prepared for this global health emergency. Given all the difficulties resulting from the destruction of Nicaragua’s economy in the abortive 2018 coup attempt, attacking the health system now during the pandemic, to the point of damaging it even more, is effectively killing people.

But in addition to this campaign attacking Nicaragua’s health system, the opposition doctors also support calls for more coercive international economic measures so as to impose on Nicaragua an economic blockade until it is financially choked to death. It is completely perverse to exploit the suffering COVID-19 is inflicting on all Nicaragua’s families just so as to get political and economic benefits in the best mafia style. The main objective of Nicaragua’s opposition is to savage anyone who thinks differently and hope to be able overthrow the elected government, imitating similar fascist demands in Spain. In times of crisis, we get to know the best and the worst of human beings. That’s why in this emergency, the opposition doctors’ masks have dropped, discarded in the gutter just like their Hippocratic oath, only to reveal the human wretchedness of their lives.

Forget about them. Honour and glory to all the hospital staff caring day in and day out to our patients in MINSA’s 87 public hospitals, 17 of them built in the last 15 years, 8 of them simultaneously !

Featured image: Members of the 300-strong sanitation squad who work for the Managua city council, Courtesy of El 19 Digital (https://www.el19digital.com).