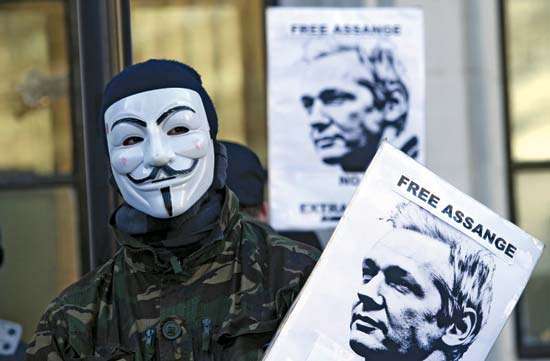 The hackers who spent the weekend cyber attacking Ecuadorian government websites in protest of the arrest of WikiLeaks founder Julian Assange have now turned their attention to the United Kingdom.

On Monday evening both the Supreme Court of the UK and the National Crime Agency websites were offline.

Free Assange or chaos is coming for you!

While the UK government has strong distributed denial-of-service (DDoS) protections in place, the Supreme Court website has currently been down for over an hour and a half along with 1,633 other UK websites hosted on the same server.

Free Assange or chaos is coming for you!

Supreme Court of UK and + 1,633 other UK sites hosted in same server are #Offline too.

None of this was directed by WikiLeaks or Assange himself — the hackers say they are acting on their own as an act of protest.

Speaking to the Gateway Pundit on Sunday, a member of the hacker group who goes by the pseudonym ‘Nama’ declared they will be launching cyber attacks against the United States and Sweden after the UK.

Over the weekend, the group took down or defaced over 30 Ecuadorian websites including the Central Bank of Ecuador, their Ministry of Interior, the Ecuadorian Assembly in the UK and the main website for the Government of Ecuador. They also posted data dumps of 728 identification ID card numbers that appear to belong to people who work in the Ecuadorian government.

Many of the websites, including the Central Bank of Ecuador, have been offline since Saturday.

At this time the Central bank of Ecuador , Ministry of Interior , Ecuador Assembly in UK and the Government of Ecuador still #Offline for 12+ hours.

If their sites comes up we will fire again to #burn their servers. pic.twitter.com/MUBMChbtUv

After the websites had been offline for twelve hours, the hackers warned that if they were restored “we will fire again to burn their servers.”

RELATED CONTENT: Venezuela Blackout Caused by Low Turbine Speed as Result of Cyberattack – Source
The official website of La Maná canton in Ecuador featured a picture of Assange for over twelve hours, along with a quote from him that read, “You have to start with the truth. The truth is the only way we can get anywhere. Because any decision-making based on lies or ignorance can not lead to a good conclusion.”

Nama said that starting Monday his group will begin targeting UK government websites as well as the Ecuadorian sites, “just to show in the world the #FreeAssange message.”

“First we hit their Gov sites with a Botnet to make them unavailable and then we are leaking their stuff,” Nama told TGP.

Asked what their ultimate goal is with the hacks, Nama said “our attacks are just like the riots at the streets with police, but its more powerful because we can damage the government more. We can make them lose a lot of money.”

Responding to if they have a specific message for President Donald Trump, the hacker asserted that “Trump is a troll. He can’t hold the US. Nothing more for him.”

As far as UK officials go, Nama said that the “UK is like the US. We have send already message in UK.”

Prepare for the chaos.

“Free Assange or the chaos is coming,” they warned.

The Gateway Pundit asked Nama if the hackers were worried about eventually being caught and they boldly asserted that they are not.