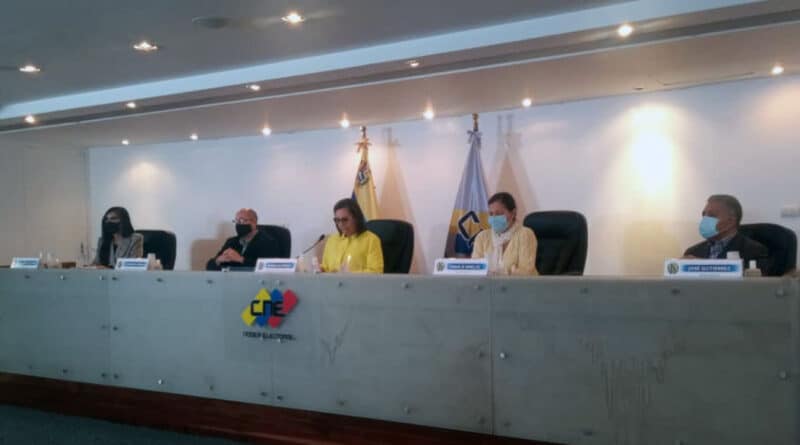 The president of the National Electoral Council (CNE), Indira Alfonzo Izaguirre, presented a detailed balance to publicize the results of the automated registration process for candidates, which remained open until Friday, September 4, thus complying with the extension established by the body.

During a press conference, the first electoral authority reported that more than 3,300 applications were received, with an average of 14,400 male and female candidates participating.

RELATED CONTENT: “I was Not Tortured”: Roberto Marrero Leaves Guaido, US and the “Free Press” Looking Like Liars

CNE rejects foreign interference
The electoral body presented a statement rejecting the interference and illegal claims by the United States government, imposing sanctions on the president of the electoral body, Indira Maira Alfonzo and one of its rectors, José Luis Gutiérrez Parra:

“Faced with the claims of any foreign government to impose, condition, coerce, its senior officials in the performance of their duties without any form of judgment, the Electoral Power based on its democratic and sovereign vocation categorically rejects the illegal sanctions that have been intended to impose.

The document added that unilateral coercive measures are “a flagrant violation of the most elementary principles of international public law, such as respect for the sovereignty and independence of States and the right to self-determination of peoples.” Clarifying that the Electoral Power “has demonstrated with public and visible facts, in addition to being auditable, that its actions remain within the unrestricted adherence of the Constitution and other laws of the Republic.”

Summary of the electoral process to date
Indira Alfonzo also presented a brief summary where she highlighted that since the announcement of the elections, on July 1 of this year, the following aspects have been developed: