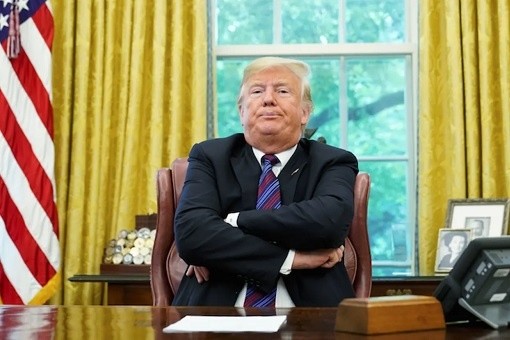 US President Donald Trump said Thursday that he could order a blockade or a quarantine in Venezuela, without offering details.

“Yes, I am,” President Trump repeated up to two more times, without offering further details, when asked by a reporter at the White House about whether he was considering applying a blockade or quarantine in Venezuela, given the degree of involvement of Russia, China and Iran.

These statements occurred on the same day that the Bolivarian National Armed Forces (FANB) denounced a new violation of Venezuelan airspace (air surveillance zone) by a US spy plane. This raid would be number 97 so far this year, as stated by the Strategic Operational Command (Ceofanb).

RELATED CONTENT: A Blockade of Venezuela Must Be Opposed

The US Government has toughened its unilateral punitive measures against Venezuela to pressure Venezuelan legitimate president, Nicolás Maduro, to leave power and put in place Juan Guaidó, the self-proclaimed “interim president” of the Bolivarian country.

US sanctions are expanding the economic crisis in the Bolivarian country. The measures and sanctions have caused the loss of millions, blockages of the accounts of the Venezuelan State abroad, and confiscation of their assets and limiting the possibility of importing food and medicine for the population.

RELATED CONTENT: Diosdado Cabello: “We Will Not Send More Oil to CITGO (+Video)

Different countries, human rights organizations and international entities such as the United Nations Organization (UN) have also undermined the US financial and military pressure campaign against Venezuela, and have expressed their support for the constitutionally elected Government of Maduro.

Caracas, on the other hand, has repeatedly denounced that it suffers an “economic blockade”, encouraged by the White House that has generated a severe crisis in the economy since the beginning of Maduro’s first term, and that has worsened in recent years.