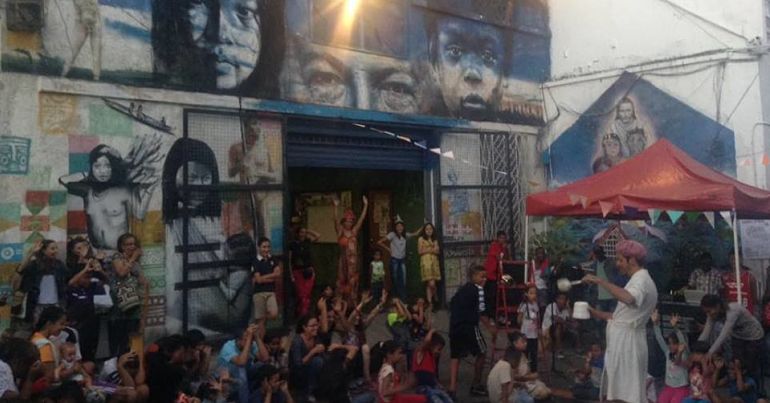 Most journalists who come to Caracas stay in the affluent east of the city, shielded from Venezuelan reality behind the walls of their expensive hotels; behind their imperialist analysis of the country. The Canary, meanwhile, has spent two weeks in Venezuela with one of the country’s notorious colectivos.

Anyone who’s been exposed to the corporate media’s horrendous coverage of Venezuela, might associate the word colectivo with pro-government militias, thugs, or gangs. Though ‘colectivo‘ directly translates as ‘collective’ and can apply to any social organisation, the corporate media has commandeered the word to negatively portray grassroots democratic movements across Venezuela.

Guardians of the Liberator
The Guardians of the Liberator colectivo (GDL) operates in the La Brisa district of Caracas, overlooking Venezuela’s National Pantheon. Inside the pantheon lies Simón Bolívar, ‘liberator‘ of the Americas. Though the colectivo‘s name owes to its physical location, the colectivo sees itself more as ideological minders of Bolívar’s vision for the continent.

GDL leader Jaskeherry Rivas welcomed The Canary into his family home for two weeks, and spoke about the colectivo‘s vision:

Our colectivo is about the continuation and defense of Bolívar’s historical process: of pan-Americanism, of anti-colonialism, of respect for indigenous communities. People try to consign our history to the past. Hugo Chávez helped us rescue this history.
During an initial tour of the house, Rivas signaled to a corner of his second-floor patio. “You heard we’re all armed groups, right?”, he said. “Here, I’ll show you our arms”. He bent down, and unearthed shovels, buckets, and children’s games, turning with a smile. “These are our arms. This is how we fight to sustain our revolution”.

Culture, music, and arts
The GDL is a youth-orientated colectivo incorporating over 170 local families. It organices cultural, music, and arts events for local children, who are among the hardest hit by Venezuela’s economic crisis. As Robert and Emanuel – two young music producers who have opened their own modest home studio – told The Canary:

When I was younger I could take a girl out to see a movie. Right now we’re getting used to seeing those things as luxuries. I try to give my nephews money to buy something, like my uncles would when I was younger, but they can’t buy what I could with that money. It’s sad.

On 23 March, for instance, various youth colectivos hosted a rolling street party through the streets of the west of Caracas. After the party, organizers set up a mobile street stage and performed a comedy and drama show.

Youth colectivos are trying to fill a void left by Venezuela’s economic crisis; to give young people a different life path to one of crime and delinquency. “A group of young people robbed me once as I was walking home from a bar”, Rivas recalled. “They took everything, my phone, wallet. But once they realised it was me, they gave everything back. One of them was crying”.

Social value of work
It’s no exaggeration that Rivas is known by the entire local community. Leaving the house becomes a strenuous affair, as people are constantly milling around, keen to discuss the week’s events. “I don’t formally work”, Rivas explained, “I do informal, unpaid work. This work is socially valuable, yet colectivos are vilified”.

His words recall George Orwell, who wrote about capitalist society’s perverted understanding of labor value in Down and Out in Paris and London:

In practice nobody cares whether work is useful or useless, productive or parasitic; the sole thing demanded is that it shall be profitable. In all the modem talk about energy, efficiency, social service and the rest of it, what meaning is there except ‘Get money, get it legally, and get a lot of it’?

Indeed, the social value of the GDL’s work and the community’s strength is indisputable – and, at present, community solidarity in Venezuela represents a fundamental obstacle to Washington’s imperialist efforts. Some participants nonetheless lament that community events often become politicized, since the organizers are predominately revolutionaries.

War on language
The demonization of Venezuela’s colectivos forms part of a wider and ongoing war of information on Venezuela – and central to any war of information is a war on language. Indeed, the term ‘colectivo’ can describe armed groups, which do exist in Venezuela. The corporate media has nonetheless used the most extreme examples to tar all colectivos with the same brush.

Popular neighborhoods are marginalized. We’re spoken about in terms of ‘savagery’ and ‘uncivilized violence’ – the same discourse as past imperialism. That’s the only image the media paints: that’s exactly what they want to show.
As across Latin America, social organisations in Venezuela are deemed incompatible with the opposition’s US-backed neoliberal project. They are consequently dehumanized, delegitimized, and attacked by a compliant media that categorically ignore their roots, popularity, and social value.

The Bolívarian revolution marches on
Venezuela’s social movements appear far from indoctrinated and violent pro-government loyalists. Most organizers carry a dark humor about their government’s shortcomings and desire further devolution of power to local communities.

They are, nonetheless, proud of the significant social progress made over recent decades – progress that the country’s opposition threatens to dismantle. Faced with such a choice, Venezuela’s popular classes appear ready to struggle for the Bolívar revolution’s survival.

John McEvoy is a global writer for the Canary. He has also written widely about recent British involvement in Colombia in the International History Review, Jacobin Magazine, and Colombia Reports.