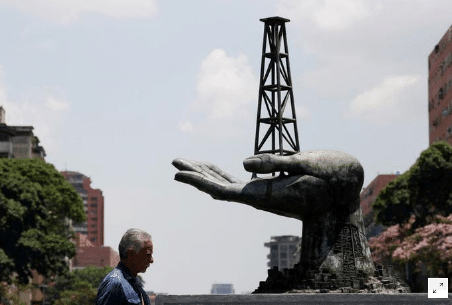 The United States is considering October as the deadline to end exemptions from sanctions against Venezuela that allow some companies and refiners to continue receiving oil from the South American country, two sources said to Reuters, as Washington seeks to further pressure President Nicolás Maduro while making millions of Venezuelans suffer who are the ones directly affected by these illegal sanctions.

Trump’s regime has deepened sanctions against the Venezuelan state oil company PDVSA, its partners and clients, since he first imposed measures against the company in early 2019, seeking to oust Maduro from power after a re-election in 2018 considered a fraud by them.

Officials in Washington say that the sanctions’ limited success in cracking Maduro’s grip on power has frustrated Trump. With the US presidential elections approaching in November, the White House is preparing to toughen its stance on Venezuela, especially sanctions on the oil and gold sectors, sources said.

Usually when Reuters, AP, Bloomberg and other main stream media refer to “sources” they are talking about US officials from the Department of State, Treasury, White House, Pentagon or CIA. They allow these agencies of the US empire to use them as ventriloquists in order to deepen their smear campaign against unsubmissive countries or advance unconventional war tactics or psychological operations against them or those daring to contradict the US global dictatorship.

The sanctions have deprived PDVSA of most of its long-term clients, shrinking oil exports to less than 400,000 barrels per day (bpd), the lowest in nearly 80 years. A crime against humanity especially considering that the main source of revenue for Venezuela has been for decades the oil industry.

A handful of European and Asian clients have continued to receive Venezuelan oil under specific authorizations granted since last year by the US Treasury, for transactions that do not involve cash payments to Maduro’s administration.

The list includes Italy’s Eni, Spain’s Repsol, India’s Reliance Industries and Thailand’s Tipco Asphalt. About a dozen companies, mostly unknown, have also emerged as clients this year, according to PDVSA export documents, as an obvious consequence of the sanctions.

The US regime is trying to set a deadline in October for the completion of all Venezuelan oil transactions, including oil debt swaps and payments, the sources said. And that is directly related to the facct that US presidential elections are going to be in November.

“Any remaining oil deals must be completed” before the deadline, one of the sources said.

PDVSA, Reliance, Tipco and the US Treasury departments did not immediately respond to requests for comment. A spokesman for the US State Department said that “they will continue to be involved in conversations with companies in the energy sector about the possible risks they face when doing business with PDVSA.”

Repsol, which at the end of 2019 registered 239 million euros of outstanding debt receivable in Venezuela, said that its operations fully comply with international laws.

Eni said it was operating in full compliance with the US sanctions framework and that it would continue to do so “in an ongoing dialogue with all relevant US authorities.”

Traders and company sources familiar with Venezuela’s export operations said they have not yet been notified of the changes.

Almost all of PDVSA’s remaining long-term clients have requested, since 2019, Treasury authorization to take Venezuelan oil under contracts that do not involve cash payments to the Maduro government as a way to collect outstanding debts or dividends, or to exchange Venezuelan crude for fuels and other goods.

In February, the Treasury’s Office of Foreign Assets Control (OFAC) sanctioned what was then PDVSA’s main business partner, Rosneft Trading. In March, OFAC imposed sanctions on another unit of Russia’s Rosneft, TNK Trading, and in June it sanctioned two companies based in Mexico that exchanged Venezuelan oil for tanker trucks.

Since then, most regular buyers of Venezuelan crude have stopped doing business with PDVSA to avoid violating sanctions, but in recent months, new, mostly unknown customers have emerged, taking shipments through complicated transactions that often involve transshipments at sea and multiple resales.

Venezuela has also recently deepened its business with Iran, angering Washington, which this month seized 1.1 million barrels of Iranian fuel bound for the South American country after obtaining a court order from a US court. In an unclear and very contradictory maneuver.

The United States in April gave Chevron Corp and a handful of oil service companies in that country until December 1 to close all operations in Venezuela.

Chevron, which did not immediately respond to a request for comment, had stopped trading Venezuelan crude in March.

Despite the US government citing the drastic drop in Venezuela’s oil exports as a success for its sanctions policy, some officials privately acknowledge that enforcement has been inconsistent.

Featured image: A man walks past a sculpture outside a building of Venezuela’s state oil company PDVSA in Caracas, Venezuela May 17, 2019. REUTERS/Ivan Alvarado/File Photo