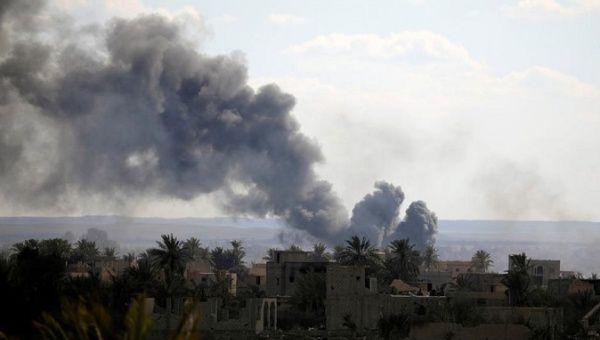 Sources told the media that most of those killed in the attack, which occurred on the al-Baghouz camp in eastern Deir ez Zor province were women and children, according to Syrian Arab News Agency (SANA).

Once again U.S.-led forces have attacked the al-Baghouz camp that was bombed twice on Feb. 11, “killing or injuring” at least 86 civilians in the area.

Last Saturday, Syrian Democratic Forces (SDF) announced the start of the operation to free Al-Baghouz, the last village in Syria controlled by the Islamic State.

In early February the U.S.-backed Syrian Democratic Forces (SDF) said it would begin an operation to free Al-Baghouz, the last Syrian village controlled by the Islamic State. An estimated 300 IS militants are besieged in the village of Baghouz, hemmed in by the Euphrates River and the SDF. In there effort though they have shelled hundreds of civilians.

According to Press TV since U.S.-coalition forces have been bombing Syria to rid the country of IS some 3,222 civilians have lost their lives in the bombings.