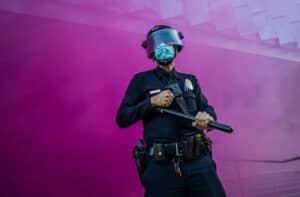 A Police officer is seen with pink smoke behind him, launched by protesters in front of the US Courthouse during a protest demanding justice for George Floyd, Breonna Taylor and also in solidarity with Portland’s protests, in Downtown Los Angeles, California, on July 25, 2020. (Photo by Apu GOMES / AFP) (Photo by APU GOMES/AFP via Getty Images)