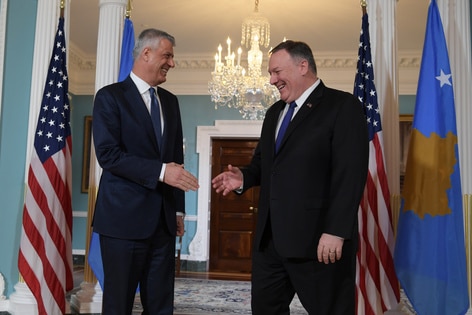 VANCOUVER, British Columbia — The Trump White House was supposed to host a so-called peace summit late last month. It never happened because one of the would-be participants was charged with war crimes in The Hague. The event was subsequently scrubbed from the official calendar and swept away by a news cycle dominated by squabbling over statues and coronavirus cases.

Hashim Thaci, the president of Kosovo, has been charged by special prosecutors with 10 counts of crimes against humanity, including torture, murder, persecutions and enforced disappearance of persons. Thaci had stood side by side with Hillary Clinton at a press conference when she was secretary of state in the Barack Obama administration, and it was during President Bill Clinton’s administration that Thaci made a name for himself as America’s freedom fighter in the Balkans.

What’s been swept under the diplomatic veneer is a war that stands as one of the most grotesque examples of an attack on a foreign country sold to the people of the U.S. as a “humanitarian intervention.”

Whenever the Washington establishment gets itchy for yet another regime-change bender, things always play out the same way: They try to sell the public on the notion that some poor people are being victimized by their own government. We’re told that there’s an alternative. The Washington swamp creatures then hold up a carefully chosen puppet as the alternative to be installed as the head of state after the people rebel. Meanwhile, the U.S. government manufactures domestic revolt by training, equipping and funding “freedom fighters” to overthrow the government and install the puppet.

Thaci was a prominent leader of the separatist Kosovo Liberation Army, which Bill Clinton’s special envoy to the Balkans, Robert Gelbard, described as “a terrorist group.” The KLA was initially criticized by U.S. officials for attacks on Serbian police and other violent acts against the Serbian state. But in 1998, the Clinton administration embraced the KLA as freedom fighters in the campaign to eject Serbia’s nationalist leader, Slobodan Milosevic, from power. Serbia — culturally, linguistically and religiously similar to Russia — was seen as one of Europe’s remaining pro-Russian outposts in the post-Cold War era. NATO was keen to justify its existence as a defender of the West against all things Russian.

Apparently, going from “terrorist” to “freedom fighter” with cash and training provided by the U.S. and its allies wasn’t conducive to keeping Thaci’s ego and ambitions in check. The KLA pursued violence against both the Serbs and ethnic Albanian moderates who wanted peace with the Serbs. Any attempt by Milosevic to retaliate was qualified as aggression. Meanwhile, Bill Clinton hit the airwaves in March 1999 to tell Americans why the U.S. was suddenly bombing Serbian targets.

“We act to stand united with our allies for peace,” Clinton said. “By acting now, we are upholding our values, protecting our interests and advancing the cause of peace.”

Peace through bombing worked so well that the primary U.S. ally from that war is now facing a war crimes trial — and the White House is still trying to host Balkans peace summits more than 20 years later.

But at least the U.S. got another military base out of it. After Milosevic was ousted, Camp Bondsteel rose from the ashes to become America’s main base in the Balkans. A 2002 article in the New Statesman described it as an interrogation site for terror suspects.

Maybe some of those same terror suspects have since become “freedom fighters” against a new enemy du jour? Such is the case with some members of the Iranian opposition, for example. Previously labeled as terrorists by the U.S. government, they’re now viewed by Washington regime-change proponents as the potential leaders of a new government-in-waiting.

Each time the State Department denounces the noncompliant leadership of Venezuelan President Nicolas Maduro, it praises its own puppet, Juan Guaido. And in May, there was a comically failed attempt to overthrow Maduro by mercenaries with connections to the Trump administration.

It’s important to remember that Thaci was once Washington’s man in the Balkans, carrying out the agenda of the military industrial complex and securing a footprint in a place where it previously had none. Today, Thaci is a pariah, a scapegoat. The charges against him blow the lid off the well-worn “humanitarian” regime-change scam. And his Washington enablers belong in a Hague courtroom alongside him.

(Rachel Marsden is a columnist, political strategist and host of an independently produced French-language program that airs on Sputnik France. Her website can be found at http://www.rachelmarsden.com.)