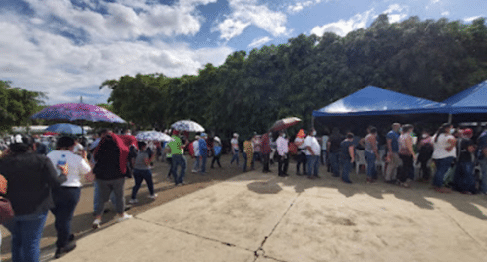 This week the Nicaraguan government announced that starting on October 20th it will be vaccinating children aged two to 17 with COVID-19 vaccines developed in Cuba. As soon as the announcement was made, my phone started buzzing as everyone I know sent each other the news. The excitement is palpable – two to 17 year olds represent nearly a third of Nicaragua’s population, and with this announcement it feels like we are really on the home stretch of the pandemic.

After a slow COVID-19 vaccine roll out in due to unequal distribution of the vaccines around the world, as of early September Nicaragua had only vaccinated 524,000, or about eight percent of the population, and only those over age 45. Finally in mid-September, larger donations of vaccines began to arrive through the COVAX system, the government lowered the eligible age to 30, and set the goal of vaccinating another half million people before October 9th. How’s that coming along? We’re now just a few days away from that goal and Nicaragua is set to surpass it, thanks to excellent organization and thousands of dedicated health care workers.

I got to see this system first hand last week when I got my own COVID vaccine. When the massive vaccinations began, I watched as the lines at five major hospitals in Managua trailed out of the gates, far down the block, and remained long throughout the week. On the fourth day, I decided to try my luck. When I arrived at the Antonio Lenin Fonseca hospital on the Western edge of Managua, the line began at the gate and snaked around all through the hospital grounds. But as soon as I joined in, I could see that the line wasn’t standing still, but rather was in near-constant motion.

Most of the people in line were in their 30s, most dressed professionally or in uniforms, obviously having been given permission to leave work to get the vaccine. There was a buzz in the crowd, and like me, most everyone was on their phones, taking pictures and video, sending texts, calling friends and family to report on the line’s progress. For two hours we snaked through the shade, the sun, a light rain, and then under tents. I could feel the excitement that we were nearing the end of a very hard time, and there was a powerful unity, a feeling that we were all in this together. When we finally got to the front of the queue we were grinning under our masks as we were given our vaccination cards and then shown to the vaccine room where we were quickly jabbed and then whisked back out onto the street to allow for the vaccinations to continue.

We estimated around 10,000 people getting their vaccine – at just one of five hospitals in Managua vaccinating that day, and there are daily vaccines being given out in the rural areas of the country as well.

And soon the kids will be vaccinated, too! Cuba, despite being a tiny country besieged by crippling economic embargoes and attempted coups from the U.S. for more than 60 years, has developed not one but five viable vaccines against COVID-19. In July the U.S. responded to this laudable effort by leveraging the pandemic to attempt yet again to overthrow the Cuban government; and by ramping up the U.S.’s illegal sanctions, including restricting and denying medical aid to the island.

As it always has done, Cuba managed to thwart U.S. attempts at destabilization, and Cuba’s history of steadfast solidarity with other nations once again served it well when its allies came to its aid. Nicaragua – which grows 90% of its own food – responded to Cuba’s difficulties by sending not one but two ships of food to its neighbor, totaling 50 containers of basic grains and 10 containers of vegetable oil. Cuban solidarity activists in the U.S. donated millions of syringes to help with vaccination efforts, and now Cuba has persevered and is on track to have 90 percent of its population vaccinated against COVID-19 by mid-November.

Anticipating this milestone – which puts it far ahead of the lagging efforts of the richest country in the world – what is Cuba doing? Their first move is to reciprocate the solidarity: as soon as they get their folks vaccinated, they are helping their most vulnerable neighbors in Nicaragua.

I can’t help comparing Cuba’s actions in the time of pandemic with those of the U.S., my own home country. By early September, the United States had thrown out more than 15 million doses of COVID-19 vaccines, more than enough to have vaccinated every Nicaraguan twice. The United States had donated vaccines to every country in Central America except Nicaragua, exercising “vaccine diplomacy” because the U.S. wants to overthrow Nicaragua’s democratically elected government.

In the U.S., not only can the system not give the vaccine away, but they can’t pay people to get vaccinated – despite raffling off new vehicles and cash prizes (in North Carolina they raffled off one million dollars to convince people to get vaccinated). The U.S. vaccination rate is currently only 56%. Meanwhile, in Rivas in southern Nicaragua, the police had to intervene when entrepreneurs began holding spots in the overnight vaccination lines, selling them for C$1,000 (US $29).  And yet, despite lack of demand in the U.S., with overabundant availability, the U.S. has begun offering a third vaccine, even while in so many other countries people are clamoring for their first vaccine.

The U.S.’s actions in response to this pandemic are sinful.

Hoarding vaccines during a pandemic is a sin.

Wasting hoarded vaccines is a sin.

Failure to put aside political agendas for the common good during a pandemic is a sin.

Violating the sovereignty of another nation and attempting to destabilize their democratically elected governments is a sin. Doing so while its people are suffering a pandemic, is shameful.

While talking about the U.S. response to the pandemic the other day, my 15 year old daughter said to me, “The problem in the U.S. is that people believe that they are the only ones that matter – gringos think they each live in a bubble, and they don’t understand that we are all in this together.”

Maybe that’s the essence of the difference. The U.S. claims to have all the answers, but its emphasis on the individual and on personal freedoms has meant that during a pandemic the country is fraught with divisiveness that has led to 700,000 deaths as of this week. Meanwhile, Nicaragua and Cuba, the Davids to the Goliath in the north, have understood that even small, poor, besieged countries can do anything if they stand together in solidarity.

Becca Mohally Renk has lived in Ciudad Sandino, Nicaragua, for 20 years, working with the Jubilee House Community and its project, the Center for Development in Central America.

Featured image: People line up at the Lenin Fonseca Hospital for their COVID vaccinations.