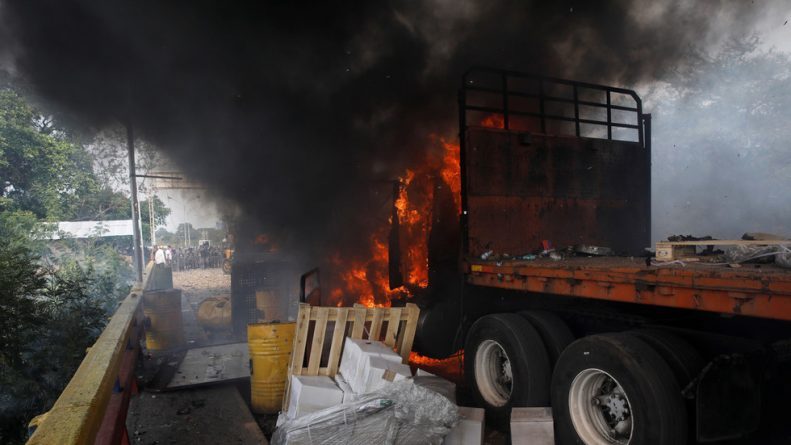 The outrage of burning a truck with ‘humanitarian aid’ for Venezuela galvanized western opposition to President Nicolas Maduro. However, now that mainstream media admit they were ‘misled’ on this, don’t expect any change of heart.
For the Venezuelan opposition and its backers in Washington, the needless torching of an aid truck bound for crisis-stricken Venezuela last month was a made-for-TV moment. How could a heartless dictator willingly destroy aid for his needy people? And when can we do something about it?

As the truck burned on a bridge spanning the Venezuelan/Colombian border, US Vice President Mike Pence said that “the tyrant” Maduro “danced as his henchmen…burned food & medicine.” National Security Advisor and regime change enthusiast John Bolton accused Maduro of sending “masked thugs” to torch the aid crates, while USAID Administrator Mark Green stated with confidence that the Venezuelan leader “ordered the firing on and burning” of the trucks.

#Maduro ordering the firing on and burning of trucks filled with
humanitarian aid & attacking volunteers is unconscionable. I condemn the killings & human rights abuses committed by Maduro. Violent attacks against life-saving aid for #Venezuela is despicable. #EstamosUnidosVE https://t.co/BOSuVP1mTL

Despite the fact that video footage, circulated within a day of the incident, appeared to show an opposition protester tossing a molotov cocktail at the truck, much of the mainstream media was content to go along with the official line. Column inches were given to ‘witnesses’ who saw Maduro’s troops set the convoy ablaze and, in CNN’s case, its reporters claimed to have personally seen Venezuelan riot police fire “incendiary devices” at the trucks. Except they didn’t. While the mainstream media could ignore the independent journalists who first debunked the official story, they couldn’t ignore the New York Times. The Times published an article and video on Sunday all but proving that an opposition protester had burned the aid. In addition, the NYT’s video charted the spread of the ‘Maduro did it’ lie; from unverified video to Washington gospel to media regurgitation. The New York Times’ article – published over two weeks after independent journalists debunked the initial narrative – drew praise from others in the media, some of whom had helped spread the initial anti-Maduro disinformation in the first place.

CNN’s Marshall Cohen called the debacle “a classic example of how misinformation spreads….from an unconfirmed rumor, to the Twitter feeds of top influencers, to the mass media.”

“You have to be f*cking joking with this tweet,” Journalist Glenn Greenwald shot back. “It was CNN – the outlet where you work – that led the way in spreading this lie all over the world. CNN claimed it saw with its own eyes something that never happened. It ignored all the evidence presented weeks ago proving this lie.”

You have to be fucking joking with this tweet. It was CNN – the outlet where you work – that led the way in spreading this lie all over the world. CNN claimed it saw with its own eyes something that never happened. It ignored all the evidence presented weeks ago proving this lie: https://t.co/HzVSTRnlvx

Even the NATO-backed ‘open-source detectives’ Bellingcat – who usually focus on poring over internet photos looking for ‘Russian interference’ – ran an article questioning the bridge showdown and came to the same conclusion as the New York Times. With the media slapping itself on the back for a job well done, can we expect some hard questions about US designs on Venezuela? Will envoy Elliott Abrams’ claims now always be followed with the footnote that he once smuggled weapons to right wing rebels in Nicaragua under the guise of ‘humanitarian aid’? Will opposition leader Juan Guaido’s right to up and declare himself ‘interim president’ of Venezuela be treated with any skepticism? And what about his role in spreading the lie that Maduro’s side had burned the trucks? Will that cast doubt on any of Guaido’s future statements? For the court scribes of Washington, that much is unlikely. Since the New York Times’ story broke, CNN transcribed Guaido’s latest rally address in Caracas, and noted that the Venezuelan Constitution has an article allowing the National Assembly –the country’s relatively powerless legislature– to request foreign military intervention “at the appropriate moment.”

That being said, this was one larger flashpoint of a bigger reality. Maduro ordered his forces to block the humanitarian aid from entering the country in the first place. If the trucks can cross the border, that confrontation probably doesn’t happen and probably there is no fire.

Marshall Cohen was also keen to point out that, despite his network’s earlier lies, Maduro is still the bad guy and is still in some way responsible for the fire. Regardless of the fact that no country would ever dream of allowing in aid shipments from an openly hostile foreign power, at CNN it’s still all Maduro’s fault.

The threat of an imminent US military action against Venezuela has somewhat simmered down with Vice President Pence admitting that there is “no timeline” for regime change, but the official line from the White House remains “all options are on the table.”