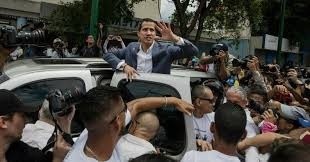 The hot-air figures the U.S. used for its regime change efforts in Venezuela failed to do their job. The New York Times declares their movement “deflated”. Eleven hours after the story went live (and the White House had called?) the headline changed. While it still repeats propaganda claims, the report makes clear that Guaidó is lacking public support:

CARACAS, Venezuela — It was a daring gambit: Juan Guaidó, Venezuela’s opposition leader, stood by a military base alongside dozens of uniformed officers and political allies, calling for a military uprising against President Nicolás Maduro.

Three weeks later, Mr. Guaidó is shuttling among a half-dozen safe houses to escape capture. … And the protests that filled the streets with Mr. Guaidó’s supporters are dwindling ..

Weakened and unable to bring the political crisis gripping Venezuela to a quick resolution, Mr. Guaidó has been forced to consider negotiations with Mr. Maduro. Both sides have sent representatives to Norway for talks, a concession Mr. Guaidó previously rejected.

This change is a turning point for the opposition, which in January had gathered momentum, attracting broad international backing and huge crowds of supporters. Now, that momentum has nearly dissipated — a testament to Mr. Maduro’s firm hold on power even as the country crumbles around him.

The government of Venezuela is talking with some of the opposition parties, there is no confirmation yet that Guaidó’s party, which is the most radical opposition element, is actually involved. It is doubtful that the government would want to ‘negotiate’ with it.

Interestingly the NYT now leaves out the false “interim president” attribute that it previously used to describe Guaidó.

That Guaidó failed with his clownish coup attempt does not mean that the U.S. will give up on its regime change efforts.

Venezuela’s economy is in a deep economic crisis. The cause are not the minor socialist attempts its government made, but the economic war the U.S. is waging against it:

United States sanctions are ravaging Venezuela’s vital oil sector and imports, making it increasingly difficult for Mr. Maduro to govern. The country largely ground to a halt over the weekend because of a lack of fuel — a shortage that Mr. Maduro has blamed the sanctions for.

Luckily no one in Venezuela has yet to die for lack of food. But there are severe problems:

[T]hree years have passed since oil prices plummeted from over US $100 a barrel in early 2014 to around US $40 in early 2015. Three years have also gone by since the first sanctions against Venezuela were implemented by the Obama administration, since being intensified by the current US government. The result has been a combination of these two factors with the enormously complex structure of the Venezuelan food system, which is reliant on imports, heavily colonised by northern tastes and swollen by the oil boom of recent decades. Currently, and despite all efforts, the dynamics of food-access depends on income: those who have more money eat more and better.

In 2015 the opposition used its support from large producers, importers and distributors to create artificial scarcity of food and hygiene products. The government responded by creating the Local Provision and Production Committees (CLAPs) which deliver monthly packages to more that 6 million families:

The CLAP program is an arrangement between the government and grassroots groups aimed at distributing subsidised food and other basic household goods to low income Venezuelan households.

The poor welcome their packages but the more wealthy opposition supporters in the U.S. and on the ground always hate the program:

While Venezuela’s commune movement largely supports the CLAPs, the opposition has long claimed the program discriminates against households that don’t support the government. According to the government, the CLAPs have reduced hunger and food scarcity across the country.

The packages program is means based. But there are also CLAP markets (vid) where everyone can buy. CLAP does not discriminate between government or opposition supporters. It just happens that the poor are not the ones who support the neo-liberal politics the opposition parties prefer.

The Trump administration is now joining the opposition effort to increase the number of people in Venezuela who go hungry:

The United States is preparing sanctions and criminal charges against Venezuelan officials and others suspected of using a military-run food aid program to launder money for President Nicolas Maduro’s government, according to people familiar with the matter.

Sanctions and fraud indictments are under consideration against Venezuelan military officials and politicians as well as Venezuelan business people and foreign partners, the sources said.

Many Venezuelan families rely on the subsidized food program, known by its Spanish initials CLAP, for their basic necessities in the oil-producing South American nation …

How can a Maduro government subsidized food program “launder money for President Nicolas Maduro’s government”? Their is no logic in the argument the Trump administration makes.

The move will be ineffective. It will not help to ‘regime change’ the government. Targeting subsidized food distribution for the poor will not increase support for the opposition. Any disruption of CLAP will be blamed on it. The less the people receive, the more they will dependent on even a reduced CLAP and on other government programs.

It is pure viciousness, not thought through politics, that drives this.