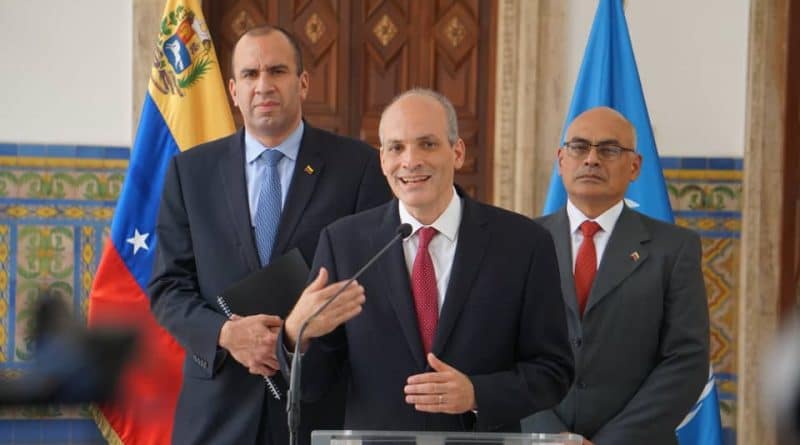 Venezuela asked the UN High Commissioner on Human Rights, Michelle Bachelet to intervene on the basis of her powers so that economic resources belonging to Venezuela that are blocked in international bank accounts are released to address the social needs of Venezuelans.

This was reported by the Sectorial Vice President of Planning of Venezuela, Ricardo Menéndez, after holding a meeting with the UN official in the company of the sectoral vice-president for Social and Territorial Development, Aristóbulo Istúriz, and ministers of these area.

RELATED CONTENT: Chancellor Arreaza Discusses the Impact of the US Blockade With Bachelet

In the meeting held at the headquarters of the Foreign Ministry of the Bolivarian Republic of Venezuela in Caracas, he showed the consequences of the coercive and unilateral measures imposed by the Government of the United States, against the Bolivarian nation.

Menendez explained that, if these financial resources are freed up, social investment can be maximized, such as in the purchase of medicines, food and other needs of the population.

RELATED CONTENT: Venezuelans in Need of Imported Medicines Report Being Targeted by US Sanctions

He indicated that the nation maintains a model linked to respect, sovereignty, democracy, self-determination of the people and rejects the violation of the human rights of all the Venezuelan people.

The Minister explained that the country has been the victim of a systematic attack orchestrated by US imperialism that affects the national economy and the income levels of the Republic.

Bachelet, arrived Wednesday in Venezuela for an official visit that will last until Friday, June 21. The invitation was made on November 8 by the President of the Bolivarian Republic of Venezuela, Nicolás Maduro.