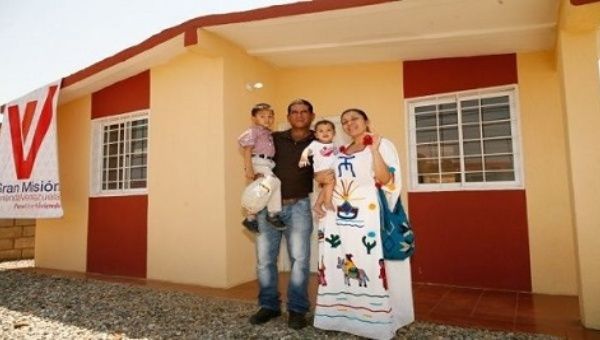 Venezuelan President Nicolas Maduro delivered Wednesday house number 2,800,000 in the Great Housing Mission Venezuela (GMVV) to a family of the town of Araure, located in the central western part of the country.

The GMVV, created in 2011 by late President Hugo Chavez, continues to guarantee dignified housing for all Venezuelans.

“In a beautiful event in Portuguese State, we handed over house number 2,800,000. An incredible goal that we have achieved despite the criminal blockade of the Yankee empire against our country. On the path to 5 million houses for our people!” said the president over Twitter.

Approximately 37 percent of public housing projects in Venezuela have been built by the Bolivarian government and the construction will continue as President Nicolas Maduro has recently approved US$184 million for construction materials for the GMVV program.

This effort by the Latin American nation has not gone unnoticed. During the first United Nations Habitat Assembly that took place in late May in Kenya, the international body recognized Venezuela as one of the top countries to guarantee homes for its citizens.

The GMVV fulfills one of the 2030 Agenda for Sustainable Development goals.

Featured image: The GMVV has the aim to build three million houses in the short term, and five million eventually. | Photo: @Minhvi_Oficial