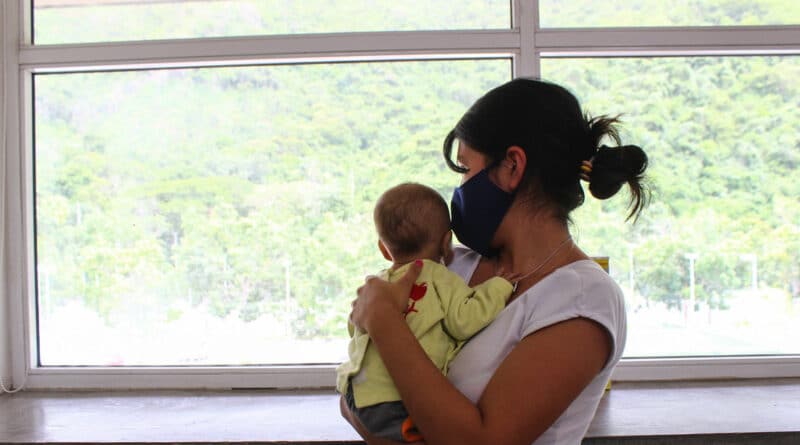 The last few years have been a challenge for the functioning of the hospital, which has had to overcome great obstacles to acquire necessary supplies due to the coercive measures, and which has seen its staff reduced to half.

Yanira holds her seven-month-old baby, who is recovering from a cardiac operation at the Gilberto Rodríguez Ochoa Latin American Children’s Cardiological Hospital, in Caracas, while explaining the procedures the child has undergone. The little boy, who smiles constantly, is just one of the 305 children who have been treated at this health center so far this year, in the midst of the pandemic.

Since its inauguration on August 20, 2006, under the late President Hugo Chávez’s administration, more than 12,000 operations have been carried out in the cardiology department. It is expected that in the present year some 400 operations will be conducted—a figure that acquires a greater significance in the context of the profound effects that both the pandemic and the US blockade have had on the daily lives of most people in Venezuela.

The COVID protocols are strict. Upon entering this hospital, with its long, quiet and well-lit corridors: hand washing, social distancing and masks are a must. After walking through very neat spaces where white predominates, one arrives at the office of the president of the institution, Dr. Isabel Iturria, who spoke to RT about the work of the staff of the cardiological hospital in the midst of the limitations and the global COVID-19 crisis.

Understanding the numbers
The first thing that strikes is the statistics. This year alone, 305 interventions have been performed in the cardiology department. The context gives importance to the numbers because, from 2014 to 2019, Venezuela suffered a brutal economic contraction caused by a 99% drop in its oil revenues as a result of the attacks on the oil sector and the sacking of the assets abroad of the state oil company, PDVSA, in addition to the sanctions.

The largest hospitals in the world, says Iturria, perform between 300 and 400 operations a year, and those that exceed that number belong to a “very select group” of medical institutions. When compared with Venezuela, these data make what the latter nation has achieved, in the midst of great limitations, seem impossible.

But it was not always like this. Before the creation of the cardiology hospital, fewer than 200 operations were performed per year in the country. However, since it opened its doors 15 years ago, the annual average has been 700 to 800 operations (half being surgeries and the other half catheterizations). “The cardiology hospital improved the possibilities of caring for children with heart disease,” said Iturria, who is also a former Venezuelan Minister of Health (2013).

Years ago, there were two annual open tender processes to purchase supplies. This call was attended by a group of companies that had the possibility of bidding. Little by little their presence became more meager.

Iturria explains that “this is an extreme situation and there are things that the provider simply does not supply so as not to expose themselves,” because such things were practically sold only to the cardiology hospital, as pediatric cardiac surgeries are done very little in other institutions in the country.

“Such a procedure eliminates competition and costs us more, because the products arrive through intermediaries,” asserts Dr. Iturria. “This really hurts our country, despite the fact that the Venezuelan government has found alternate routes.”

But it is not just supplies; technology is also necessary for the hospital to function. An example of this is air conditioning in operating rooms, “which has very specific characteristics: it should not only be cold but should also be free from all kinds of pollutants and particles,” Iturria explains. Such equipment has to be imported, and spare parts are no longer sold to Venezuela due to the sanctions.

Hence, maintenance also suffers from the consequences of the blockade. The usual suppliers refuse to work in the hospital, or allege that their parent companies sanction them and do not sell them spare parts if they are for the Venezuelan government. “It sounds incredible but it is the reality,” remarks Iturria.

How much do operations cost?
Operations are free for patients and the hospital covers the costs, which are well below those of private ones. Anywhere in the world an operation like the ones carried out at the hospital can cost up to $40,000.

Iturria explains that for every operation in a Venezuelan private clinic, seven or eight are performed in the cardiology hospital. “That is the other myth that is dismantled, that of the ‘inefficiency’ of the public sector, which seems to be more of a platitude than something with a rational basis,” she adds.

The free of charge guarantee includes the mother of the child as well, whose food is also provided, and the father, who is housed in the hospital residence on the day of the surgery. “It would seem that operations would have to be more expensive here, and they are not,” expresses Iturria. “We do it for free and with technical expertise, but also with affection, with solidarity, with kindness.” Iturria graduated from the Central University of Venezuela (UCV).

To get an idea of the costs, a child’s congenital heart surgery may need 300 different elements. There are some materials that can be re-sterilized but others cannot, because they are very expensive and difficult to reproduce without the original technology.

How does it work?
Something that seems impressive is that, when entering the cardiology hospital, there are no mothers with children in their arms waiting for their turn in endless line. The question is unavoidable: how is such an everyday reality of most other public health centers avoided here?

It has been the result of good planning and the use of computer technology, explains Iturria. Anywhere in the country’s hospitals where there is a cardiology service, the specialist in that area accesses the online system of the Gilberto Rodríguez Ochoa Hospital and enters the data of the patient who requires surgery or catheterization, through the National Registry for Child and Adolescents with Congenital Heart Disease (RENAC).

“Every day we can observe in real time the patients who have been added to that national waiting list, and we can contact them once we have the conditions to be able to operate on them, according to their health conditions,” Iturria explains.

There are certain conditions that may remain in a child for years without any danger to their life, and surgery can be performed once the child is older, while there are other conditions that must be attended to in the first month of a child’s life.

“This way, we optimize resources in the hospital and avoid making the patient travel unnecessarily,” adds Iturria. “We have been doing this since before the pandemic.”

The health professionals who have left
However, there are other statistics of the hospital that are not so encouraging, that also speak of the challenging work done here. The cardiology hospital is working with half or less than half of its original staff because many of the specialists have left the country. “This is a negative balance for the Revolution, which has to be recovered in some way,” states Iturria.

Doctors are highly sought after abroad, she explains, and Venezuelan medics “compete under favorable conditions with those from anywhere in the world and are attracted to countries that offer them better living conditions,” despite the fact that in some situations they fulfill functions far below their levels of expertise.

The training of a specialist can take up to 14 years, including seven years at medical school, a year of rural internship, and postgraduate qualifications, each of three years. “In this hospital, doctors hold an average of two or three postgraduate degrees,” informs Iturria. “Many have left, although I would say that a good part of them would prefer to return to Venezuela.”

“It is a real problem which Venezuela has tried to solve by increasing the number of trained doctors,” continues Iturria. “We have many more trained doctors than ever before in the history of Venezuela.” The main area of expertise is Comprehensive Community Medicine, with a focus on preventive medicine and the promotion of health and an improvement in the quality of life. “This is surely one of the basic elements that have allowed a better control of the pandemic, together with many other measures that have been taken,” she asserts.

So, the question is, how does a hospital with half its staff still function? Iturria credits the accumulated experience of 15 years of the cardiology hospital and the commitment that the doctors and workers have for the institution. This has made things easier. Even Iturria herself has gone back having 24-hour shifts similar to the ones she had as a resident doctor, decades ago. “It is really hard work that we do here,” she says.

The pandemic has also been an extra challenge for which they have had to adapt. Hence, the number of persons accompanying a given patient was restricted, all personnel were vaccinated, and media tools were used to carry out staff instruction and knowledge dissemination activities.